Hans Baer: “Democratic eco-socialism rejects a statist, growth-oriented, productivist ethic and recognizes that humans live on an ecologically fragile planet with limited resources that must be sustained and renewed as much as possible for future generations.” 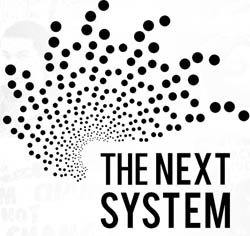 The Next System Project, chaired by Gus Speth and Gar Alperovitz, promotes “thinking boldly about what is required to deal with the systemic challenges the United States faces now and in coming decades.” Its website features a variety of essays on topics related to that goal.

A recent contribution by Australian scholar-activist Hans A. Baer will be of particular interest to Climate & Capitalism readers. In Toward Democratic Eco-Socialism as the next World System, Baer argues for a “concept of democratic eco-socialism [that] constitutes a merger of the earlier existing concepts of democratic socialism and eco-socialism.”

Drawing on Andre Gorz’s concept of “non-reformist reforms” Baer proposes a range of “system-challenging reforms to facilitate a transition from the present existing capitalist world system to a democratic eco-socialist world system.”

“As humanity enters an era of increasingly dangerous climate change accompanied by tumultuous environmental and social consequences, we will have to consider alternatives that hopefully will circumvent dystopian scenarios caused by ongoing socioeconomic, ecological, and climate crises if business continues more or less as usual. This essay proposes the imagining and creating of a democratic eco-socialist world system as a real utopia, not just as a vehicle for creating a safe climate, but a more socially just, democratic, and generally environmentally sustainable world society, as well.

“As noted earlier, democratic eco-socialism rejects the capitalist treadmill of production and consumption, and its associated growth model. Instead, it recognizes that humans live on an ecologically fragile planet with limited resources that must be sustained and renewed as much as possible for future generations. While at the present time or for the foreseeable future, the notion that democratic eco-socialism may eventually be implemented in any society, developed or developing, or in a number of societies, may appear absurd. However, history tells us that social changes can occur very quickly once social, structural, and environmental conditions have reached a tipping point.”

I certainly don’t expect all Climate & Capitalism readers to agree with everything Baer says, but his essay is an important contribution that merits study and discussion among all ecosocialists. It can be read online here, or downloaded as a 29-page pdf. Comments on the paper can be posted below.