An appeal from David Suzuki: The activists who are fighting the Kinder Morgan pipeline expansion need your help now! 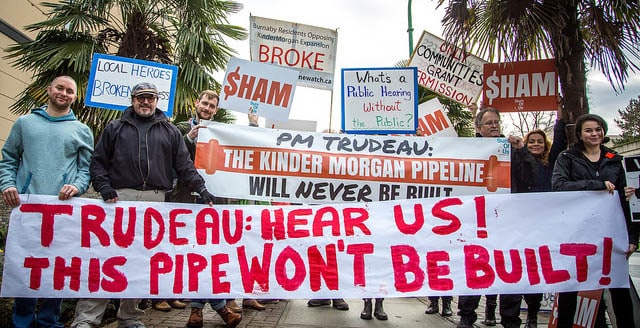 An appeal from David Suzuki: The activists who are fighting the Kinder Morgan pipeline expansion need your help now!

Environmentalist and educator David Suzuki hosts the long-running CBC Television program The Nature of Things. He is a member of the Order of Canada, and a Fellow of the Royal Society of Canada

To whom it may concern:

RE: Defence of Necessity Fundraising for Trans Mountain trial

As the recent Special Report of the Intergovernmental Panel on Climate Change (Nov. 2018) has pointed out, we have no time to spare in averting total climate disaster. Many good people and organizations have spent years trying to persuade our elected representatives to take the threat seriously and act. In 1989, a Parliamentary committee on the economy and environment concluded global warming represented a threat to human survival second only to nuclear war. Yet little was done to thwart the threat. The Harper government (2006-2015) was willfully blind to this critical issue and refused to even discuss it in public. The new government (2015) went to Paris and proclaimed a desire to act and keep temperature rise to 1.5 degrees Celsius by 2100, yet has acted in ways that make such a commitment a farce. Now, the IPCC report sets a target to avoid climate chaos, but it cannot be met by Canada if fossil fuel infrastructure continues to be built.

Close to home, five climate defenders will go on trial in BC Supreme Court on April 15. Rita Wong, Barry Morris, Mel Lehan, Kyle Farquharson and Will Offley are charged with criminal contempt of court for challenging an injunction and blockading the Kinder Morgan pipeline expansion on Burnaby Mountain.

The five are fighting these charges by invoking a defence of necessity and will argue that the imminent disaster of climate change and decades of government failure to act has left them no legal alternative but to engage in peaceful civil disobedience. They hope to be able to establish a precedent in Canadian law and win a verdict that will guarantee other climate defenders the right to employ this defence in future trials. I strongly support their stance, tactics and hopes.

If their case is successful. it could be a significant factor in defeating the Kinder Morgan expansion, and thereby contribute significantly to the world-wide climate action that is so drastically needed.

This trial will involve thousands of dollars in legal expenses. If they are convicted. as appears likely. those costs will rise to tens of thousands to enable an appeal. I strongly urge all organizations and individuals concerned with climate change and the protection of our atmosphere to contribute what they can to this defence.

An appeal from the defendants

We are five land & water protectors arrested for opposing the Trans Mountain Pipeline Expansion. As citizens of conscience, we had no choice but to breach a court injunction in our efforts to stop the Trans Mountain pipeline expansion. We are guilty only of trying to protect our communities & relatives around the world threatened by global warming. To that end we are pleading not guilty by virtue of necessity. Our goal is to change Canadian law & set a precedent so that the courts take climate change seriously.

What is a defence of necessity?

Laws exist so that we may live peacefully and justly together as a society. However, sometimes it’s necessary to break the law to prevent a more serious harm from happening. For example, if you were trespassing on private property in order to save someone’s life, you might invoke a defence of necessity because you had no reasonable alternative to breaking the law. This applies to humanity collectively: we face extinction if we don’t stop climate destabilization from fossil fuel expansion. Defences of necessity & lawful excuse have been used successfully in the US & the UK, but are relatively untested in Canadian courts.

The Trans Mountain pipeline expansion would increase Canada’s greenhouse gas emissions, making it virtually impossible to fulfill the emissions reduction targets to which our government agreed subject to the 2016 Paris Accord. The new pipeline would intrude on the unceded traditional lands & waters of the Tsleil-Waututh, Musqueam, Squamish & many more First Nations, violating their sovereignty & the duty of the governments to meaningfully consult with them. It would hasten the extinction of orcas & other endangered species. Overall, the project poses an unacceptable risk to not just Burnaby residents, but all communities exposed to the hazards of fire, explosions, toxic leaks, & climate destabilization that experts have warned the National Energy Board & the government against.

We all need to stop this expansion.

In the service of personal & social consciences, it is unjust to punish people for breaking a law in order to prevent a far greater harm & crime: the destruction of the capacity of our planet to sustain human civilization. We are guilty only of trying to protect our communities, relatives, & all other living species.

We expect the cost of mounting this defence at trial will be at least $10,000.

All donations will be held in trust by Burnaby Residents Opposing Kinder Morgan Expansion (BROKE).

To donate online go to www.BrokePipelineWatch.ca. Click on “donate,” & add “CND” after your last name when filling out the form.