‘Farming, Food and Nature’ offers a powerful critique of industrial livestock production, but fails to challenge the profit-system that drives it. 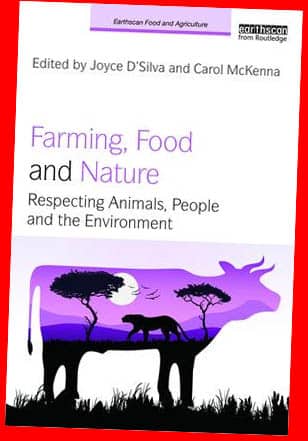 Agriculture is a fundamental issue for society. Those who work in agriculture — whether they are peasants in South America, laborers on farms in North America or workers in a chicken processing factory in Europe — support all of wider society. But agriculture itself fundamentally transforms the world around us. Even the earliest forms of farming changed the natural world in order for communities to feed themselves. Today, agriculture is dominated by industrial farming, which has a significant impact upon our planet’s ecological systems, biodiversity and its people. Yet despite the impact and centrality of farming to our society and the current environmental crisis, the subject is under-represented in discussions of sustainability.

So I was pleased to see Farming, Food and Nature, a book that brings together essays by contributors to a conference organised by Compassion in World Farming (CWF) and the WWF. Many of the contributors have long track records in campaigning about animal welfare, the environment, sustainable farming and the environment so I had high hopes for the book.

In an opening chapter Philip Lymbery, author of Farmageddon and a leading campaigner with CWF, puts the case very strongly. Could we solve climate change without fixing the industrial food system? His answer is an emphatic, “No.”

“The real challenge is to recalibrate the world’s food system to be around feeding people rather than the industrial production of commodities to feed landfill, cars and factory farms.… According to UN data, the world already produces enough food to feed up to 16 billion people…. The problem is that much of it is wasted; and the biggest form of food waste on the planet is in feeding human-edible crops to industrially reared animals…. We waste enough food to feed an extra four billion people on the planet. That’s not to say that four billion extra people is a good idea: it is not. What it shows is that without factory farming, we could feed everyone with better quality food using less farmland, not more.”

This theme dominates most of the book, and it is, in my opinion, the book’s central weakness. Most of the authors follow an argument that I can sum up with a crude equation:

Tony Juniper of the WWF, takes up the theme in “Biodiversity, Extinction and Livestock Production.” Beginning with global increase in population as a driver for environmental destruction he continues by highlighting the impact of livestock agriculture on biodiversity.

“10,000 years ago about 99.99% of terrestrial vertebrate biomass was comprised of wild animals, today about 96% of terrestrial vertebrate biomass is comprised of humans and their domesticated animals. A high proportion of those captive animals dwell in factory farms, where they are reared on crops grown with impacts on habitats, water, energy and soils. In the oceans too several serious changes are taking place because of land-based factory farming on animals. These include coastal pollution and the depletion of some fish populations to feed captive animals, including farmed fish.”

Juniper is right to highlight the disastrous impact of agriculture on biodiversity —if anything the situation is far worse that this passage suggests. Other articles in the book emphasis the impact of industrial farming on bees, fish populations, forest cover and so on.

Juniper calls for a “reassessment of the place of livestock products in our collective diet.”

“The industrialized model of food production is no longer fit for purpose, including the manner in which we produce livestock products. It is literally unsustainable. The big question is whether it will end through a carefully thought through transition to a new system, or if it will collapse.”

Unfortunately, he doesn’t explain what he thinks that alternative might be, instead we are referred to his 2016 book. Though he says that “leaders and opinion formers” have to think through “outdated frames of reference” to solve this problem, it is disappointing that he doesn’t include farmers, agricultural workers or peasants among those decision makers.

The focus on people as consumers, rather than producers within a wider system, means that most of the authors have a limited vision of how change can come about. Jean François Timmers, in an article that highlights how the Brazilian Cerrado, an enormous and ancient savannah that is home to five percent of the world’s species, is threatened by the rapid expansion of grazing pasture begins by arguing “our appetite is actually our largest single impact on the planet.”

Many of the articles focus on the growing demand for meat as part of more affluent diets. This, as several authors highlight, has numerous problems caused by the inefficiency of animal agriculture, the over-reliance of fertilizers and pesticides and the health problems caused by the massive use of antibiotics — far greater than in human health services.

But those who argue that we should simply abandon meat consumption and agriculture often neglect wider issues. Jimmy Smith, however, notes the importance of animal-source foods for 750 million people who are undernourished — “30% of the world’s protein comes from animal source foods.” He highlights that “most of the developing world’s staple cereals could not be produced without manure.” I’d add the central role of animals as beasts of burden, for plowing and transport for large areas of the globe.

Similarly, Donald Broom asks if we “should we stop animal production and just produce plants,” and shows that the issue is complex:

“We should reduce animal production. However, approximately 45% of land in the world is good for producing food for herbivores but not for producing plants as human food. If we stopped production of animals for human consumption, this land would product almost no food for people. The remainder of the land would have to be farmed more intensively and there would probably be major food shortages.”

Several articles rightly highlight the appalling treatment of animals in industrial agriculture. Articles on beef, chicken and fish farming demonstrate that mass production causes stress, suffering and pain for these creatures. But I wasn’t convinced by pro-Vegan arguments that suggested that many animals display sentience so they shouldn’t be eaten. Is this an argument to stop killing rats or locusts too?

The focus on animal agriculture leads to other curious omissions and weaknesses. For instance, in their chapter on “The case for veganism,” Andrew Knight and Jasmijn de Boo write:

“The systemic exploitation of non-human animals also entraps many humans: for examples those who work in slaughterhouses or in oppressive conditions in the fishing industries of certain nations.”

What about the low pay, long hours and appalling conditions of those who pick fruit or vegetables? There are many examples of agriculture trade unions or peasant organisations that have fought to improve conditions and pay. To suggest that only animal agriculture is problematic conceals the wider, systemic, problem with all capitalist agriculture.

This book’s strong point is its exposure of the environmental and social problems caused by industrial agriculture. But its weakness becomes apparent if you look for two words: profit and capitalism. What almost all the articles fail to do is show how the destructiveness of industrial agriculture is a result of capitalism. The drive for profit means that companies are forced, in competition with others, to cut costs, increase hours, cram more animals onto land or into giant sheds and use chemicals to artificially bloat and fatten them up. The drive to produce more meat by feeding human edible crops to animals arises because it is more profitable and fits into a capitalist narrative about what a proper diet is.

The solutions offered here are to encourage people to buy better foods, or pressure for improved legislation. But none of this will be enough to challenge the food system itself. On the two occasions the word “profit” is used in this book it is to highlight that businesses can make money from vegan or vegetarian alternatives. None of the authors see the quest for profits as the heart of the problem. The only mention of capitalism comes in a chapter by Martin Palmer, of the Alliance of Religions and Conservation, when he notes that the UN’s Sustainable Development Goals were denounced by faith representatives as being about making “consumerist capitalism a little bit nicer.”

Sadly, too many of the articles here share that weakness. Doubtless a sustainable and healthy food system will mean consuming less meat, but it will also require empowerment of the food producers who must be part and parcel of challenging, and ending, the capitalist farming system for the sake of our diets and the planets’ future.