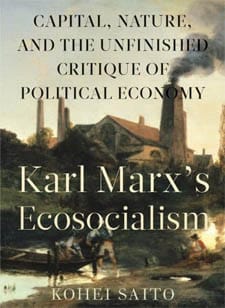 I’m thrilled to report that Kohei Saito’s brilliant book, Karl Marx’s Ecosocialism: Capital, nature, and the unfinished critique of political economy, has won the 2018 Deutscher Memorial Prize. The prize, named for the great Marxist scholar and historian Isaac Deutscher, is awarded annually to “a book which exemplifies the best and most innovative new writing in or about the Marxist tradition.”

Recent winners have included Andreas Malm for Fossil Capital; Tamás Krausz for Reconstructing Lenin; Sam Gindin and Leo Panitch for The Making of Global Capitalism; David McNally for Monsters of the Market; and David Harvey for The Enigma of Capital.

Saito’s book is a major contribution to the development of Marxist ecosocialism. Earlier this year, I wrote this about it:

“In a recent C&C article, Essential Books on Marxism and Ecology, I identified two books, Marx and Nature by Paul Burkett, and Marx’s Ecology by John Bellamy Foster, as foundational contributions to our understanding of Marx’s views on the relationship between society and nature. Those books, published in 1999 and 2000, initiated a new wave of work by scholar-activists who, in Burkett’s words, ‘consider people-nature relations from the standpoint of class relations and the requirements of human emancipation.’

“Those important books are now joined by a third work from Kohei Saito, an associate professor at Osaka City University. Saito has been deeply involved in editing Marx’s previously-unpublished notebooks for the massive new Marx-Engels Gesamtausgabe, and his work on that project is the basis of his extension and deepening of the work begun by Burkett and Foster. His 2016 doctoral dissertation was the basis of his book Natur gegen Kapital: Marx’ Okologie in seiner unvollendeten Kritik des Kapitalismus, now published in English by Monthly Review Press as Karl Marx’s Ecosocialism: Capital, nature, and the unfinished critique of political economy.

“On the basis of his detailed study of Marx’s published and unpublished works, Saito argues convincingly that ‘Marx’s ecological critique possesses a systematic character and constitutes an essential moment within the totality of his project of Capital … it is not possible to comprehend the full scope of his critique of political economy if one ignores its ecological dimension.’ His study shows not just what Marx thought about the relationship between society and nature, but how his views developed and changed over time, as he deepened his understanding of the latest findings in natural science.”

Climate & Capitalism extends its congratulations to Kohei Saito for this well deserved honor.

“I am pleased to announce that Kohei Saito has won the 2018 Deutscher Memorial Prize for his book, Karl Marx’s Ecosocialism: Capital, Nature, and the Unfinished Critique of Political Economy. Published by Monthly Review Press. It is not only a path breaking work of outstanding scholarship, but it is also of the greatest relevance today as humanity faces multiple environmental catastrophes. Saito lays to rest, once and for all I think, the notion that Marx was a Promethean, a man who believed that we can bend nature to our wills. Quite the contrary, as Saito shows, building upon the seminal work of John Bellamy Foster and others and relying on previously unexamined notebooks of Marx himself.

“This is the second MR Press book to win the Prize; the first was Tamás Krausz’s Reconstructing Lenin: An Intellectual Biography. It takes a great deal of work to see a book through to publication. We do this with what any other Press would consider a skeleton crew. For this book, let me thank Martin Paddio, Susie Day, John Foster, Brett Clark, John Mage, and John Simon, along with Erin Clermont, our copy editor. But mainly, let me thank the author. I might add that Kohei sent us the book in English, which is his third language. Remarkable!”