“Saito’s work makes it even more difficult to argue that there is something fundamentally anti-ecological about Marx’s analysis of capitalism and his projections of communism.” 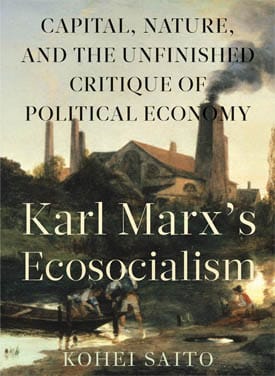 INTRODUCTION by Ian Angus. In a recent C&C article, Essential Books on Marxism and Ecology, I identified two books, Marx and Nature by Paul Burkett, and Marx’s Ecology by John Bellamy Foster, as foundational contributions to our understanding of Marx’s views on the relationship between society and nature. Those books, published in 1999 and 2000, initiated a new wave of work by scholar-activists who, in Burkett’s words, “consider people-nature relations from the standpoint of class relations and the requirements of human emancipation.”

Those important books are now joined by a third work from Kohei Saito, an associate professor at Osaka City University. Saito has been deeply involved in editing Marx’s previously-unpublished notebooks for the massive new Marx-Engels Gesamtausgabe, and his work on that project is the basis of his extension and deepening of the work begun by Burkett and Foster. His 2016 doctoral dissertation was the basis of his book Natur gegen Kapital: Marx’ Okologie in seiner unvollendeten Kritik des Kapitalismus, now published in English by Monthly Review Press as Karl Marx’s Ecosocialism: Capital, nature, and the unfinished critique of political economy.

On the basis of his detailed study of Marx’s published and unpublished works, Saito argues convincingly that “Marx’s ecological critique possesses a systematic character and constitutes an essential moment within the totality of his project of Capital … it is not possible to comprehend the full scope of his critique of political economy if one ignores its ecological dimension.” His study shows not just what Marx thought about the relationship between society and nature, but how his views developed and changed over time, as he deepened his understanding of the latest findings in natural science.

Given the importance of this research, we were very pleased to receive Paul Burkett’s notes on Karl Marx’s Ecosocialism, and even more pleased that he has allowed C&C to publish them. His insightful comments are both an introduction to Saito’s work, and an explanation of why it belongs on every ecosocialist’s list of must-read books.

Paul Burkett teaches economics at Indiana State University. In addition to Marx and Nature, he is the author of Marxism and Ecological Economics, and, with John Bellamy Foster, of Marx and the Earth: An Anti-Critique.

This book contributes to the ongoing reconstruction of ecological Marxism, based on the study of how ecology entered into the development of Marx’s critique of political economy. Building on prior work by John Bellamy Foster and me, Kohei Saito provides a detailed textual exploration of the nexus between Marx’s value-based analysis of capitalism and Marx’s studies of natural science.

He shows that Marx’s interest in natural science was not a mere diversion from his main work completing Capital, but was rather crucial to Marx’s deepening emphasis, as his work proceeded, on the ecological and social unsustainability of a society dominated by the reified relations of wage-labor, money, and market exchange.

Saito also shows very clearly that Marx’s analysis of the metabolic rifts (violations of ecological sustainability conditions) created by capitalism was closely bound up with his growing interest in capitalism’s systematic underdevelopment of colonized and neo-colonized areas as it expanded around the globe. In other words, there is a tight connection between metabolic rifts and ecological imperialism in Marx’s thinking.

This, in turn, sheds new light on the “late Marx’s” interest in pre-capitalist formations such as the Russian mir (rural commune), as offering potential clues to a rational management of the human-nature productive metabolism under communism.

Saito shows that Marx’s coordination of his natural science and political-economy studies enabled him to move beyond the relatively non-historical concept of human alienation (from labor, nature, and society) that he had sketched out in his 1844 notebooks under the influence of Feuerbach’s generic anthropocentric notion of human species-being (and religion as an alienation of human-species capabilities).

It will surprise those familiar with standard ecological criticisms of Marx to discover that it was the materialist, natural-science based character of the mature Marx’s analysis of capitalism that moved his thinking further and further away from “Promethean” optimism regarding the potential for humanity to technologically overcome all natural limits to production. (Saito shows this most clearly for agricultural production, but the point is more general.)

Marx’s awareness of ecological sustainability conditions, of the tendency of capitalism to violate these conditions, and of the need for post-capitalist society to rationally manage its metabolic interactions with nature, became deeper and more serious as he moved away from the more heavily ethical and generic human-speciesist thinking of his younger period. In light of various charges of speciesism against Marx, it is interesting that his analysis became less generically speciesist as his political economy developed under the influence of natural science.

Saito also usefully points out that the nineteenth century context of industrializing capitalism was not as overwhelmingly optimistic on environmental issues as is commonly asserted by today’s social ecologists. Natural scientists such as Lieibig and Fraas, and even political-economists like Jevons, broached issues of agricultural and industrial sustainability, and even of human-caused climate change, in terms that many of today’s “climate deniers” would find quite alarming. Marx was acutely aware of such concerns in the scientific community and critically built them into his work on Capital.

Obviously, this made it more difficult for Marx to complete his magnum opus, which makes it all the more important to study his unpublished writings and notebooks to see how he attempted this grand synthesis — since this may provide some clues as to how such a methodology can be applied in our own time of planetary crisis.

This is exactly what Saito does, as he incorporates into his narrative not only the “standard” writings of Marx that were unpublished in his own times (such as the Grundrisse, and Theories of Surplus Value) but also some of Marx’s notebooks that have only recently become available under the rubric of the Marx-Engels-Gesamtausgabe (MEGA) project. Saito’s reconstruction is informed by Marx’s ecological and other notebooks through the year 1868, i.e. one year past the initial publication of Volume I of Capital.

But Saito’s narrative is not a one-sidedly “scientist” reading of Marx. He emphasizes that the element of human alienation present in the young Marx was not abandoned, but historically and materially deepened as Marx proceeded with his analysis of capitalism and projections of communism.

Despite the relatively non-historical character of alienation in his early thinking, the young Marx had emphasized that alienation was based on a social separation of workers from the land and other necessary conditions of production. Accordingly, the young Marx had insisted that communism must involve a communally organized reunification of workers with nature, as well as with their own labor and its products.

As Marx brought more and more natural science into his analysis of capitalism, this early conception of alienation from and reunification with nature was not abandoned but rather recast historically and materially. Marx now closely investigated how humanity’s metabolic interchange with nature was materially reshaped, and rendered unsustainable, by reified social relations of wage-labor, capital accumulation, and competition. Accordingly, these reified relations were now seen as the main barrier to a de-alienation of nature in line with sustainable human development.

In short, contrary to the assertions of many contemporary social ecologists, Marx’s pro-ecological thinking was not limited to his early writings. Although an important kernel of Marx’s ecology (alienation/de-alienation from nature) was indeed present in his early writings, this kernel was only developed substantively with Marx’s mature work on political-economy as informed by natural science and a detailed theorization of capitalism’s specifically reified relations of production, exchange, and distribution.

For example, Saito details how Marx became closely engaged with the work of Liebig and Fraas on agricultural sustainability, including the controversy between them concerning the relative importance of direct soil-fertility mismanagement (robbery of minerals from the soil and failure to recycle them) and climactic and topographical factors (deforestation and desertification).

It is in this context that Marx and Engels became increasingly interested in the question of climate change induced by human activities such as deforestation – as reflected, for example, in several references to deforestation in the manuscripts for Volumes II and III of Capital.

Saito clearly demonstrates how Marx’s engagement with agricultural science influenced his rent theory, his conception of capitalistic metabolic rift, his sketches of sustainable production under communism, and his later investigations of pre-capitalist communal forms of rural organization in his ethnological notebooks.

In sum, Saito’s work makes it even more difficult to argue that there is something fundamentally anti-ecological about Marx’s analysis of capitalism and his projections of communism. Saito’s book also establishes a framework for the further reconstruction of ecological Marxism at the methodological level, as more of Marx’s (and Engels’s) post-1868 notebooks become available through the MEGA project.

The light being shed on Marx’s pioneering investigations gives us important clues as to how we can critically integrate natural scientific developments into our analyses of and struggles against capitalism as it pushes the planet into multiple crises of sustainability.

More than ever, as Saito emphasizes, it is necessary for those engaged in ecological and social struggles to clearly distinguish the sustainability of capitalism from the sustainable development of human beings rationally managing their metabolism with nature.

As climate change and other biospheric tipping points are more and more clearly surpassed, it becomes obvious that the crisis we face is one in which capitalism can only sustain itself by expropriating, destroying, and eviscerating the conditions required for sustainable human development.

The struggle for non-capitalist alternatives is now synonymous with the struggle for human life-values, including a healthy co-evolution with non-human species, on a global scale.