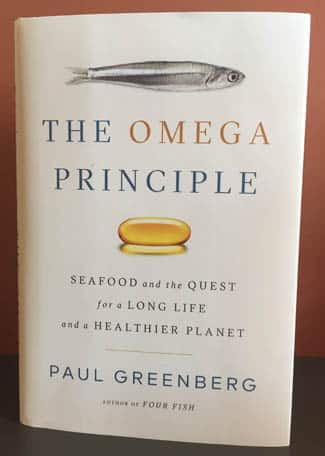 Paul Greenberg
THE OMEGA PRINCIPLE
Seafood and the Quest for a Long Life and a Healthier Planet
Penguin Random House, 2018

Don’t be fooled by the title.

Despite appearances, The Omega Principle is not yet another volume of pseudo-science promoting fish oil as a miracle cure for everything from diabetes to depression to heart attacks.

Nor is it a muck-raking expose of the multi-billion dollar “supplements” industry that makes close to half its revenue by peddling fish oil pills — although there is an illuminating chapter on the non-prescription pill pushers whose major concern is how to make unjustified health claims without actually lying.

Omega-3 names a family of essential fats — your body needs them but can’t make them. They are produced only by plants, including some vegetables and grasses, but primarily by the single-celled phytoplankton that also produce more than half of the oxygen we breathe. Most of the omega-3 oils in supplement capsules are squeezed from the bodies of small fish that eat phytoplankton, including anchovies, capelin, menhaden and sardines — and increasingly, as those species have been overfished to near-extinction, from the tiny krill at the bottom Antarctica’s food chain. As a recent report explains:

“Using giant industrial factory-ships, seafood companies are literally vacuuming the oceans by sucking up the krill that other marine creatures depend on. Simultaneously, Antarctic ice is melting due to climate change, depleting the krill’s ice algae food source. The end result is that since the 1970s, the krill population has already dropped by 80%.” 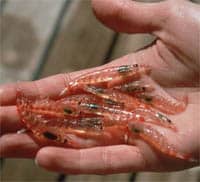 A handful of krill

The alternative health business is the most visible purveyor of omega-3 fish oils, but it is a small part of a much bigger industry that grinds small fish into oil and meal for purposes other than human consumption. As Paul Greenberg shows in his very readable new book, “today, one in every four fish caught on earth is ‘reduced’ into oil and meal and used for agriculture, land animal husbandry, and, most recently, fish farming or ‘aquaculture.’”

Until the 1950s, most pigs, chickens and cattle ate grass, which provided all the nutrients they needed. Today, pasture grazing has been replaced by concentrated animal feeding operations (CAFOs) in which they are fed corn, which fattens them for market much faster and more cheaply, but has nutritional consequences that Greenberg describes.

“Transitioning grazing animals to a high-energy, nutrient-poor diet based on corn has health consequences for livestock. But it turns out that fish, whose flesh contains not only omega-3s but also protein and a host of other amino acids, can act as nutritional compensation for the dietary elements grazing animals lose when they are removed from pasture and put on corn.”

For that reason, the industry that captures billions of tiny fish and grinds them into oil and mush has grown massively, in parallel with industrial agriculture. I found myself summarizing the outrageous ecological absurdity of this in a few lines.

Oceans are plundered for small oil fish,
depriving other marine animals of food,
to produce supplements for land animals,
that are fed on nutrition-poor crops,
that require huge quantities of industrial fertilizer,
that causes dead zones in seas around the world,
and contributes to global warming,
killing the plants that small oil fish eat.

As Barry Commoner wrote decades ago, the first law of ecology is, “everything is connected to everything else.” When profit-maximizing corporations ignore those connections, which they usually do, the result is environmental disruption and destruction.

In their excellent book The Tragedy of the Commodity, Longo, Clausen and Clark attribute the overfishing of salmon, tuna and other large fish to the “ceaseless drive for accumulation in capitalist commodity production” that “tends to simplify natural processes and ecosystems, imposing a division of nature to increase economic efficiency.”

The Omega Principle, a popularly-written book that will be accessible to a broad audience, can be read as an extension of that argument. Paul Greenberg combines vivid eyewitness reporting on the oil fish industry from Norway to Peru to Antarctica, with insightful accounts of the history and ecological consequences of the industry’s growth. Although he never mentions or challenges capitalism as such, he provides a powerful and disturbing picture of an important but little-known side of a system whose profits depend on disruption of Earth’s life-support systems.