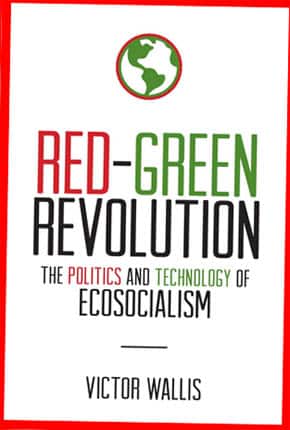 For 20 years, Victor Wallis was managing editor of the journal Socialism and Democracy, and he has been writing about ecological issues, from a Marxist perspective, for longer than that. He has a well-earned reputation for clear thinking and writing about capitalist eco-destruction and how we can stop it.

Red-Green Revolution brings together and updates nine essays on ecosocialism theory and practice, first published between 1997 and 2017. Most originally appeared in small circulation journals or in languages other than English, so they will be new to most readers. Together they constitute an important contribution to the growing ecosocialist movement. It’s a book will definitely be added to the next revision of Climate & Capitalism‘s list of Essential Books on Marxism and Ecology.

I’m particularly struck by Wallis’s focus on practical questions, his ability to build on ecological Marxist theory and address vital questions about how to build what he calls “a mass ecological constituency,” and what measures such a constituency will need to implement to stop the slide towards environmental catastrophe. He asks essential questions  — What can we do without? How can we make better use of available resources? What can we gain that we don’t have now? — and his answers lead to discussions of what social forces can carry through the necessary changes.

He devotes three chapters to an issue I haven’t seen addressed in depth elsewhere, the approach an ecosocialist society should take towards the development and deployment of new technologies. He argues that the key issue is not technology as such, but the criteria used to decide what should be used.

“The distinctive contribution of socialism lies not in any particular inventions that might emerge but rather in the reorganization of society in such a way that technological choices are no longer made … on the basis of marketability and profit-potential, but rather on the basis of compatibility with the overall requirements of humanity and the natural world. The process of identifying those requirements will of course be a matter for debate, but the guiding principles for any decisions will be, on the one hand, the concern for long-term species-survival, and on the other, the assumption that no portion of the human race is entitled to deny any other portion of it, on any pretext, the conditions for a decent life. ”

But the book’s principal focus is on the need to move from theory and criticism to movement building. As he writes, there is a “clear theoretical symbiosis between ecological thinking and the anti-capitalist critique.”

“Two major strands of radical activism are thereby poised to function as one, in the sense that the ecological movement, in seeking to override market dictates, is at its core anti-capitalist, while the critique of capitalism is, in its rejection of the growth/accumulation imperative, inherently ecological. … Yet there remain huge obstacles to popular recognition of the link between ecology and socialism, and hence to popular support for an agenda of collectively planned, society-wide reduction in energy-use.”

A key task before ecosocialists is to determine what those obstacles are, and how can they be overcome. While recognizing the importance of movements that address specific issues, we must be clear that the ecological crisis is a class issue that can only be resolved by building “a comprehensive movement bringing together all the oppressed constituencies” to confront the capitalist system and the class that dominates it.

“The convergence of popular interests is accelerated by the environmental crisis. The assault of capital on the ecosphere feeds on the same culture of domination that drives the multiple oppressions we have discussed. Looming ecological collapse underlines the urgency of uniting the overwhelming majority of people to reshape their interactions both among themselves and with the natural world. But this cannot be done without, in the process, addressing the formidable obstacle to such steps posed by the power of capital.”

Red-Green Revolution is clearly written and focused, but far from dry: it is a passionate call to organize and act. Victor Wallis puts the need to building mass movement to end capitalist ecocide at the top of ecosocialist agenda, where it surely belongs. His book is essential reading for everyone who agrees with that goal.