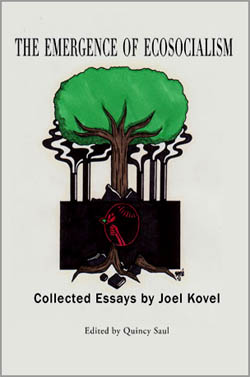 Mike Shaughnessy is a member of Green Left, the ecosocialist current in the Green Party of England and Wales.

I have recently been reading The Emergence of Ecosocialism, a collection of essays written by the now sadly departed Joel Kovel. Edited by Quincy Saul, and published in 2018, the essays have all been published previously, albeit in subscription journals, mainly Capitalism Nature Socialism, which Kovel edited. One of the main themes that runs through much of the collection is for the need for green politics to fully embrace ecosocialism as its central philosophy, if it is to be effective in tackling the ecological crisis.

In Kovel’s essay ‘Ecological Marxism and Dialectic,’ first published in 1995, he begins by lamenting:

“Marxism as it now commonly constituted appears as a stranger in ecological circles. This is not as it should be, but is a fact. It is a disastrous fact, if only because this keeps green movements from understanding the cause of ecocatastrophe, but it is fact nevertheless. I do not think the estrangement can be mended absent a major critique of current green and ecological thought for residual anti-communism, tendencies towards mystification, general social obtuseness, and latent reactionary potential. However, it is no less essential to criticize Marxism for its role in perpetuating the divide.”

Having been a member of the Green party of England and Wales for almost fifteen years now, I can certainly confirm that greens all too often put individual ‘lifestyle’ actions, such as having a vegan diet or using and promoting renewable energy sources to the fore, whilst believing that our economic system, capitalism, can be made ecologically rational. There is nothing wrong with ‘doing the right thing’ in our individual lives, but in terms of making a significant difference to the ecological crisis, it has a very limited effect.

As for greening capitalism, the impact could be greater here, but will ultimately fail because of the nature of capitalism. It is a hopeless endeavor, and I think, the idea that this is possible, displays a lack of knowledge of political economy. For capitalism to thrive, even to survive, it needs to generate endless economic growth, or else is thrown into a crisis of recession or depression. Periodically capitalism does go into recession, caused by the system’s tendency to over produce, causing a collapse in the price of goods and reduced spending power (income) for consumers (unemployment).

To resolve these crises, the system needs to grow its way out, and it always has done so far, but at a cost to the environment through more exploitation of the planet’s resources and often accompanied by cuts to employee protection laws for workers. Once growth returns so too does the harm inflicted on the environment, until the next crisis. But logic informs us that this cannot go on forever, resources are finite, and will be exhausted at some stage.

Making matters worse, this growth is generated by burning extra fossil fuels, releasing carbon into the atmosphere, and so increasing dangerous climate change.

Renewable energy will not provide enough power for the ever hungry system. Even though renewable energy production has risen over recent years, so has the extraction and use of fossil fuels increased. This in a period when economic growth has been pretty sluggish by historical standards. Green capitalism is a fantasy.

Kovel is right to apportion some of the blame to traditional socialism for largely ignoring ecological politics in its critique of capitalism. Marx himself didn’t really fully incorporate ecological concerns in his writing, but there is some evidence that he may have developed this more fully had he lived longer.

In another one of his essays, “On Marx and Ecology,” written for a speech in 2010, to a conference Marxism and Ecological Civilization in Shanghai, Kovel says:

“My thesis is that an appropriation of Karl Marx in relation to ecology is necessary-though not sufficient- for this project. Marx of course never used the term, ecological crisis. The word ecology had just come into existence during his later years, and the generalized ruin of nature was not a looming threat. Nevertheless, in contrast to received opinion, Marx thought and cared deeply about nature and wrote brilliantly about many ecological problems, especially those relating to agriculture and the soil.

“Further, Marx identified the dynamic responsible for the ecological crisis, although he did not do so directly, or all in the same place. In one of his earlier studies, ‘On the Jewish Question,’ Marx writes:

“’The mode of perceiving nature, under the rule of private property and money is a real contempt for, and practical degradation of, nature….It is in this sense that [in a 1524 pamphlet] Thomas Munzer declares it intolerable ‘that every creature should be transformed into property- the fishes in the water, the birds of the air, the plants on the earth: the creature too should become free.’”

Kovel goes on to suggest that Marx makes it clear that capital’s dominion has one overriding priority: its own accumulation prevails over all other goals and values “sacrificing nature and humanity to the gods of profit. Quantity rules over quality; and exchange value displaces use value.”

Kovel says, to restore use value to its rightful importance, labor should be freely associated, meaning that capital’s need to turn use-value into exchange value, and the accompanying need for ever increasing accumulation, will only be avoided by the removal of capital from our productive processes. Only then, socialism, what we call ecosocialism, will be able to replace this ecologically destructive capitalist system, with an ecocentric, ecologically rational economic system. Otherwise, we risk ecocatastrophe and possible extinction as a species.

To coin a phrase from capital’s great champion, former UK prime minister Margaret Thatcher, “there is no alternative.”