To fully appreciate the challenges we face in transforming our food system we need to explore the economic and political context in which food is grown, sold and consumed in the world today 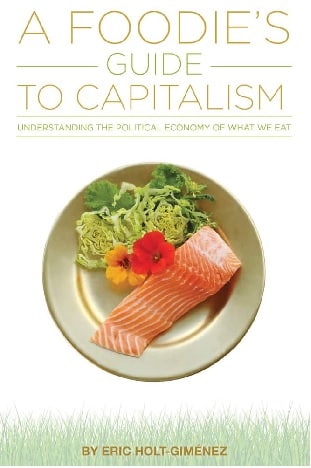 To fully appreciate the challenges we face in transforming our food system we need to explore the economic and political context in which food is grown, sold and consumed in the world today

Reprinted, with permission, from the Introduction to A Foodie’s Guide to Capitalism: Understanding the Political Economy of What We Eat (Monthly Review Press, 2017).

The author, Eric Holt-Giménez, is Director of the Institute for Food and Development Policy, better known as Food First, a “people’s think tank” dedicated to ending the injustices that cause hunger.

Does the food movement need to understand capitalism?

The answer of course is yes. Everyone trying to change the food system — people fighting to end hunger, food insecurity, and diet-related diseases, as well as those working for equitable and sustainable agriculture and people who simply want access to good, healthy food — needs to know about capitalism. Why? Because we have a capitalist food system. And yet, relatively few people recognize this.

This seems odd, particularly for those who identify with the food movement. After all, one wouldn’t start farming without some notion of growing plants, or build a website without knowledge of web software, or roof a house without understanding construction. Yet many, if not most, food activists trying to change the food system have scant knowledge of its capitalist foundations.

In part, this is because most people in the food movement are too busy trying to deal with the immediate problems of the food system. Understandably, they concentrate their efforts on one or two issues rather than the system as a whole, such as healthy food access, urban agriculture, organic farming, community-supported agriculture, local food, farmworkers’ rights, animal welfare, pesticide contamination, seed sovereignty, GMO labeling…the list is long. These projects are often funded by philanthropic foundations favoring projects that address urgent problems and organizations that can demonstrate tangible, quantifiable results.

Given the severity of the problems in our food system, this is understandable, but this focus often eclipses work to build longer-term political movements that could address the root causes of those problems. What’s more, organizations often find themselves in competition for funding, making it difficult to forge diverse, cross-issue alliances dedicated to systemic change. Intrepid individuals and food entrepreneurs working on their own in specialized market niches are even less likely to address systemic issues.

But there are also larger political and ideological reasons why the food movement does not know much about capitalism. For the most part, capitalism is simply not discussed in capitalist countries — not even in university economics courses — where political-economic structures are assumed to be immutable and are rarely questioned. Until the global financial crash in 2008, it was socially awkward to mention the term capitalism in the United States. This is because even a perfunctory examination of capitalism immediately uncovers profound economic and political disparities, thus contradicting the commonly held notion that we live in a classless, democratic society.

Those privileged enough to go to college usually need to wait until graduate school before delving into the foundational works of Ricardo, Smith, Mill, Marx, Polanyi, Keynes, and other notable scholars of our economic system. Even then, capitalism is often treated as an intellectual artifact to be studied in academic isolation rather than the dynamic social and economic system of wealth and power that constantly influences, shapes, and reshapes life around the globe.

Directed primarily (though not exclusively) to a U.S. audience, this book takes another approach. It applies a food system framework to explain some of the basic workings of capitalism, and uses a basic understanding of capitalism to understand why the food system works as it does. In the course of this analysis, social movements are discussed, showing the ways in which class interests, social perceptions, and political organization can affect outcomes in a capitalist food regime. If you are unfamiliar with this approach to understanding the world, don’t be surprised. You’re not alone.

In the late 1970s the United States and Great Britain introduced policies to lower taxes on corporations and the wealthy, privatize public goods, remove environmental and labor regulations, and liberalize trade. These polices encouraged the rule of what mainstream economists like to call the “free market,” that is, the freedom for huge corporations to produce what and where they want, import from where they want, and stash profits where they want, all the while evading tax obligations and transferring huge environmental and health costs to society. This suite of economic policies became known as “neoliberalism” because they revived nineteenth century ideas of free markets in a twentieth century context — to the benefit of the very wealthy.

Neoliberalism did more than create a new plutocracy of billionaires and the highest levels of wealth and income disparity in history. In the face of privatization and capital’s growing monopoly power, the public sphere — that part of society where decisions are made by citizens engaged in political discussion and civic activity (rather than the market) and where public goods are shared — disintegrated. Unions were crippled, and the political influence of progressive organizations crumbled, frequently under the direct attack of well-funded reactionary forces. Although these developments are often presented as part of the “natural” evolution of the global economy, they were all based on decisions made by powerful wealthy classes to advance their own interests.

Neoliberalism on a global scale became known as globalization, a class project advanced by the powerful owners of international capital we now call the 0.01%. Neoliberalism reinforces the notion that we are, each of us, completely responsible for whatever life outcomes we have experienced. It aims to make us as vulnerable as possible, and hence more easily exploited.

At the same time, new social movements based on gender, race, ethnicity, and environment have been growing since the 1960s. Highly fragmented, these movements tended to turn away from older forms of political organizing like unions, vanguard political parties, and politico-military organizations, which were often viewed as undemocratic and unresponsive to the politics of identity and to environmental issues. As neoliberalism gained momentum, the established organizations of the “old left” became increasingly ineffective, while established political parties, like the Republicans and the Democrats in the United States, moved steadily to the right, embracing the new model.

The combination of globalization, the demise of the old left, and the spread of new social movements broke down a lot of encrusted political orthodoxy, opening the left to issues of gender, environment, ethnicity, and race. But in affluent countries, this also produced a generation of somewhat class-blind activists with little interest in how the economic system actually works, and little understanding of the role of capitalism in the social oppressions they were fighting.

Critical knowledge of capitalism — vital to the struggles of social movements through the nineteenth and twentieth centuries — largely disappeared from the lexicon of social change, precisely at a time when neoliberal capitalism was destroying the working class and relentlessly penetrating every aspect of nature and society on the planet. Many social progressives became unwitting accomplices to the rise of economic neoliberalism, giving rise to what Nancy Fraser calls “progressive neoliberalism”:

“Throughout the years when manufacturing cratered, the country buzzed with talk of “diversity,” “empowerment,” and “non-discrimination.” Identifying “progress” with meritocracy instead of equality, these terms equated “emancipation” with the rise of a small elite of “talented” women, minorities, and gays in the winner-takes-all corporate hierarchy instead of with the latter’s abolition. These liberal-individualist understandings of “progress” gradually replaced the more expansive, anti-hierarchical, egalitarian, class-sensitive, anti-capitalist understandings of emancipation that had flourished in the 1960s and 1970s.”

The fragmentation, depolitization, and neoliberal co-optation of the food movement, however, is rapidly changing with the crumbling of progressive neoliberalism. The rise of racial intolerance, xenophobia, and organized violence from the far-right has raised concerns of neofascism, worldwide, and prompted all progressive social movements to dig deeper to fully understand the problems they confront.

Many people in the Global South, especially poor food producers, can’t afford not to understand the economic forces destroying their livelihoods. The rise of today’s international food sovereignty movement, which has also taken root among farmers, farmworkers, and foodworkers in the United States, is part of a long history of resistance to violent, capitalist dispossession and exploitation of land, water, markets, labor, and seeds.

In the Global North, underserved communities of color —  historically subjected to waves of colonization, dispossession, exploitation, and discrimination — form the backbone of a food justice movement calling for fair and equitable access to good, healthy food.

Understanding why people of color are twice as likely to suffer from food insecurity and diet-related disease, even though they live in affluent Northern democracies, requires an understanding of the intersection of capitalism and racism. So does understanding why farmers go broke overproducing food in a world where one in seven people are going hungry.

As the middle class in the developed world shrinks, much of the millennial generation, underemployed and saddled with debt, will live shorter lives than their parents, due in large part to the epidemic of diet-related diseases endemic to modern capitalism. The widespread “back to the land” trend is not simply a lifestyle choice, it also responds to shrinking livelihood opportunities.

And as young farmers struggle to access ever-more expensive farmland, the public runs up against corporate intransigence to everything from oil pipelines and GMO labeling to food borne illnesses and unhealthy school food. Environmentalists wage endless battles against industrial agriculture’s water depletion, pollution, and inhumane treatment of animals, biodiversity loss, and carbon emissions. There is a growing desire to understand the root causes of these related and seemingly intractable problems.

Activists across the food movement are beginning to realize that the food system cannot be changed in isolation from the larger economic system. Sure, we can tinker around the edges of the issue and do useful work in the process. However, to fully appreciate the magnitude of the challenges we face in transforming our food system and what will be needed to bring about a new one in harmony with people’s needs and the environment, we need to explore the economic and political context of our food system — that is, capitalist society.

This book is intended as apolitical-economic tool kit for the food movement — from farmers, food and farm justice activists, and concerned consumers to climate justice and environmental activists. It is a basic introduction to the economic system of capitalism as seen through the lens of the food system, though it’s not meant to be an exhaustive treatment of either. By understanding some of the rudiments of how capitalism operates, we can better grasp why our food system is the way it is, and how we can change it.

Conversely, understanding how capitalism shapes the food system can help us understand the role food plays in the structure and function of capitalism itself.

These kinds of insights can help us put our different forms of activism into political perspective and recognize opportunities for building alternatives, forging alliances, taking action, and comprehending the difference between superficial and truly transformative reforms.