A Brazilian city’s food program feeds the hungry and supports local farmers. It succeeds by empowering communities and challenging inequality. 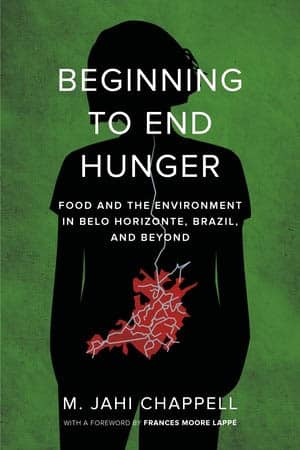 A Brazilian city’s food program feeds the hungry and supports local farmers. It succeeds by empowering communities and challenging inequality.

M. Jahi Chappell
BEGINNING TO END HUNGER
Food and the Environment in Belo Horizonte, Brazil, and Beyond
University of California Press, 2018

Hunger is a real crisis for millions of people around the globe. Officially, about 11 percent of the world’s population are acknowledged to be malnourished today, but some studies suggest the figure is more than twice that. Also, as M. Jahi Chappell points out, 1 to 2 billion people suffer from “hidden hunger” — insufficient  nutrients in their diet. At the same time 600 million people suffer from obesity.

These figures represent an obscenity: the madness of a food system structured around maximizing profit, while exacerbating hunger and malnutrition. The system also ensures that in the global south and the richer north, farmers, peasants and agricultural producers increasingly face crippling debts, poverty incomes and the pressure of big business, which devalues their crops and boosts incomes for supermarket chains and multinational agribusiness.

It is tempting for socialists to argue simply that the problem is capitalism and that only a socialist, post-capitalist world can feed the world’s population healthily and sustainably. M. Jahi Chappell’s important study shows that this is wrong. It is possible to build a more equitable and sustainable food system today at the same time as strengthening the struggle against capitalism. Chappell illustrates this with a detailed study of the experience of Belo Horizonte (BH), the sixth largest city in Brazil, home to about two and a half million people.

In 1993, in response to a major problem of hunger and malnutrition in the city, Belo Horizonte began a programme designed to improve food sovereignty, based on the concept of “Five A’s” — availability, accessibility, adequacy, acceptability and agency. As Chappell summarizes, the programme “focused particularly on accessibility, avoiding the historical overemphasis on availability and production.” For Chappell, this approach distinguishes BH’s approach from more traditional approaches to hunger. As he argues, “concentrating on how much food is being produced and how we can produce more is in most cases the wrong focus entirely.” Chappell shows that the problem with food production under capitalism remains one linked to poverty and lack of agency on the part of ordinary people, rather than lack of food.

BH’s government founded the Municipal Under-Secretariat of Food and Nutritional Security (SMASAN), which has been remarkably successful. Chappell gives us a few examples:

There are two key strands to the programme’s success. The first is targeted direction of resources. For instance, one of the most visible and popular aspects to the city’s food strategy is the “Popular Restaurant” program. Today between 12,000 and 14,000 people are able to eat a healthy meal at a low price. Food is prepared from fresh ingredients and “co-planned by local chefs and nutritionists,” producing 1,000 to 1,200 calorie lunches. Popular Restaurants have been carefully thought through to “pair adequacy and acceptability with accessibility.” For example, the city prides itself on offering real cutlery in order to improve dignity.

A second strand is empowerment of producers and consumers. Support for urban agriculture and for producers in the surrounding rural areas have increased the availability of fresh, healthy food and because where a direct relationship with farmers has been created, middlemen have been cut out, improving farm income and reducing the price of food in the city. Because some farmers have developed close working links with the city, they have been able to benefit from advice about farming methods which has improved biodiversity and reduced the use of chemical pesticides. Unfortunately these programs are inadequate and often under-funded.

These are real successes, but Chappell acknowledges that they aren’t enough.

“The city’s efforts in this area were minor in comparison to the size of the local farm population and the challenges facing them… It is an ongoing weakness for … SMASAN that production methods and prices for farmers receive only irregular and secondary concern. Even as its multifaceted approach is a strength, it is clear that some facets require increased attention, if SMASAN is to continue its progress in BH.”

Despite its limitations, BH’s strategy has dramatically improved the availability of good, low-priced food in a way that improves the lives of the producers growing the crops. Chappell argues that this approach can lead to further changes, “each small step potentially represents the liberation of millions from hunger, and an increase in their, and our, ability to work together to scale the final hills.”

SMASAN started because sympathetic senior figures in the BH government agreed with a vision based on the Five A’s to tackle food inequality. Today the Brazilian national government’s austerity program is undermining this approach. Changing local politics mean that BH politicians have “moved on” from food security so there is much less understanding of historic successes or clarity on future direction.

The academic focus of the book means that Chappell is very concerned with mechanisms by which policies have come about and I would have liked more contributions from those who work in and are affected by SMASAN’s programmes. The few that are included provide fascinating insights into how empowering people can improve food sovereignty. I would also have liked more information on the social movements that helped create SMASAN and the interaction between government institutions and similar movements today.

SMASAN’s success, even in the face of national policies that undermine it and the reality of the capitalist food industry show that reforms focussed on empowering communities and challenging inequality can make a real difference.

Chappell understands that this doesn’t fix the problem. A focus by SMASAN on small farmers is good in a country where land ownership is dominated by the wealthy — the top 2 percent own 55.5 percent of agricultural land. But for a lasting transformation of the food system those inequalities will have to end. While BH shows we can feed the world, it also helps us understand that we will need more than just local reforms of the food system if we are to create a food system that’s for people and planet.

Martin Empson is the author of Land and Labour: Marxism, ecology and human history and Kill All the Gentlemen: Class struggle and change in the English countryside