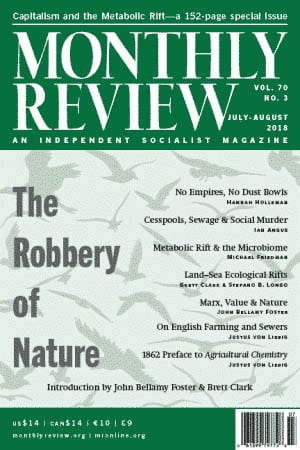 If you have been waiting for the perfect time to subscribe to Monthly Review, wait no longer. The latest issue of my favorite Marxist journal is a special double issue devoted to explaining and expanding the ecological critique embodied in Marx’s theory of metabolic rift.

Each article uses the metabolic rift perspective to uncover core contradictions of capitalism, as well as possible paths toward a new system that will meet human needs while protecting the earth and future generations. (Full disclosure: I am one of the authors.)

Good news: The articles will be posted online over the next two months — the online availability dates are shown below.

Even better news: If you subscribe to MR, you can read the entire issue online, right now, before your paper copy arrives!

Which is a very good reason to subscribe now.

Here’s what you’ll read in the July-August 2018 issue of Monthly Review:

John Bellamy Foster & Brett Clark
THE ROBBERY OF NATURE
Capitalism and the Metabolic Rift
(Available online now)
Marx’s notion of “the robbery of the soil” is intrinsically connected to the rift in the metabolism between human beings and the earth. To get at the complexities of his metabolic rift theory, it is useful to look separately at the issues of the robbery and the rift, seen as separate moments in a single development.

Hannah Holleman
NO EMPIRES, NO DUST BOWLS
Ecological Disasters and the Lessons of History
(Available online July 9)
When scientists describe the increase of Dust Bowl-like conditions under climate change, they signal a particular kind of violent ecological and social change. But equally violent are the social forces, historical developments, policies, and practices that produce such massive socioecological crises in the first place.

Ian Angus
CESSPOOLS, SEWAGE, AND SOCIAL MURDER
Environmental Crisis and Metabolic Rift in Nineteenth-Century London
(Available online July 16)
The accumulation of human excrement in nineteenth-century cities, particularly London, precipitated a historic environmental crisis—an aspect of the metabolic rift mostly overlooked in ecosocialist analysis. The solution that was finally adopted only shifted the problem out of sight, setting the stage for even greater crises in our time.

Michael Friedman
METABOLIC RIFT AND THE HUMAN MICROBIOME
(Available online July 23)
Metabolic rift theory can deepen our understanding of the human microbiota—organisms living on and inside of humans—and the ways that capitalism has disrupted these microbial ecosystems, with serious consequences for our health.

Brett Clark & Stefano B. Longo
LAND–SEA ECOLOGICAL RIFTS
A Metabolic Analysis of Nutrient Loading
(Available online July 30)
Increasing rates of nitrogen and phosphorus application have caused severe damage to aquatic systems, as rivers, streams, lakes, bays, and ocean systems have been inundated with nutrient runoff. Only by addressing the metabolic rupture in the soil nutrient cycle and the contradictions of capital can we begin to mend these land–sea rifts.

John Bellamy Foster
MARX, VALUE, AND NATURE
(Available online August 13)
In recent years ecological critiques of capitalism have deepened and multiplied, resulting in new debates over the conception, scope, and purpose of Marx’s value theory and its relation to the natural world.

PLUS: Two previously unavailable documents by Justus von Liebig, the agricultural chemist whose work inspired and informed Marx’s theory of metabolic rift
1859: ON ENGLISH FARMING AND SEWERS
(Available online August 20)
“If the British people do not take the pains to secure the natural conditions of the permanent fertility of their land, if they allow these conditions as hitherto to be squandered, their fields will at no distant day cease to yield their returns of corn and meat.”
1862: PREFACE TO THE AGRICULTURAL CHEMISTRY
(Available online August 27)
“I have had abundant opportunity of estimating the impediments which stand in the way of scientific doctrines passing into the domain of practical Agriculture. The reason of which is, especially, that no connexion was formed between Practice and Science.”