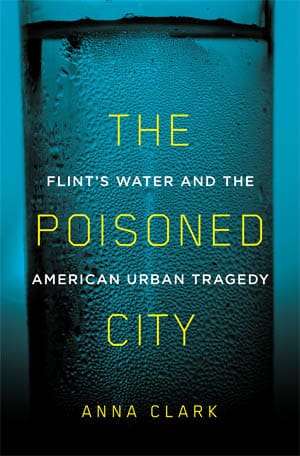 Detroit journalist Anna Clark comes honestly to documenting resistance by ordinary people to injustice. Her great-grandfather was one of the strikers in Flint’s General Motors factory occupation of 1936-37, which played a pivotal role in strengthening the United Auto Workers union. So her interest in the water crisis in Flint Michigan, whose ill effects began appearing in 2014, is a natural fit.

Clark conducted extensive reviews of media coverage but also relied heavily on hundreds of hours of interviews with affected Flint residents, their medical and scientific allies, as well as with government officials who contributed to the crisis. She has written a fascinating, easy to read history of the water crisis, its causes, its effects and the indomitable fighting spirit of Flint residents.

One of the most valuable contributions Clark makes to the discussion of the Flint water crisis is to emphasize its history in racism and economic crises. Flint’s economy benefited from the Great Migration of African-Americans from the southern U.S. to the north. Clark notes, “In 1919, the year that GM (General Motors) produced its millionth car, GM created the Modern Housing Corporation to entice new workers… GM eventually constructed three thousand homes…offered to workers on friendly terms”.

Nevertheless, segregation was the rule not only for GM and private realtors but also the federal government’s public housing. Being segregated into crowded, often polluted neighborhoods helped fuel the anger that exploded in the uprisings by blacks in 1967 in Flint and in cities across the US, forcing the city to pass the country’s first fair housing ordinance.

Today 57% of the population is black and the locations of black neighbourhoods made them most vulnerable in the water crisis.

Black resistance to racism rose alongside worker resistance to the greed of Flint’s auto bosses. The best-known case was the 1936-37 workers’ strike, better known as the sit-down strike, where 2,000 workers occupied three General Motors factories. After a long battle, the workers won their demands and, more importantly, strengthened the United Automobile Workers, and other unions for decades to come, until the McCarthy period in the 1950s initiated the anti-union witch-hunts and legislation that persist to this day.

This history of both anti-racist and workers’ struggles set the stage for the community’s fight for justice when the water crisis hit.

So much, so wrong

As Steve Dandereau’s book A Town Abandoned demonstrates, Flint was part of the deindustrialization that affected manufacturing towns all over the U.S., which accelerated after the year 2000. In 1978, GM employed 80,000 people but by 2006 that had fallen to 8,000.

Lower tax revenues to the city led to deficits, so the state enforced non-elected “Emergency management” on the city in 2002-2004, again in 2011.

As a cost-saving measure the Emergency Manager decided to switch the source of Flint’s water from the Detroit system (Lake Huron and Detroit River water) to a new, yet-to-be-built system (Karegnondi Water Authority) and in the meantime use Flint River water. Flint “flipped the switch” in April 2014. Flint’s treatment plant failed to use the corrosion control needed to address the unique aspects of the Flint river water. This broke federal laws like the Clean Water Act and the Safe Drinking Water Act, and bans on lead pipes.

Complaints of skin rash, hair falling out and compromised immune systems began almost immediately. Most came from Black neighbourhoods, because the water had to travel farther to reach them increasing exposure to the lead pipes. Within 4 months, the first of several boil-advisory notices was issued. People had to buy bottled water for everything or face the health consequences. Lead poisoning was identified as the cause, with tests showing levels of 104 parts per billion in the home of LeeAnne Walters, well above the federal “action level” for 15ppb.

Meanwhile GM said the water was corroding engine parts, so it switched back to Detroit water. This is a painful example of the rich buying their way out of a problem while the poor suffer. As one UAW member asked, “If it’s too corrosive for an engine, what’s it doing to the inside of a person?”

Legionnaire’s disease, linked to lead poisoning, killed 12 people and affected several dozen more. Up to 12,000 children were exposed to lead in the water; children are especially vulnerable to lead’s ill effects on the brain and it will be years before the full impact is known.

Because the pipes have not been fully replaced, and may not be until 2020, residents must still use bottled or filtered water.

The government’s irresponsibility in all of this is staggering. After the autumn 2014 boil-water advisories, residents learned that there were high levels of Total Trihalomethanes (TTHMs), a carcinogenic by-product of disinfection, but the Emergency Manager refused to return to the Detroit water system, as usual citing costs.

The state Department of Environmental Quality stated falsely in February 2015 that Flint was using corrosion control, and in July stated that “anyone who is concerned about lead in the drinking water in Flint can relax.” As testing for lead continued, the state disputed the results. The Centre for Disease Control also contested early lead readings.

This continued a long history of private sector profiteers who hired “scientists” to deny the ill effects of lead for decades, fighting every attempt at legislation. This included Charles Kettering who was GM’s head of research from 1920-1947, revered by many as a great inventor!

Not until October 2015, was the state governor forced to reconnect Flint to Detroit water. By December the Mayor declared a State of Emergency, and a state task force blamed the Department of Environmental Quality as mainly responsible for the catastrophe.

As soon as the ill effects of the water became evident, residents began organizing. Hundreds were meeting by January 2015. The various strands of opposition were coordinated into the Coalition for Clean Water. The exposure to lead and TTHMs happened as residents paid some of the highest water rates in the world.

In a chapter wonderfully titled “Citizen/Science” Clark reviews how residents attracted allies who could provide the scientific data to explain the illnesses so many experienced. LeeAnne Walters went “over the head” of the Department of Environmental Quality to reach a regulations manager in the department’s Drinking Water Division, Miguel Del Toral. He teamed with Marc Edwards, an environmental engineering professor, who had exposed the lead water crisis in Washington DC in 2001-2003, another catastrophe ignored by the Centre for Disease Control. They worked with others and trained citizens to test the water.

By June and September 2015 they showed that earlier city tests were improperly conducted and that there was widespread lead contamination, findings that were disputed by the state. The residents never stopped fighting. And as result of a class action lawsuit the state must now pay $87 million to replace 18,000 lead and steel water lines with copper ones, at no cost to homeowners. Clark quotes one resident: “Flint proved that even while poisoned … we are not just victims. We are fighters.”

Could it happen again? What are the alternatives?

Water crises have hit other cities in North America, killing people in the name of saving money or “fiscal responsibility.” As neoliberal governments everywhere impose austerity agendas, cities are left with few resources to fix aging infrastructure. And as Clark notes, “The more that cities are divided by race and class, the more that environmental racism becomes likely.”

She argues, “Agencies charged with protecting public health and natural resources deserve to be well-funded, pro-active, and oriented solely toward serving the public interest.” As others have said, we need “people before profits.” This will need broad-based movements, organized to take on the conservatives at various levels of government who are hell-bent on “finding efficiencies,” while ignoring the ravages of global warming that make clean water an increasingly rare resource.

A summary chronology would have improved this book, but overall, it is a powerful account of how working people and grass-roots organizing can fight austerity regimes. I recommend it.