Three novels by Kim Stanley Robinson: Aurora is monumental and Shaman is a great evocation of the past, but New York 2140 understates both the climate crisis and the solutions needed 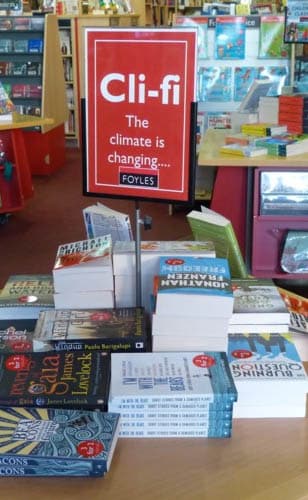 Three novels by Kim Stanley Robinson: Aurora is monumental and Shaman is a great evocation of the past, but New York 2140 understates both the climate crisis and the solutions needed

Martin Empson is the author of Land and Labour: Marxism, Ecology and Human History. These reviews were first published in his blog, Resolute Reader.

One of the surprising things I found while reading Aurora, is that all the reviews I had read managed to not give away the central plot twist to the whole novel. So I will endeavor to do exactly the same in this brief review, limiting my comments to mostly arguing that this is an excellent novel which is somewhat of a return to form for Kim Stanley Robinson’s science fiction after the disappointing and confusing 2312.

Science fiction traditionally overcomes the inherent boredom of long distance space travel by inventing faster-than-light technologies. These “warp-drives” enable space-exploration, colonisation and warfare to become simply galactic expansions of what humans did on the Earth. The reality would, as Robinson points out, be much more mundane. Slow, dangerous, complex and technologically challenging travel that requires decades of time to get anywhere. Robinson doesn’t just point this out, he makes a novel out of it. His spaceship, on the way to a moon around a planet around the star Tau Ceti is a gradually failing technological marvel. Bits are breaking off, the lights are failing, there’s poison in the soil because the designers didn’t anticipate the nuances of closed system agriculture and there’s population pressure. It’s a race against time for the colonists, descended from the original settlers, to make it to their new home.

Again, ignoring the central plot twist….. *whistles*…. there some really clever themes running through this book. Partly it is an ecological novel. KSR gives away some of his thinking on this early on when he uses the phrase “metabolic rift” a key concept in Marxist ecological studies. His spaceship as a closed system, where natural processes gradually overcome technology’s ability to cope, is a clever, if obvious, commentary on our own planetary emergency. Secondly I liked the way that political discussion, political parties and argument were central to the process of decision making. Even if, at times, that descended a little into crude stereotypes.

This is a monumental novel. Some science-fiction fans have felt disappointed by what they see as a pessimistic approach to humanity’s ability to colonise the galaxy. But they’re missing a wider point that KSR is making — this is not a novel about the far future, but one about today.

I read this new novel simultaneously with a book by Francis Pryor on the archaeological excavations of a bronze age site in England called Flag Fen. I was struck by a passage in that book where Pryor cautions on the dangers of projecting our own experience of society onto peoples in the distance past who would have had an extremely different understanding of the world, history and religion. Pryor wrote

we must beware of assuming that they must always have acted like us, only more ancient. 2,500 years is a very long time indeed, and I suspect we would find life in the Iron Age far stranger than just living in a round-house and eating off coarse pottery. I am convinced we would find that their whole system of beliefs, standards and values was based on a view of history that was entirely alien to us.

There is a danger then, for novelists writing about the distance past, or societies that are very different to modern capitalism that they simply recreate a version of the 21st century in the past. I am extremely happy to say that I think that Kim Stanley Robinson doesn’t fall into this trap with his wonderful novel Shaman which explores the world of hunter-gatherers 25,000 years ago.

Robinson doesn’t just evoke a world that seems real, he tries to portray it through the eyes of a hunter-gatherer, Loon, who is being trained as a Shaman. Loon understands the world from the magic he knows about, the stories he has been told and the way that he and his tribe are part of nature. Robinson has clearly studied hunter-gatherers extensively. So he describes how the tribes have deep and constantly developing knowledge of flora and fauna. How they live is far from ignorant, violent or savage and much their collective survival is the act of the collective. That’s not to say that individual “leaders” don’t exist, but in Robinson’s imagining (and backed up by various real world studies) these leaders are part of a wider collective. No one in Loon’s group (just as among real world hunter-gatherers) would blindly follow dangerous suggestions from their head-man. I say head-man here, even though the tribe described often consider the women to be the most important part of the group.

At the heart of this novel is a short story where Loon and others have to rescue Loon’s wife from another tribe who uses them as slaves. I actually found this the least interesting and entertaining part of the book. It felt contrived and bolted on. Far from the really fascinating story of how hunter-gatherers survived, understood their world and changed it. Those who have seen the wonderful film Cave of Forgotten Dreams will recognise that some of Shaman is set within and around its location. Robinson beautifully characterises the way the paintings on the wall of that cave come to life, and seem to be real to the artist, at the same time as being part of another spirit world.

This is a great evocation of the past. Whether it is completely accurate we’ll never know. But because it is based on real anthropology it is as far from the Flintstones as a fictional depiction of the past can be. It also helps that Kim Stanley Robinson is a cracking writer. Read it.

What will life be like for people when global warming has melted the ice caps and climate change has transformed the world’s environment? The vast majority of scientists conclude that the temperature rises we can expect by the end of the current century will mean a colossal human catastrophe, unless there we radically reduce the amount of carbon emissions. These changes will mean disaster for millions of people with water shortages, heat waves, flooding, extreme weather and famine following. Millions of people will suffer and there will be a corresponding catastrophe for the Earth’s flora and fauna.

Runway climate change – the result of global warming causing processes that feedback and lead to more global warming – could, in some scenarios lead to levels of warming that make Earth uninhabitable for humans. But before that takes place, there will be millions of people living, and struggling, on a hotter world.

This then is the premise for Kim Stanley Robinson’s latest novel. He focuses on the city of New York after two major “pulse” events have led to significant sea level rises that have destroyed much of the world’s coast lines and turned cities like New York into collections of island skyscrapers. People have learned to adapt — to seal the basement floors and build farms on the top of the towers. Many of the towers in Robinson’s New York of 2140 are run by a sort of collective democratic leadership.

Capitalism still exists, and Robinson brilliantly shows how the system adapts to these changes. New financial markets are opened up with wealthy speculators betting on the way that water levels change the value of the markets. Robinson uses much of this to discuss the way that capitalism leads to economic and environmental crisis, and how governments are prepared to let ordinary people suffer in order to bail out the banks and the system.

The story follows a group of people living the Met tower — a couple of computer experts who have tried to hack the financial system to bring capitalism down, a policewoman who is trying to find out who kidnapped them, a financial speculator who is obsessed with new ways of making himself rich in the era of high water levels and various other characters including a couple of kids who find treasure worth billions. One rather lovable chatterer is Amelia who pilots a blimp and has an enormous “cloud following” of viewers who watch her nature films. These characters all gradually come to the conclusion that the system is broken and is heading for a major economic crash, and the time is right to change things.

Reading this as an environmental activist and a Marxist I had three problems with the book. At this point I should emphasise that Kim Stanley Robinson is one of my favourite authors, but there are major problems with this novel. Firstly the world he depicts, post climate disaster, is simply too good. This is basically early 21st century capitalism with higher sea levels and no ice-caps. You don’t get any sense of how the warming that has lead to the pulse events has impacted the rest of the world. Even the stories of the Netherlands being destroyed and replaced by a floating city state seem to imply that everything is OK really. The refugees who make it to the Met come across as slightly lost migrants, rather than people who have seen their entire world collapse. In fact we hear next to nothing about what is taking place in the rest of the world. Surely there are wars, famines and disasters?

In other words, Robinson’s future is too nice. There’s no real sense that global warming has led to phase shift of the planet’s ecological system. Things are just a little bit worse than they were. It’s not a scientifically accurate picture of what could happen and it downplays the crisis we are in the midst of. In addition, Robinson’s belief that technology is the solution seems naive too. New York 2140 is extremely high-tech, the environmental disaster having apparently spurred innovation to solve the problems of the world.

Secondly the economics just don’t work. While reading this I was suddenly struck by the idea that this was actually not a revolutionary work (despite the mass involvement of ordinary people in a capital “strike” that puts the economy into crisis). It’s a book about how Keynesian economics must replace neo-liberalism if we’re to have social and ecological justice. The big, radical idea at the heart of the book is to nationalize the banks. It’s inadequate in the context of Robinson’s world and it’s not enough if we want to really challenge real-world capitalism.

The final problem I had is that the story doesn’t go anywhere. There are some brilliant bits — a very well described riot in the aftermath of a huge storm, and a comic chapter about polar bears and blimps — but the story is weak and ends by getting the reader to believe that Washington really is an OK place if only you get the right people elected.

To be a little blunter, I think this is the book that Robinson wrote after reading Naomi Klein’s This Changes Everything and seeing Trump elected instead of Clinton. Klein’s book is a great read in terms of understanding the scale of the environmental crisis and its roots in capitalism. But she fails to put across a revolutionary challenge and falls back on a Keynesian solution — where neo-liberalism ends and the state is more directly involved. These are laudable aims, but as a solution to exploitation, oppression and environmental crisis it is inadequate. In Robinson’s homage to New York, even a highly flooded one, it underpins a very weak novel indeed. Sadly, you can imagine someone reading this and concluding that climate change isn’t actually that bad.