“This necessary book details the full spectrum of environmental issues facing us today, demonstrates their scientific and political causes, and delivers a sobering warning”

“This necessary book details the full spectrum of environmental issues facing us today, demonstrates their scientific and political causes, and delivers a sobering warning”

Michael Ware is a socialist and climate justice activist in Vermont. His review of Facing the Anthropocene is reposted, with permission, from the Winter 2017-18 issue of International Socialist Review, which titled it Ecosocialism or Planetary Barbarism. 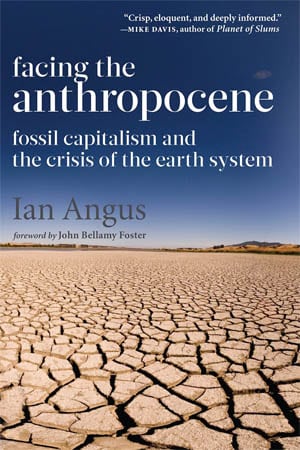 Gaslighting is not a source of methane emissions but a form of psychological manipulation, if not mental torture, that the forty-fifth president deploys against the billions of people concerned about climate change. Trump’s withdrawal of the United States from the nonbinding Paris Climate Agreement demonstrated how he would like to make others doubt their own sanity. Thankfully, Trump’s teenage intellect and incoherence limit his effectiveness.

According to Stephen Bannon and Environmental Protection Agency (EPA) head Scott Pruitt, poor little America got hoodwinked by devious Asians, signing a deal that would wreck the economy and throw millions of people out of work, especially (white) coal miners in Appalachia, whom the president loves dearly. Climate change is an insignificant issue compared to these hardships and injustices. Coal is a fantastic fuel that will return America to greatness.

Contrast this with the closing of Ian Angus’s Facing the Anthropocene: Fossil Capitalism and the Crisis of the Earth System:

“The Holocene is over. The Anthropocene has begun. That cannot be reversed. The climate changes already under way will last for thousands of years. No currently available technology can restore extinct species to their former abundance. The acid in the oceans cannot be removed. Many glaciers have melted and much polar ice is gone forever. The oceans will continue rising…. In Barry Commoner’s words, ‘the present system of production is self-destructive; the present course of human civilization is suicidal.'”

Angus’s book details the full spectrum of environmental issues facing us in the early twenty-first century, clearly demonstrates their scientific and political causes, and finishes with a sobering warning: Capitalism’s endless appetite is metabolically unsustainable; ecosocialism must be built quickly and thoroughly.

Many ISR readers and ecosocialists will be familiar with Angus, editor of the online journal Climate & Capitalism. A Canadian author, activist, and Marxist, Angus became an active socialist in 1964. For the past few decades, he has been at the forefront of popularizing ecosocialism and educating layer upon layer of activists about the need for an ecologically rooted Marxism.

Facing the Anthropocene is a three-part examination of the largest crisis that will ever face humanity. Angus structured the book using short, rich chapters for a general left audience, but climate scientists or theoretically minded socialists will appreciate the book’s coherence and scientific rigor.

Part One, “A No-Analog State,” focuses on the dramatic destabilization of the Earth System since 1945, a shift so significant and sudden in geologic time that climatologist Paul Cruzen famously coined the term “Anthropocene” in 2000 to refer to the new geologic era marked by human impact. The data backing up this claim are irrefutable. Nearly all of the twenty-four Earth System trend charts in chapter two resemble a hockey stick with its short end facing up. Angus unpacks Earth System studies, which view the state of Earth’s biosphere through multiple interconnected boundaries from the level of CO2, nitrogen, and ozone, to surface temperature and ocean acidification. Using ice cores from Greenland, for example, we now have a far clearer understanding of climate history and variability. By mixing scientific and social data, we know that unrestrained economic growth will make most of the Earth uninhabitable within a few generations.

This new data shows how climate volatility was more common in the prior 2.5 million years than the warm stability of the Holocene, which began 11,700 years ago and bracketed the rise of agriculture and class society. Sudden heating and cooling is more common, caused by subtle wobbles in the Earth’s orbit. Angus quotes geologist Richard B. Alley to drive home the point that climate change can happen quickly and that recent human activity is as potent a geological force as changes in the Earth’s orbit, which have played a role in suddenly shifting average surface temperatures up or down:

“Large, abrupt climate changes have repeatedly affected all or much of the earth, locally reaching as much as 10°C change in 10 years. . . . The abrupt changes of the past are not fully explained yet, and climate models typically underestimate the size, speed and extent of those changes. Hence future abrupt changes cannot be predicted with confidence, and climate surprises are to be expected.”

Earth System studies encompass a broad range of chemical, biological, and geological processes and formulates planetary boundaries or thresholds. Fluctuations in one area impact another. The system is never static. This dialectical approach shows how a sustainable society would need to rebalance all aspects of the Earth System, not simply reduce CO2 emissions. Driving a Prius won’t solve much.

One part of the Earth System is the ozone layer. The need for cheap, stable refrigerants led to the creation of synthetic gases called chlorofluorocarbons or CFCs in the 1920s, which became widely used in aerosol spray products. Despite DuPont’s early denials, a single CFC molecule could destroy up to 100,000 ozone molecules. Angus explains the process from need to discovery to overuse, which, “opened a massive hole in one of the globe’s basic metabolic systems: it disrupted the complex interaction between ultraviolet radiation and the ozone layer, a process that has protected life on Earth for billions of years, bringing it to the brink of collapse—and it did so with frightening speed.”

This type of catastrophic change is what we face in multiple parts of the Earth System. Thresholds in CO2 and nitrogen have been surpassed. Quantity turns into quality. Tipping points have been reached, causing feedback loops like the accelerating rate of polar ice melt.

The scientific basis of Part One sets up a convincing and rigorous case against our current system in Part Two, “Fossil Capitalism.” In chapter 7, Angus outlines the fundamental difference between nature’s slow pace and the compression of time under capitalism, to show how the latter is consuming hundreds of millions of years of stored solar energy (fossil fuels) within a couple of centuries. The relentless consumption of natural resources is due to the nature of the system. The market works best for those economies that maximize the rate of exploitation of both nature and human labor. In the case of natural resources, imperial nations use whatever political, military, and economic power is necessary to extract those resources as cheaply and quickly as possible, often at the expense of the Global South.

We are also running out of fresh water, filling the oceans with plastic, killing off coral reefs, overfishing, and overfertilizing soil. But despite the evidence, capitalism cannot slow down. This is known as the “ecological tyranny of the bottom line,” which shows that (1) the market does not function without profit and cannot solve a problem that profit engenders, and (2) we have no democratic means to control ecologically destructive practices under capitalism, since that control would necessarily threaten the accumulation of wealth.

If chapter 10, “Accelerating into the Anthropocene,” demonstrates the obscene pace of our self-destruction resulting from the rampant thirst for profit, then chapter 11, “We Are Not All in This Together,” emphasizes that the rich burn more carbon. The majority of emissions and overconsumption come from the North America, China, and the European Union; but within those regions, those at the top of the economic food chain use far more resources than the rest.

The response of Western elites to potential and actual drought, famine, and conflict due to climate change ranges from calculated neglect to militarized adaptation, or “environmental militarism”—using forcible means to restrict the flow of refugees from affected regions, as we see today with the Syrian refugee crisis, for example. This evolving role for the US military adds to its horrific record of radiation poisoning, glutinous fossil fuel consumption, and war waged to assure the continual flow of cheap oil.

Part Three, “The Alternative,” strikes all the right notes, but Facing the Anthropocene is not primarily a book about ecosocialist strategy. Its fundamental strength lies in its sober assessment of where we are in the trajectory of the climate crisis and how we got here. This reviewer couldn’t help wanting more about how the movements can go beyond our current limitations. It’s a hard question to answer, one that the global decline of the Left, labor struggles, and class politics doesn’t make any easier.

Angus warns against faith in liberal politicians or ultra-left “guerilla attacks on infrastructure,” citing Chilean Marxist Marta Harnecker: “Being radical lies rather in creating spaces where broad sectors can come together and struggle.” Angus urges a united-front approach where Marxists ditch sectarian ways of the past by being “pluralist and open to differing views within the green left.” The principles of how socialists should work within movements are well-defined. Beyond that is the question of how the environmental movement will exert power. Protest, education, and direct action all have a place, but eventually we need to disrupt business as usual. We need a revival of radical trade unionism, strikes, and occupations, as well as more militant forms of political organization if we want to undermine the corporate power preserving the energy and agricultural status quo. That will be a messy and difficult process.

At several points, Angus makes reference to monopoly capitalism as the current stage of capitalism, referencing the work of Paul Baran and Paul Sweezy’s Monopoly Capitalism, published in 1967. Competition is no longer its dominant feature. Stagnation and decline have replaced the more dynamic aspects of early capitalism. These brief mentions seem at odds with the rise of China and the international competition driving the Great Acceleration, especially over the past forty years.

While capitalism certainly pushes consolidation and the swallowing of rival capitals by bigger ones, it never fully overcomes its competitive drive, particularly at the international level, where fossil fuel politics matter most. The Trump administration’s economic nationalism and total embrace of coal, fracking, tar sands, and oil is a reaction to the growing threat of China’s economic power and the need for cheap energy and tariffs to bolster flagging domestic growth. International competition and market gluts undermine already weak international agreements like the Kyoto Protocol or the Paris Climate Agreement. By abandoning both, the United States has set off a chain reaction of regulation avoidance based on competition.

That said, Facing the Anthropocene is a necessary book. The long bibliography is an excellent resource in its own right and could fill your reading list for a decade or more. Angus’s talent lies in taking this wealth of knowledge and using it judiciously. The result is an accessible and convincing case for ecosocialism. Read it, hold discussion groups on it, and stock it on your literature table. Invite Ian to your campus or community to speak. Educate. Agitate. Organize. Our lives may depend on it.