Kim Stanley Robinson’s new novel delivers a powerful vision of Earth in crisis and Earth transformed, but fails as a program for change 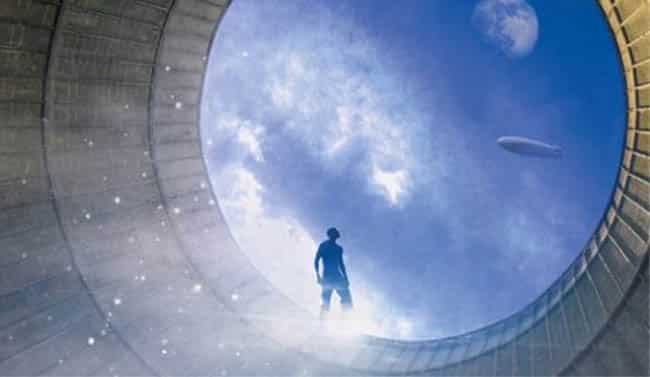 Kim Stanley Robinson
THE MINISTRY FOR THE FUTURE
Orbit, 2020

With all the environmental threats that humanity faces, it can be hard to be optimistic. This is reflected in the plethora of disaster novels that have appeared in recent years, whether inspired by climate change or pandemic, that explore in the appalling consequences of disease, floods, famine and so-on.

Kim Stanley Robinson’s latest novel also deals with these threats, in particular the twin ecological crises of biodiversity loss and climate change, so I approached it with trepidation — after 2020, who needs more doom and gloom?

But The Ministry of the Future is filled with hope. While Robinson does not duck the human costs of disaster — his opening chapters deal with the human consequences of a huge heat wave in India that claims the lives of hundreds of thousands — he tells a story of humanity surviving ecological disaster, seen through the eyes of those who make it happen and those who witness its worst extremes.

So the opening heat wave is a unflinching portrayal of the horrors of a heat wave in a country were few people have air-conditioning. Lest Robinson be criticized for telling this story through the eyes of a wealthy, white, aid worker, it’s precisely his relative affluence that allows Frank May to survive. His trauma and survivor’s guilt is a key component of the book’s overarching story.

A second key figure is Mary Murphy, the Irish head of the United Nations body of the title — The Ministry for the Future. This underfunded UN body has been set the task of speaking out for the yet unborn global generations. Mary has the near impossible task of convincing politicians, governments, bankers and corporate leaders to act. Frank — desperate to see an end to the environmental carnage — tries to kidnap Mary in an attempt to force global institutions into action. 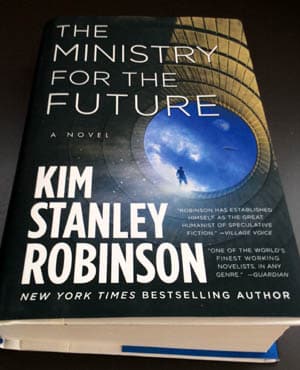 How the Ministry becomes the driving force that turns global environmental crisis into a “green” future is the basis for much of the story. If this was all there was, it would be fairly dull fare, but novel is succeeds because Robinson’s narrative roams across the human experience of ecological disaster.

Short chapters, some of them barely a few paragraphs, tell a remarkable story of environmental crisis and recovery. Some follow the horrific experiences of climate refugees, fleeing hunger, flooding and drought — trapped by racism, political indifference and government bureaucracy for years in transit camps. Other chapters follow Indian pilots as they release chemicals into the atmosphere to prevent another heatwave, or indigenous people as they herd animals into areas that have been cleared of people to re-wild the landscape.

We find ourselves in the midst of consultancy meetings in small US towns as the government informs people they must relocate to open up the landscape for massive rewilding projects. We stand with scientists in the Antarctic as they work out ways of slowing the melting of ice-caps, and in a couple of unusual chapters that reminded me of the ecological fiction of the US author George R. Stewart, Robinson gives voice to animals, carbon atoms and photons, innovatively exploring ecosystems and the carbon cycle.

Crucially, we also follow a growing number of environmental terrorists who use violence to force change on governments, corporations and the public at large.

By the end of the book Mary retires, and travels the globe in a zero carbon blimp observing the new, sustainable world. The Ministry has stopped runaway climate change and begun the process of reducing carbon in the atmosphere. Mary watches herds of animals in massive wildlife areas in North Americas. Dedicated corridors allow animals to migrate thousands of miles across the continent. She travels to the Antarctic to see how the glaciers are recovering and enjoys the festivities that mark the Earth’s escape from environmental destruction. Refugees return home or are welcomed by their host nations, given cash and support to rebuild their lives. Thousands of species are saved.

Environmentalists will spot references to dozens of proposals, whims and ideas that have been put forward over the years to protect the environment. In a nod to genetic engineering, there is even a passing mention about reintroduced mammoths.

It is a beautiful vision of the future, one that socialists, climate strikers, and social justice warriors of all stripes can happily think of as we relax after a hard day’s activism. While all of us have, at one time or the other, grappled with how we might get to a sustainable future. Robinson has tried to answer the question, as well as asking what might saving the world look like?

Unfortunately, while Robinson’s strategy for works as a novel, it is a fantasy.

I found myself enjoying the novel enormously while simultaneously feeling hugely frustrated with its politics. This feeling of discomfort continued until I realised that to truly enjoy the book I had to treat it as an escapist fantasy just as I did when reading Robinson’s books on terraforming Mars or humans travelling to a nearby star. Once I did that, it all clicked into place.

While admiring Robinson’s characters and his detailed future history — as well as his explorations of economics, science and politics — I had to suspend disbelief when it came to the solutions offered.

In his review of The Ministry for the Future, environmentalist Bill McKibben said it was “not utopian, it’s anti-dystopian, realist to the core.” That is only accurate if you believe that fossil fuel capitalism will willingly give up its wealth and power.

Robinson describes not the overthrow of capitalism and its replacement with a democratic sustainable socialist alternative, but capitalism’s conversion into a benign, progressive force, using financial mechanisms. Currency is linked to emissions through a “carbon coin” that Robinson is adopted because of a groundswell of public demand, and created by a maverick Chinese central bank.

Robinson played with the idea of revolution through currency in his 2017 novel New York 2140. I did not find it believable then, and while it is much more central to Ministry for the Future, it still felt unrealistic. Financial schemes that involve placing prices on an aspect of nature — whether forests or carbon — do not work because they don’t break the fundamental dynamics of capitalism. To be fair to Robinson’s he doesn’t pretend they will. In his fantasy, the capitalist powers succumb to economic and popular pressure.

This limitation is even clearer when we look at the ecoterrorism that Robinson describes. In a short but illuminating chapter, on one day terrorists use swarms of mini-missiles to shoot down all polluting aircraft — but not zero carbon blimps — killing thousands of passengers. Similar attacks torpedo cargo boats. This forces a switch to low carbon international transport, a feverish switch to blimps and solar powered ships.

That’s dramatic, but utterly unbelievable. We know from the Covid pandemic that the governments have rushed to protect fossil fuel heavy industries like airlines. We know that terrorist threats always lead to military response. The idea we can force corporations to surrender through terrorist attacks is a fundamental misreading of the way that states to any threat to capitalist accumulation.

What Robinson suggests is that in most areas of the fossil fuel economy the capitalists are just a nudge away from making a transition to low or zero carbon industry. That nudge might be ecoterrorism, the arrival of a viable carbon currency or alternative means of making profits. But all it needs is nudge. Sadly, history shows that what really happens is that the capitalists fight to maintain their profits and their market position.

Closely linked to his vision of political and economic change is Robinson’s obsession with the technical innovations that will solve environmental crisis. Some chapters of the novel explore in great detail these blimps, power stations, ships and other technology. It is a tribute to Robinson’s skills as a writer that he can make a chapter dedicated to describing the technical problems of pumping vast quantities of meltwater onto a glacier interesting.

However, he never manages to explain why this happens. Just saying that oil companies will do it because it is profitable doesn’t make it credible. People poke fun at Star Trek for the “technobabble” used to explain away plot holes. Robinson pushes his plot forward with economic-babble.

So Bill McKibben is wrong: The Ministry for the Future isn’t dystopian, but it is utopian. It works if you believe that capitalism is liberal and most capitalists actually want to make the world work in the interests of the majority. That is demonstrably untrue.

While reading The Ministry for the Future I was also reading Bill Gate’s execrable book How to Avoid a Climate Disaster. Both depict a way out of economic and environmental crisis using technology and benign capitalism. Both are, in their different ways, eco-modernist fantasies.

That said, Kim Stanley Robinson’s novel works as literature because he is a great storyteller. His vision for the future is utopian but the book is imbued with a deep belief in humanity. Robinson cares about refugees, the poor and the dispossessed. He worries about the environment and he has a detailed understanding of the economic, scientific and political causes of ecological disaster. In this sense, he is the polar opposite of Bill Gates, who sees climate change as an opportunity to make profits.

The Ministry for the Future deserves to be read as a passionate call to save the earth, but not as a credible program for change.