In ‘A Redder Shade of Green,’ did Ian Angus unfairly criticize people who believe overpopulation is a major environmental problem? 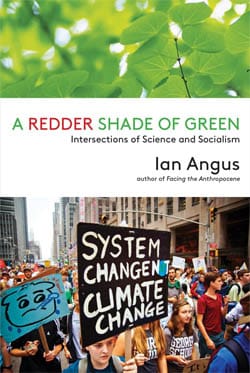 Ian Angus’s book, A Redder Shade of Green, was published this year by Monthly Review Press

In ‘A Redder Shade of Green,’ did Ian Angus unfairly criticize people who believe overpopulation is a major environmental problem?

A CRITICISM OF ‘A REDDER SHADE OF GREEN’

I bought the book because his earlier work on the Anthropocene was quite instructive, particularly his article in MR in 2016. In this book, I read chapter 7, “The Return of the Population Bombers,” and decided it was not worth reading the remainder.

In this chapter, he created his own “straw man” and proceeded to destroy it. His straw man was a caricature of those who see world population as a problem. He described them as bigots, lobbyists, advocates of compulsory birth control, directed only at poor countries, immigrants as enemies of the environment. He fails to understand that over-population is a real problem while at the same time being very difficult to fix without trampling on human rights. Creating a straw man is a cheap and facile style of argument.

The problem with over population includes: loss of biodiversity, production of waste, plastic pollution, climate change, fish depletion, over-development, etc. I am involved in conservation of the ecosystem in a few watersheds near Georgian Bay. We are always fighting against population growth which is encroaching on natural areas. My perspective is that population growth should be resisted everywhere (not just poor people) while, at the same time, allowing refugees but discouraging other migrations.

Angus fails to clearly identify capitalism as the proponent of population growth along with all other forms of growth. Economic growth is not the same as economic performance where equality is valued as well as valuing the natural world. He says it divides our progressive forces by claiming that too many people is the problem. Can he not accept that we need to combat on all fronts, especially neo-liberalism and excessive growth as well as over-population? None of these battles is easy but all are important.

Don, thank you for taking the time to explain what you thought of that chapter, and why. Your thoughtful comments are part of the discussion of “essential arguments” that the book aims to stimulate.

You charge me with creating a “straw man” — with misrepresenting the views of people who see population as a major environmental problem. I plead not guilty, on two grounds.

First, because the connections between overpopulation ideology, compulsory birth control programs and anti-immigrant bigotry are very well documented. Overpopulation arguments have been used for decades to oppress the poor and people of color around the world and to justify anti-immigrant campaigns that Betsy Hartmann calls “the greening of hate.” As the noted socialist scholar David Harvey says, “Whenever a theory of overpopulation seizes hold in a society dominated by an elite, then the non-elite invariably experience some form of political, economic, and social repression.” That’s not a caricature or a straw man: it is reality.

Second, because throughout the chapter I strongly distinguish between bigots and the “many activists who honestly want to build a better world and are appalled by the racists of the far right [but] are also attracted to populationist argument.” In fact, much of the chapter is devoted to a discussion of why long-disproven overpopulation arguments continue to be used by “people who actually care about the environment, who aren’t just using green arguments as an excuse to bash immigrants.” In short, I didn’t say you are a bigot, I said you are wrong.

The environmental crisis demands rapid and decisive action, but we can’t act effectively unless we clearly understand its causes. If we misdiagnose the illness, at best we will waste precious time on ineffective cures; at worst, we will do even more damage. Focusing on population growth isn’t just ineffective, it is harmful. Instead of confronting the real eco-vandals, it targets the victims of environmental destruction, people who don’t destroy forests, don’t wipe out endangered species, don’t pollute rivers and oceans, and emit essentially no greenhouse gases.

You say that we need to “combat on all fronts.” The problem is that fighting to cut immigration and birth rates is incompatible with fighting for social justice. It’s not that we don’t have the resources to do both — it’s that populationism is an anti-social, anti-human ideology, no matter how sincere some of its advocates may be. The suggested readings listed below address these issues in more depth I can do in a short reply.

Obviously we have a serious disagreement, but the left can only gain from frank and open discussion of our differences. C&C welcomes further comments on this important subject: please be concise and respectful.

Some recommended readings on population and social justice

The chapter of A Redder Shade of Green that Donald Kerr criticizes is also available online:

Simon Butler and I addressed the issue in depth in this book:

Over 120 Climate & Capitalism articles tagged “population” are listed here. You could start with these: