Six new books on democratic eco-socialism, war and the environment, genes and intelligence, climate change and the Roman Empire, the little ice age in North America, and views of the Anthropocene 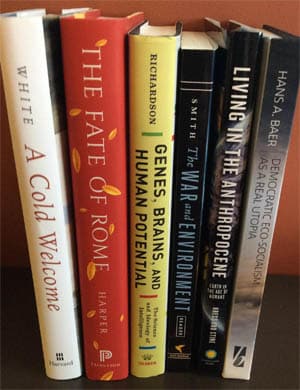 Six new books on democratic eco-socialism, war and the environment, genes and intelligence, climate change and the Roman Empire, the little ice age in North America, and views of the Anthropocene

Hans A. Baer
DEMOCRATIC ECO-SOCIALISM AS A REAL UTOPIA
Transitioning to an Alternative World System
Berghahn Books, 2017
Critical anthropologist Hans Baer argues that the left must re-evaluate historical definitions of socialism, commit to social equality and justice, and prioritize environmental sustainability. He describes democratic eco-socialism as a system capable of mobilizing people around the world, albeit in different ways, to prevent on-going human socio-economic and environmental degradation, and anthropogenic climate change.

Gar Smith, editor
THE WAR AND ENVIRONMENT READER
Just World Books, 2017
While many books have examined the broader topic of military conflict, most neglect to focus on damage military violence inflicts on regional — and global — ecosystems. The War and Environment Reader provides a critical analysis of the devastating environmental consequences of war. A wide array of diverse voices and global perspectives discuss the historical, political and psychological roots of war, the business of war, the environmental and social consequences of war, and the alternatives.

Ken Richardson
GENES, BRAINS, AND HUMAN POTENTIAL
The Science and Ideology of Intelligence
Columbia University Press, 2017
Bio-deterministic ideology, a shallow nature-versus-nurture debate, and the overhyped claims of genome reductionists have encouraged fatalism about the development of human intelligence among individuals and societies. Building on new work in molecular biology, epigenetics, dynamical systems, evolution theory, and complexity theory, Richardson maps a fresh understanding of intelligence and the development of human potential.

Kyle Harper
THE FATE OF ROME
Climate, Disease, and the End of an Empire
Princeton University Press, 2017
The fate of Rome was decided not just by emperors, soldiers, and barbarians but also by volcanic eruptions, solar cycles, climate instability, and devastating viruses and bacteria. The Romans were resilient in the face of enormous environmental stress, until the besieged empire could no longer withstand the combined challenges of a “little ice age” and recurrent outbreaks of bubonic plague.

Sam White
A COLD WELCOME
The Little Ice Age and Europe’s Encounter with North America
Harvard University Press, 2017
When Europeans first arrived in North America, the average global temperature had dropped to lows unseen in millennia, and its effects were stark and unpredictable. Blizzards and deep freezes, droughts and famines, and winters so cold that even the Rio Grande froze. Wholly unprepared for such harsh conditions, Europeans suffered life-threatening privation, and their desperation precipitated violent conflict with Native Americans.

John W. Kress and Jeffrey K. Stine, editors
LIVING IN THE ANTHROPOCENE
Earth in the Age of Humans
Smithsonian Books, 2017
An anthology of views on the causes of the Anthropocene, the environmental and biological systems that have been changed and affected, how societies are responding and adapting to these changes, how these changes have been represented in art, film, television, and literature.