British Columbia’s carbon tax has been held up as a climate success, but an analysis of the province’s emissions under the tax tells another story. 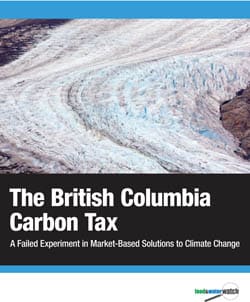 Our planet’s climate crisis is intensifying, but many in industry, government and even the advocacy community have turned to market mechanisms to alleviate climate change instead of regulating the pollutants that cause it.

These free-market approaches rely on putting a “price” on climate change-inducing emissions — such as imposing taxes on carbon — as an indirect method to reduce these pollutants.

The Canadian province of British Columbia implemented a carbon tax on certain fossil fuels in July of 2008. Some experts and pricing proponents are using the British Columbia carbon tax example to promote carbon taxes and other market mechanisms as a way to purportedly reduce greenhouse gas emissions and address our climate problem.

Most of the modest and short-term reductions in emissions seem to be related primarily to the 2008 global recession, not to the carbon tax. More recently, British Columbia’s emissions have resumed their rise.

This report examines the British Columbia program and finds that this type of pricing approach is not going to save the planet or safeguard our communities. A more straightforward approach of regulating emissions would be significantly more effective at curbing climate change.

Meanwhile the oil and gas industry is throwing its support behind carbon taxes, rather than strong regulations to limit emissions, arguing that market solutions are the best way to address climate change.