How will future geologists recognize the beginning of the Anthropocene in rock records? Quite possibly by an unprecedented accumulation of fossilized trash. 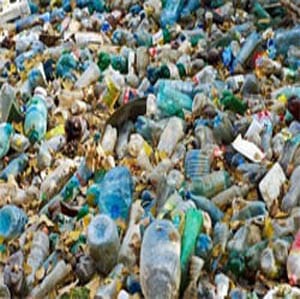 An article by Andy Revkin in the new magazine Anthropocene drew my attention to the abstract of a talk given last summer at the 24th biennial meeting of the American Quaternary Association. (The Quaternary period began two-and-a-half million years ago. The proposed Anthropocene epoch would be a subdivision of it.)

In the official program, the paper was formally titled Defining the Cenozoic-Anthropozoic or ‘C/A Boundary Event.’ Informally, on the slides, it was called The Earliest Anthropocene and the ‘Age of Garbage’. The principal author and presenter was geologist Jay Quade of the University of Arizona.

“Field geologists tens of millions of years from now will probably define the base of the Anthropocene by the first appearance of trash, because trash is much more obvious and ubiquitous than hominim fossils. Human trash first appears in Africa during the late Pliocene in the form of stone tools. In this talk I will discuss old stone tools found at Gona in Ethiopia from the perspective of a stratigrapher and paleoecologist: what they are made of (carefully selected raw materials), how they were dated (2.58 Ma: paleomagnetism and 40Ar/39Ar), where they occur on the paleo-landscape (floodplain margins), and the possible reasons for their rather sudden appearance stratigraphically.

“Trash really started to pile up in the Neolithic when people settle down, so in the second part my talk I will examine the bulk composition and geochemistry of trash from a Neolithic archeological site, Asikli, in central Turkey. Most archeological tells are just large trash heaps that will really stand out and preserve readily in the future geologic record. Physically, the tell at Asikli is dominated by building debris, wood ash, and minor bone and obsidian. Chemically, the tell at Asikli contains conspicuously high soluble Na+, Cl-, NO3-, and 15N values of =+13‰. We suggest that these salts derive from urine—
both human but probably mostly animal. The abundance of urine at Asikli is plausibly linked to very early animal domestication and corralling on the site itself.

“The first appearance of trash was globally quite diachronous, probably disqualifying trash as a near-term marker of the basal Anthropocene. However, tens of millions of years from now field geologists will chiefly recognize us for our trash, whereby the Cenozoic “Age of Mammals” is succeed by the Garbocene, the ‘Age of Garbage’.”

The final slide in his presentation said: “We are creating the mother of all stratigraphic marker horizons … truly a global trash layer.”

I hope the full talk will be published. In the meantime, here are the slides.