Cowspiracy’s argument is based on badly flawed and almost unanimously rejected interpretations of science. Actual science and scientists are hard to find among the many talking heads in the film. 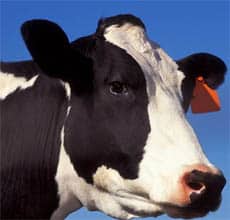 Doug Boucher is scientific adviser, Climate and Energy, at the Union of Concerned Scientists. This article is reposted, with permission, from his blog on the UCS website.

Movie night at my house last weekend, featuring Cowspiracy. The name says it all. The 2014/2015 movie by that name—“The Film That Environmental Organizations Don’t Want You to See,” according to its website—has uncovered an immense conspiracy between governments and the world’s biggest environmental organizations, to deceive the public about the principal cause of global warming. But the film’s premise is based on badly flawed—and almost unanimously rejected—interpretations of science.

According to Cowspiracy, the major source of global warming pollution isn’t fossil fuels like coal, oil, and natural gas, as the world’s scientists are telling us. No, it’s animal agriculture—not just eating cows, but all other kinds of meat, and eggs and milk and fish too. So the principal solution to global warming isn’t renewable energy. It’s for everyone to become a vegan.

Cows worse than fossil fuels? Not by a long shot

Central to Cowspiracy’s conspiracy theory is the supposed “fact” that a 2009 study found that 51% of all greenhouse gases are produced by animal agriculture.

A good deal of the movie is taken up with interviews with people from environmental organizations, such as the Rainforest Action Network, Oceana, and the Natural Resources Defense Council, who don’t seem to accept this “fact,” and therefore must be part of the conspiracy to cover it up. Greenpeace politely declined, twice, to be interviewed, proving that they’re part of the cowspiracy too.

Since the 51% figure is key to the film’s conspiracy theory, let’s look at the study that it comes from. Ironically, in light of Cowspiracy’s thesis that environmental NGOs are hiding the science, this study proposing this figure on which they rely so heavily was not published in a scientific journal, but in a report by an environmental organization, the Worldwatch Institute. The report’s authors, Jeff Anhang and the late Robert Goodland, were not named in the movie but were described simply as “two advisers from the World Bank.”

How did Goodland and Anhang come up with 51%, rather than the scientific consensus that livestock are currently responsible for about 15% of global greenhouse gases (which includes direct emissions from the animals as well as emissions from feed production, land use change, and manure)?

The biggest single difference is that Goodland and Anhang also count the carbon dioxide that domesticated animals breathe out—i.e., respiration. You probably remember the basics of this from biology class. The biosphere is basically powered by the photosynthesis done by plants, which take up CO2 molecules from the atmosphere and use the sun’s energy to link those molecules together, making sugars, starches, fats, and (adding in other elements) proteins, DNA, and all the other parts of the living world. In doing so, they release oxygen, which now makes up about 21% of the atmosphere.

The planet’s “heterotrophs”—animals, fungi, and most bacteria and other microbes—can’t photosynthesize, so they need to get their energy from eating or decomposing the molecules produced by photosynthesis. Generally heterotrophs do this by reversing the process of photosynthesis—taking in oxygen, using it to break apart the energy-rich molecules created by the plants, and releasing CO2 back to the atmosphere. This is the process of respiration.

But Anhang and Goodland’s addition of the CO2 produced by livestock to the planet’s greenhouse gas emissions, ignores a simple but critical point: plants respire too. They do both of the fundamental processes, not only photosynthesizing but respiring as well.

This respiration is how they get the energy they need to maintain themselves, take up water and nutrients, and carry out all the other chemical reactions needed to live. In the process, they release most of the CO2 that they’ve taken in. And what they don’t is almost all released after they die, by respiration done by decomposers such as fungi and bacteria.

As a result, the CO2 that plants take out of the atmosphere, goes back into the atmosphere, whether or not they are eaten by animals. Thus, livestock (and other animals, including both wild and human ones) don’t add to the amount of CO2 that gets emitted into the atmosphere. This is why scientists reject Goodland and Anhang’s counting of livestock respiration as an additional anthropogenic source of greenhouse gases. It’s not additional—it would happen anyway, so you’re not justified in adding it in.

Changing the impact of methane

There is one important difference when it comes to a relatively small number of animal species. These are the ruminants, which include domesticated animals such as cows, sheep, and goats as well as wild ones such as deer and antelope.

Their digestive system includes a “rumen,” which contains microbes that can break down cellulose, which most animals cannot. Unfortunately, in the process these methanogenic microbes convert some of the carbon into methane (CH4), which is a much stronger greenhouse gas than CO2. It causes about 25 times as much global warming per molecule as CO2, according to recent scientific consensus.

The release of methane to the atmosphere by ruminants, both directly from both ends of the animal (what is called “enteric fermentation”) and in their manure, is additional. It wouldn’t happen if the ruminants didn’t eat those plants, allowing the methanogenic microbes in their rumens to break it down and use it to produce methane. So scientists most definitely do count ruminant methane in their estimates of global warming pollution, and in fact it’s the largest single contribution to the nearly one-fourth of total emissions that come, directly and indirectly, from global agriculture.

However, Goodland and Anhang didn’t count it in the same way that most scientists do. Rather than weight the contribution of methane as 25 times as large, per molecule, as that of CO2, they use a weighting factor of 72 times, increasing its estimated impact nearly three-fold.

Why do they do this? Instead of using the standard method that estimates the global warming impact of gas molecules over a century, they only count its impact, as well as CO2’s, over a 20-year period. Since methane only lasts in the atmosphere for a decade or two before breaking down, while CO2 stays there for many centuries, counting the effects of both over only the first 20 years increases methane’s relative impact considerably. So, even though there hasn’t been any change in either the amount of CO2 or the amount of methane actually being emitted, the estimate of global warming pollution goes up substantially—with most of the blame going to cattle.

There has been a lot of scientific discussion about the best way to add together the global warming impact of different molecules, and it’s likely to continue.

It depends just how long you think global warming is likely to be an urgent problem. If it’s something that is going to be critical to human society for the rest of the 21st century, that argues for using the standard 100-year period for calculating the effect of greenhouse gases. If you’re pessimistic and think that we won’t be able to stabilize global temperatures for even longer than that, then you can argue for even more than 100 years.

On the other hand, choosing to take the average over only 20 years, as the Worldwatch study did, is tantamount to saying that we only care about ourselves, not our children, our grandchildren, and future generations. If global warming continues beyond the next two decades, that’s somebody else’s problem. I don’t find this an acceptable approach, either scientifically or morally.

These two departures from the scientific consensus—counting the non-additional CO2respired by livestock, and weighting the methane that ruminant animals emit nearly three times as heavily as most scientists do—account for the biggest differences between the scientific consensus of about 15% of emissions and the 51% figure that Cowspiracy uses.

There are other differences that add smaller amounts—e.g. the estimate of emissions from animal-agriculture-driven deforestation, their use of a much higher count of how many livestock animals there are globally than the U.N. does, their dividing their “animal agriculture” total by a relatively small denominator, which makes the percentage higher, etc. They all have similar scientific weaknesses, and they all have the same kind of impact on the percentage, making it come out much larger (and thus making the importance of fossil fuels and energy smaller) than the scientific consensus says.

How has the scientific community responded to the 2009 Goodland and Anhang study and their 51% figure? We’ve rejected it, nearly unanimously, for the reasons I’ve explained.

Neither the reply to their study in a scientific journal, nor the more recent research papers on the subject, nor the latest reviews of the state of the science, nor the most recent report of the IPCC, written by thousands of scientists from all over the world and accepted as the scientific consensus on climate science—none of these have adopted the 51% figure.

Despite the efforts of both advocates like the makers of Cowspiracy and by the fossil fuel industry (see UCS’ recent report The Climate Deception Dossiers for details), there is strong agreement among scientists as well as among the global public that global warming is happening and humans, principally through the fossil fuels we burn, are the main cause of it.

And who is in cahoots?

I must admit that there’s another, more personal, reason I find it hard to believe that there’s a massive conspiracy among NGOs and scientists to conceal the impact of animal agriculture on the climate.

That’s because my UCS colleagues and I—scientists at an NGO that focuses on climate change—have been writing and speaking extensively about the climate impact of livestock for several years now. And particularly about the impact of cows, especially beef cattle, which have a much heavier global warming hoofprint than other sources of food (including other animal foods).

We’ve been disseminating this scientific information not just in this blog (both recently and years ago) but also in major reports such as Root of the Problem (2011), Grade A Choice? (2012),Climate-Friendly Land Use (2013), as well as in scientific papers and the  2012 book Cooler, Smarter.

I guess you just have to conclude that the makers of Cowspiracy¸ despite its narrator’s claims of extensive research, just didn’t manage to find any of this work. Or maybe it’s just that our rejection of the 51% figure shows that, along with the rest of the scientific community, we’re part of the Cowspiracy too.

Recent research by social scientists has found that climate science denial tends to be associated with other kinds of conspiracy theory as well. As the title of a paper by Stephen Lewandosky and colleagues put it, “NASA faked the moon landing—therefore climate science is a hoax.”

While the subjects are different, what conspiracy theories about President Obama’s birthplace, the 9/11 attacks, contrails from jet planes, vaccination, and climate change have in common is that they tell us that an incredibly large number of people—in government, in the media, and inCowspiracy’s case, in science and the environmental community as well, have agreed to hide a key piece of information from the public.

Movies like Cowspiracy aren’t believable, not only because of how they twist the science, but also because of what they ask us to believe: that the fossil fuel industry—the ExxonMobils of the world—aren’t the main cause of global warming; that the transition to clean energy isn’t what matters most for our future and our grandchildren’s; and that thousands of scientists have covered up the truth about the most important environmental issue of our time.