By focusing on veganism to the exclusion of all else, Cowspiracy implies that anyone who eats meat isn’t a ‘proper’ environmentalist. This is deeply offensive and elitist, and it harms the movement we need to build.

Danny Chivers is a professional carbon analyst, performance poet, climate activist, and author of the No-Nonsense Guide to Climate Change and No-Nonsense Renewable Energy. This article is republished, under a Creative Commons License, from New Internationalist.

“Why do you keep talking about fossil fuels? Don’t you know that animal agriculture is the biggest cause of global warming? Why don’t you campaign on that? Watch Cowspiracy!”

If you’ve posted anything online about fossil fuels and climate change lately, the chances are you’ve seen a response like this. Cowspiracy: The Sustainability Secret may have started as a crowdfunded documentary by US filmmakers Kip Andersen and Keegan Kuhn but following a year of online success a new version of the film – executive produced by Hollywood star Leonardo DiCaprio – has now been launched on Netflix. The film follows Andersen’s investigation into the climate impact of animal agriculture, and his attempts to get a series of large US environmental NGOs to speak to him about it. It’s a compellingly told story, as most of the green groups seem reluctant to answer his questions or to justify their focus on fossil fuels rather than livestock emissions. 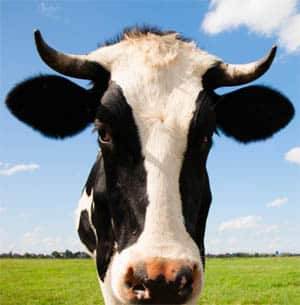 This is not the enemy

The film has built a sizable and vocal following, as evidenced by the critical Cowspiracy-inspired comments that frequently pop up on articles about climate change, bemoaning the lack of coverage of the climate impact of animal agriculture. In Paris for the climate talks in December, there was no escape either. I spotted the headline statistic from the documentary – “animal agriculture is responsible for 51 per cent of global greenhouse gas emissions” – emblazoned on at least one placard or banner at most of the protests I attended in Paris. Kip Andersen himself even turned up at the anti-oil protest outside the Louvre, with a film camera and the 51 per cent figure printed on his shirt, presumably to denounce such fossil-fuel-bashing antics as a waste of time compared to stopping the livestock industry.

There’s only one problem with this eye-grabbing stat: it’s a load of manure. Emissions from livestock agriculture – including the methane from animals’ digestive systems, deforestation, land use change and energy use – make up around 15 per cent of global emissions, not 51 per cent. I’ve been vegan for 14 years and have been asked to justify my dietary weirdness at more friend and family meals than I can count, so believe me – I’ve looked into it. If meat and dairy really were the biggest cause of global climate change I’d be trumpeting that statistic myself every chance I got.

But I don’t. Because it’s not true. The 51 per cent number comes from a single non-peer-reviewed report by two researchers – a report littered with statistical errors. This study counts the climate impact of methane from animals as being more than three times more powerful as methane from other sources [1], adds in an inappropriate chunk of extra land use emissions [2], and incorrectly includes all the carbon dioxide that livestock breathe out [3].

Setting aside this deeply flawed paper and looking instead at more reliable studies, we find that livestock’s real climate impacts – methane, land use change, energy use – make up just under 15 per cent of the global total.

The thing is, 15 per cent is still a huge amount, more than all of the world’s cars, ships, trains and planes put together. Environmental campaigners – including large NGOs – certainly should be doing more to tackle it. Which is why the 51 per cent fake statistic is so painfully groan-inducing. It undermines an important argument and makes otherwise well-meaning people look foolish when they use it.

It’s perfectly possible to make a powerful environmental case against the meat and dairy industry without using made-up numbers. A lot of the rest of Cowspiracy does just that – the film is packed with plenty of real facts about the dreadful deforestation, water use, and local environmental damage caused by animal agriculture. But there’s another major problem with the documentary: it’s built on the assumption that persuading Western people to change their lifestyles is the best way to save the world.

The film presents its viewers with a conundrum: why have the big green NGOs been telling us all to cycle and change our lightbulbs, when they should have been telling us to go vegan? The suggestion that, in fact, neither of those options are going to lead to significant political change never gets a look-in. I hope that wealthier people in the Global North do voluntarily reduce their impact on the climate – through their travel habits, their diets, and everything else – but this is never going to be enough on its own.

We need major changes in the energy, transport and food production infrastructures of the industrialized nations to create affordable, climate-friendly alternatives for all. We also need – as Southern campaigners at COP21 worked hard to point out – a transfer of money and technology from North to South, to allow people to develop out of poverty without trashing the climate. These changes won’t happen without serious political pressure from a global movement for sustainability and justice. Buying a greener brand of toilet paper or cutting meat and dairy out of your diet isn’t going to make that happen.

Cowspiracy also seems to assume that the only people worth targeting with its message are white, Northern and middle-class. One of the most problematic lines in the film is when a commentator says “it’s not possible to be a meat-eating environmentalist.” This statement is presumably meant to prick the consciences of well-off US eco-activists but it sweeps the struggles of millions of poorer Southern and Indigenous peoples under the carpet. Most of the people fighting for a safer global environment aren’t middle-class Northern folks with carbon-heavy lifestyles. They are the people engaged in frontline battles against fossil fuels, local pollution, and – yes – livestock megafarm projects around the world, and they are leading the way in the defence of our shared climate.

By focusing on veganism to the exclusion of all else, Cowspiracy implies that if any of these frontline defenders – including the murdered Brazilian land rights campaigners mentioned in the film – eat meat then they’re not ‘proper’ environmentalists. This is deeply offensive and exclusive, and also ignores the cultural importance of hunted meat in many Indigenous societies. To build the genuinely international climate movement we desperately need, Northern campaigners need to think carefully about the language they use to challenge the industrial livestock industry, and avoid sweeping statements that ignore the struggles of millions of people across the world.

So to anyone who’s been moved by Cowspiracy and wants to take action on animal agriculture, I have a few friendly suggestions:

Well, that’s enough from me – I’ve got a butternut squash that needs roasting. I look forward to sharing houmous sandwiches with you all on an anti-fracking blockade somewhere soon.

[1] The standard way to measure the climate impact of greenhouse gases is over a 100-year time period. However, this method tends to downplay the importance of methane, which is a greenhouse gas that has a more powerful impact than CO2, but remains in the atmosphere for a much shorter time. The authors of the report argue that if we instead consider global warming over a 20-year time period, the impact of the methane from cattle is three times higher. They therefore triple the impact of the methane from livestock in their calculations. However, they do not carry out the same tripling effect on all the rest of the methane produced by human activities – for example, from reservoirs, coal mines and natural gas production. This therefore overinflates the importance of livestock compared with other sources of greenhouse gas.

[2] The study makes an estimate of how much CO2 would be saved each year if all the land used for livestock was turned back into forest and allowed to photosynthesize. This is an interesting calculation, but the authors then make the error of adding these imaginary ‘what if’ emissions onto the real-life annual emissions from the livestock industry. This is a major accounting error – it’s adding together apples and oranges (or possibly pigs and chickens). It makes about as much sense as saying that the annual emissions from fossil fuels should include all the emissions that would have been sucked out of the air if all the oil drillers and coal miners had instead been employed planting trees. It’s an imaginary number, and has no place in a study that claims to present livestock emissions as a meaningful percentage of the global total.

[3] The CO2 from cattle’s breathing is cancelled out by the carbon sucked out of the air by the plants eaten by the cattle in the first place. Animal respiration is part of a cycle, not a source of emissions, which is why it is not included in any serious climate change studies.