New analysis of global inequality shows that the income gap between people in rich and poor countries is far wider than policymakers are willing to admit. 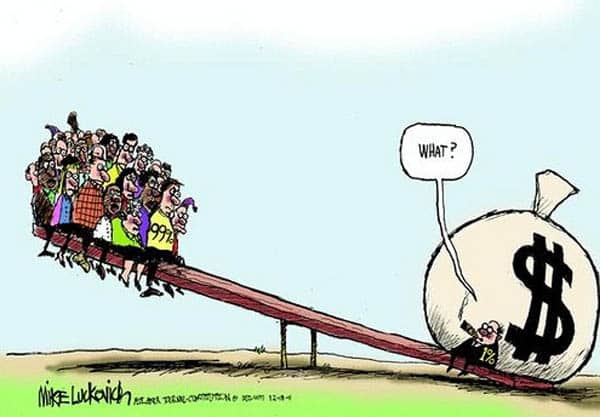 THE INCONVENIENT TRUTH ABOUT GLOBAL INEQUALITY

Crossposted from Share the World’s Resources, under a creative commons license.

Few issues highlight the imperative for a more just distribution of the world’s wealth than the widening gap between those who are considered financially rich and poor. In recent years, public concerns over escalating levels of inequality have reached new heights, partly fueled by the yearly publication of Oxfam’s shocking inequality statistics that demonstrate the degree to which the global economy is structurally unjust and failing the majority of citizens. Given that the richest 1% of the world’s population reportedly own as much wealth as the rest of us combined, there is a general consensus that inequality has reached obscene levels and must urgently be addressed.

But a recent analysis by Jason Hickel suggests that there is a lot more to the problem of inequality than Oxfam’s research reveals, and he suggests that the world is far more unequal than policymakers and economists generally acknowledge. For a start, a huge quantity of wealth is currently hidden away in tax havens and has therefore not been taken into account in Oxfam’s global wealth calculations. Recent estimates suggest that some $7.6tn worth of assets are held in off shore accounts – 25% more than five years ago and equivalent to 8% of the world’s total financial assets. If this money was included in inequality statistics, they would undoubtedly reveal even greater inequality in global wealth ownership.

Hickel also dispels the widely held belief that income inequality is not as problematic as Oxfam’s figures on wealth inequality suggest. According to experts like the economist Branco Milanovic, although income inequality is getting worse within countries, it is actually improving when measured on a global scale. The standard metric used to make such claims is the Gini index, which shows that global income inequality has decreased slightly from 0.72 in 1988 to 0.71 in 2008 (on a scale where 0 indicates complete equality and 1 indicates extreme inequality).

However, drawing on the work of Professor Robert Wade, Hickel points out that the Gini coefficient is a problematic gauge of income distribution as it is a relative measure that doesn’t take into account the absolute difference between people’s incomes. It only highlights differences in the rate of inequality. For example, the Gini measure of inequality would remain constant between two countries (or individuals) if they both doubled their income over a period of time (e.g. country X doubles it’s income from 10 to 20 and country Y from 40 to 80) even though the absolute gap in their income grows considerably (from 30 to 60).

As Wade suggests, using the ‘Absolute Gini’ index instead would be a far better indicator of how inclusively economic growth is distributed, as it would show greater inequality when one country (or person) experienced bigger absolute additions to their incomes than another. Using the Absolute Gini coefficient, Hickel calculates that global inequality (in terms of the global distribution of income) has actually “exploded” in recent decades, rising from 0.57 in 1988 to 0.72 in 2005.

In addition, Hickel presents calculations for the growing gap between per capita income in the United States comparted to various regions in the Global South. According to his analysis, the income gap between the US and three major regions of the developing world (Latin America, sub-Saharan Africa and South Asia) has in each case grown by approximately 200% since 1960. The global inequality gap, he argues, has roughly tripled in size.

These latest revelations build on Hickel’s previous examination of how the statistics commonly used by UN agencies and the mainstream media substantially underestimate the reality of global poverty and hunger, as outlined in STWR’s report on the Sustainable Development Goals. Despite the pervasive rhetoric and received wisdom from governments and UN agencies that we are winning the fight against poverty and the world is therefore becoming less unequal, it’s increasingly apparent that very little is being done to promote social and economic justice on an international basis.

Like hunger and poverty, global inequality is clearly a far more serious and systemic problem than policymakers are willing to admit – and it’s one that requires robust mechanisms for sharing wealth and power more equitably between nations, not just within them. But as long as governments fail to enact the redistributive measures and structural reforms that are now so urgently needed, the responsibility to hold policymakers to account will continue to fall squarely on the shoulders of progressive analysts, engaged citizens and civil society organisations.