Climate change and extreme weather events are not devastating a random selection of human beings from all walks of life. There are no billionaires among the dead, no corporate executives living in shelters, no stockbrokers watching their children die of malnutrition.

Climate & Capitalism editor Ian Angus recently completed a three-week tour of Australia, organized by the Socialist Alliance and Green Left Weekly to introduce his new book, Facing the Anthropocene: Fossil Capitalism and the Crisis of the Earth System. He gave this talk, which draws on material in Chapter 11, at a well-attended May Day Celebration in Cairns, Queensland, on Saturday May 7.

UPDATE, June 2, 2016: The talk Ian gave at the Cairns celebration was abridged from a talk he gave at forums in Perth, Adelaide, Hobart, Brisbane and Newcastle.  The full talk has now been posted in Links Journal of International Socialist Renewal.

(Facing the Anthropocene  can be pre-ordered through many online booksellers. Orders placed now through the Monthly Review Press website will be shipped immediately.) 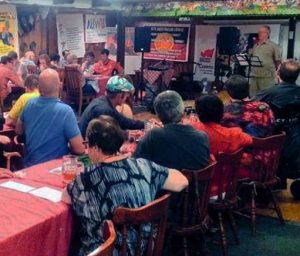 Ian Angus speaking at Cairns May Day celebration, May 7, 2016

WE ARE NOT ALL IN THIS TOGETHER

I’m sure you’ve heard liberal environmentalists insist that we are all passengers on Spaceship Earth, sharing a common fate and a common responsibility for the ship’s safety. Former US vice-president Al Gore, for example, tells us: “We all live on the same planet. We all face the same dangers and opportunities, we share the same responsibility for charting our course into the future.”

In reality, a handful of Spaceship Earth’s passengers travel first-class, in plush air-conditioned cabins with every safety feature, including reserved seats in the very best lifeboats. The majority are herded into steerage, exposed to the elements, with no lifeboats at all. Armed guards keep them in their place.

The first months of 2016 were the hottest on record. According to conservative estimates by climate experts, if business as usual continues, within 50 years the global average temperature will be permanently hotter than at any time since modern humans evolved, 160,000 years ago.

But climate extremes aren’t the only records that are being broken.

Twenty-first century capitalism is also characterized not just by inequality—that’s always been a feature of class society—but by gross inequality, an unparalleled accumulation of wealth in the hands of a very few, coupled with mass poverty that is enforced by all the economic, political, and military resources the ultra-rich can muster.

Many studies, articles, and reports have documented the disproportionate wealth at the top. Rather than overwhelm you with a long list of appalling statistics I will just cite two.

Branko Milankovic, the former lead economist at the World Bank, is one of the world’s leading authorities on economic inequality. He says bluntly that we are now experiencing the highest level of relative and absolute global inequality at any point in human history.

So the 21st century is being defined by a combination of record-breaking inequality with record-breaking climate change. That combination is already having disastrous impacts on the majority of the world’s people. The line is not only between rich and poor, or comfort and poverty: it is a line between survival and death.

Climate change and extreme weather events are not devastating a random selection of human beings from all walks of life. There are no billionaires among the dead, no corporate executives living in shelters, no stockbrokers watching their children die of malnutrition. Overwhelmingly, the victims are poor and disadvantaged. Globally, 99 percent of weather disaster casualties are in developing countries, and 75 percent of them are women.

The pattern repeats at every scale. Globally, the South suffers far more than the North. Within the South, the very poorest countries, mostly in Africa south of the Sahara, are hit hardest. Within each country, the poorest people—women, children, and the elderly—are most likely to lose their homes and livelihoods from climate change, and most likely to die.

The same pattern occurs in the North. Despite the rich countries’ overall wealth, when hurricanes and heatwaves hit, the poorest neighborhoods are hit hardest, and within those neighborhoods the primary victims are the poorest people.

Chronic hunger, already a severe problem in much of the world, will be made worse by climate change. As Oxfam reports: “The world’s most food-insecure regions will be hit hardest of all.”

Unchecked climate change will lock the world’s poorest people in a downward spiral, leaving hundreds of millions facing malnutrition, water scarcity, ecological threats, and loss of livelihood. Children will be among the primary victims, and the effects will last for lifetimes: studies in Ethiopia, Kenya, and Niger show that being born in a drought year increases a child’s chances of being irreversibly stunted by 41 to 72 percent.

In 1980, the English historian and antiwar activist Edward Thompson proposed the word exterminism for “those characteristics of a society—expressed, in differing degrees, within its economy, its polity and its ideology—which thrust it in a direction whose outcome must be the extermination of multitudes.”

We see exterminism in action today, when untold thousands of people from the Middle East and Africa have drowned in desperate attempts to reach Europe, and those who reach the far shore are imprisoned and driven back, in violation of international law. The European Union has turned the Mediterranean into a mass grave, and its southern coastlands into concentration camps.

Governments that follow such policies say that they want to help people adapt so they can stay in their home countries, but their actions belie their words. A case in point is the Green Climate Fund, set up at the UN climate conference in Cancun in 2010. The rich countries promised to provide $100 billion a year, to assist Third World nations in adapting to climate change.

That was six years ago. By March of this year, the Fund had actually received only 7% of the money required for just one year. Even if all the promised pledges are actually delivered, the total fund will still be 90% short of its first year requirement. As India’s representative on the Green Climate Fund Board said, “At this pace we will not be able to do anything much.”

That’s not to say the rich countries aren’t spending money to deal with climate change in the Third World—they’re just spending it in other ways. The European Union, which has pledged 1.8 billion euros in aid to Africa, has budgeted over six times that much for carrying out deportations. I don’t know what Australia’s budget is for excluding and imprisoning refugees, but it is clearly following Europe’s lead.

Christian Parenti calls this the politics of the armed lifeboat—“responding to climate change by arming, excluding, forgetting, repressing, policing and killing.” It is a major element of the climate-change policies of wealthy countries today. It is certainly the best-financed part.

In 1844, Frederick Engels described how the streets of Manchester were carefully laid out so that rich didn’t have to come into contact with the poor or see the slums they lived in.

“The money aristocracy can take the shortest road through the middle of all the labouring districts to their places of business, without ever seeing that they are in the midst of the grimy misery that lurks to the right and the left.”

Today, that physical separation is global. What Archbishop Tutu calls “adaptation apartheid” is business as usual.

While the military targets climate-change victims as enemies of the capitalist way of life, global elites are preparing for dark times by creating protected spaces for themselves, their families, and their servants in the hope of ensuring that they continue to get more than their share of the world’s wealth, no matter what happens to anyone else.

Long ago, Karl Marx wrote that

“Capitalist accumulation constantly produces . . . a population which is superfluous to capital’s average requirements for its own valorization, and is therefore a surplus population.”

As capital expands, Marx said, “the entanglement of all peoples in the net of the world market,” creates an ever-growing global divide between rich and poor.

“Along with the constant decrease in the number of capitalist magnates, who usurp and monopolize all the advantages of this process of transformation, the mass of misery, oppression, slavery, degradation and exploitation grows.”

When I was in university, my economics professors insisted that Marx was wrong, that capitalism was improving life for everyone. But what we see today goes beyond the horrors that Marx described. On one hand, ever-increasing wealth concentrated in the hands of the tiny billionaire class. On the other, an increasingly large proportion of the population has been made not just “relatively redundant” but absolutely surplus to capitalism’s profit-making requirements. They aren’t needed as producers or consumers, and few of them ever will be. So they can be – and are – abandoned.

Hundreds of millions have already been pushed to the outer edges of the global economy and beyond, denied access to the minimum requirements of life, and left to survive the deteriorating global environment on their own. Excluded from the fossil economy, they have become its primary victims.

If this continues, the 21st Century will be a new dark age of luxury for a few and barbaric suffering for most. That’s why the masthead of Climate & Capitalism, the web journal I edit, carries a slogan adapted from Rosa Luxemburg’s famous call for resistance to the First World War: “Ecosocialism or barbarism: There is no third way.”

I’d like to finish by quoting an Australian activist some of you may have known, Del Weston. Her tragic death four years ago robbed Australia and the world of an outstanding ecological Marxist scholar. In the final paragraphs of her brilliant book, The Political Economy of Global Warming, Del wrote

“We can choose to fiddle while the globe burns, to be afraid to be called alarmists, to be secure in the knowledge that we in the West will not be so  immediately and devastatingly affected by global warming. That however would leave us morally bankrupt and living in a sea of chaos on a stricken planet.”

But, she wrote, we still have a small window for action “to change the disastrous trajectory we are on.” We must she said, devote ourselves to

“Building new political, economic and cultural systems and societies that are metabolically restorative, equitable, resilient, just, diverse and democratic. It is a challenge that could bring the different peoples of the world together, to build something better together and make history for the benefit of all people. We cannot afford not to try, nor to fail.”

I could not agree more.