A forgotten comment by a noted Marxist, on our collective responsibility to preserve natural wealth so that future generations can survive and flower.

It’s often said that socialists are latecomers to environmentalism, that until the 1990s, Marxists ignored or rejected the concerns raised by environmentalists. There’s some justice to that criticism, but there were important exceptions.

I recently came across a the following passage in Long Waves of Capitalist Development, a 1980 book based on lectures that the noted Belgian Marxist Ernest Mandel gave at the University of Cambridge in 1978. I haven’t seen it quoted anywhere else.

Whatever weaknesses there may have been in the response of the organized left at the time, it is clear that Mandel was giving careful thought to environmental issues: this remarkable passage could easily be included in a 21st century statement of ecosocialist views and aims, without change. 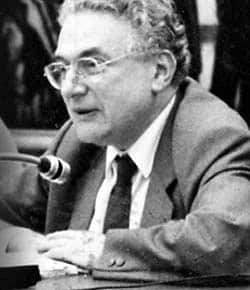 We socialists and Marxists do not share the irresponsible “productivist” credo of the 1950s and 1960s. Many social criticisms of that credo are amply justified.

One has not necessarily to accept the predictions of unavoidable absolute scarcity of energy and raw materials of the Club of Rome type in order to understand that there is a collective responsibility for the present generation of humanity to transmit to future generations an environment and a stock of natural wealth that constitute the necessary precondition for the survival and flowering of human civilization.

Neither has one to accept the impoverishing implications of permanent asceticism and austerity, so alien to the basic spirit of Marxism, which is one of enjoyment of life and infinite enrichment of human potentialities, in order to understand that the endlessly growing output of an endless variety of more and more useless commodities (increasingly, outright harmful commodities, harmful both to the environment and to the healthy development of the individual) does not correspond to a socialist ideal.

Such an output simply expresses the needs and greeds of capital to realize bigger and bigger amounts of surplus value, embodied in an endlessly growing mountain of commodities.

But the rejection of the capitalist consumption pattern, combined with a no less resolute rejection of capitalist technology, should base itself from a socialist point of view on a vigorous struggle for alternative technologies that will extend, not restrict, the emancipatory potential of machinery (i.e., the possibility of freeing all human beings from the burden of mechanical, mutilating, non-creative labor, of facilitating rich development of the human personality for all individuals on the basis of satisfaction of all their basic material needs).

We are convinced that once that satisfaction is assured in a society where the incentives for personal enrichment, greed, and competitive behavior are withering away, further “growth” will be centered around needs of “nonmaterial” production, (i.e., the development of richer social relations). Moral and psychological needs will supersede the tendency to acquire and accumulate more material goods.

However “impopular” these beliefs may appear in the light of present-day fashions, we believe in the growing capacities of human intelligence, human science, human progress, human self-realization (including self-control), and human freedom, without in any way subordinating the defense of such freedoms (in the first place, freedom from want, but also freedom of thought, of creation, of political and social action) to any paternalistic instance supposedly capable of securing them for mankind.