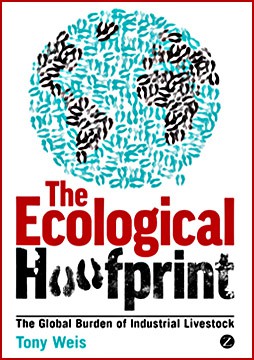 The rapid expansion of world meat consumption is (1) an indication that more people are getting better fed, right? This “nutritional transition” is (2) great news for human health, right? And (3), notwithstanding issues of excessive cruelty to animals, industrial meat production is just a high-tech version of what humans have been doing since they started hunting, right?

Weis demolishes justifications for the global process he calls “meatification” with a rigorous analysis of how it exacerbates inequality, and widens the rift between capitalist economies and the natural environment. It’s damaging and unsustainable. At a time when academics are forced to focus more and more narrowly, he looks at the big picture.

On question (1) – who benefits from growing meat consumption – Weis unpacks the extent of inequalities: people in rich countries consume more than three times as much meat, and more than four times as much dairy, as people in developing countries (see table). 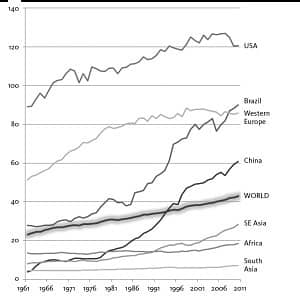 At one extreme is the USA (121 kg of meat per person per year), Australia (113 kg), Argentina (104 kg), Canada (99 kg) and western Europe (86 kg). In 2010 these countries, with 12% of the world’s population, consumed nearly one third of meat – despite the way that per capita consumption, and therefore the proportion of all meat consumed, has rocketed in both China and Brazil over the last forty years. At the other extreme, southeast Asia (23 kg per person per year), South Asia (18 kg) and Africa (7 kg), which together account for a little under half the world population, consumed 16% of the meat (p. 84).

Those numbers are only part of the picture: there are vast differences in consumption levels within each country.

But this is not just about consumption statistics. The historical development of the “industrial grain-oilseed-livestock complex,” as Weis calls it, has turned over vast resources to producing meat for the rich, at the expense of producing food for the poor.

He tells the history of livestock production, arguing that the key driver in the twentieth century was chronic grain surpluses produced by US farmers. These were cycled through “fast-rising populations of concentrated livestock” (p. 73). “Roughly two-thirds of the incredible boom in grain production […] in the USA and Europe between 1950 and 1985 went into animal feed.” Next came the “explosive” growth of industrial oilseed production.

The international food system that developed around these imperatives also produced rising flows of cheap grain imports for poor countries. This helped to sustain rapid population growth – but simultaneously ruined their farmers and wrecked food self-sufficiency. In the 1980s and 1990s the World Bank’s structural adjustment programmes exacerbated poor countries’ dependence on these global markets. (And today, the clashes continue: the World Trade Organisation talks on trade rules were teetering on the brink this summer because India was insisting that food subsidies and stockpiles be exempted.)

The use of about one third of the world’s crop land to grow maize, soybeans and other animal feedstuffs is integral to this unequal food system, Weis argues, picking up a theme highlighted by Frances Moore Lappé in Diet for a Small Planet.

Despite efforts to reduce wastage, this amounts to a “reverse protein factory” – that is, “cycling humanly edible grains and oilseeds through animals to produce flesh, eggs and milk destroys much more protein and other usable plant nutrition than it contributes to human societies” (p. 111). 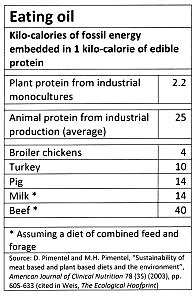 One way of maximizing nutritional output per land area, Weis argues, would be to stop funneling resources down this “net nutritional drain” (p. 148).

This waste “can not be trumped by the nutritional ‘mythology’ of animal protein”, Weis argues with respect to question (2), about the much-vaunted triumphs of the “nutritional transition” (p. 75). He questions these, citing, on one hand, the growing body of opinion among nutritionists about the importance of plant-based foods for balanced diets, and, on the other, the epidemic of “diseases of affluence” such as obesity caused partly by excessive consumption of meat and meat products in rich countries.

Weis is at his most trenchant on question (3), about whether the industrial food system is a logical continuation of previous relations between people and nature. He argues against “the pretence that industrial livestock production is anything like a mere technological amplification of age-old interrelations” between humans, animals and the natural environment (p. 131).

Industrial livestock overburdens land: a given amount of usable nutrition can “always be obtained from much less cultivated land” if crops are directly consumed, instead of being cycled through livestock to produce meat. And the more land used for grain and oilseed monocultures – much of which goes to feed livestock, not humans directly – the greater the ecological burden of industrial fertilisers, pesticides and other persisted toxins.

Industrial livestock is a disproportionate burden on water on freshwater resources, and accounts for almost one fifth of all anthropogenic greenhouse gas emissions.

That’s not all. Weis describes the vicious circle into which industrial agriculture has entered by repeatedly applying external inputs – fertilisers, pesticides, technological fixes to hike crop yields – in a vain attempt to escape its problems. These “biophysical overrides,” he argues (p. 104), “not only fail to resolve the basic contradictions necessitating their use, which makes them like a treadmill, but over time can serve to make problems much worse.” The treadmill speeds up.

Science and technology can not resolve the biophysical contradictions of a system where “incessant growth and accumulation” are the motive force (p. 146). Humanity needs to break from this “pathological economic logic,” Weis argues; then, “productivity would be delinked from resource-intensive machinery and overrides.”

Effective farming would halt the “major vector of inequality, degradation and violence” that industrial livestock production has become. It would be “much more labour- and knowledge-intensive”: it would use fewer external inputs, be more biologically diverse, cultivate multiple crops, manage natural controls on pests and strive to enhance soil biota.

“An ecologically rational conception of efficiency thus turns a basic tenet of modernization on its head: rather than technology displacing labor in large monocultures, there is a need for labor and knowledge to displace mechanization.”

Weis favors a reduction in meat consumption as a social and ecological imperative, not a moral one.

“Should people in rich countries aim to reduce their per capita annual consumption of meat (~80-120 kg) to the world average (~42 kg in 2010)? Is the current average across most of the global south (well under 30 kg) a better, and fairer, target?”

He refrains from answering this question, arguing that his analysis of industrial farming “can’t settle intense debates about whether people should eat some but less meat, none, or no animal products at all” (p. 153).

What the analysis does show, he concludes, is that “the ethical dilemmas and responsibilities bound up in millennia of co-evolution [with other species] are being obliterated by the imperatives of industrial capitalism and the violence of commodification.”

For those seeking a socialist view of industrial agriculture – as opposed to Malthusian ones – this short, readable and thoroughly researched book is a great place to start.

Review reposted, with permission, from People and Nature