50 years ago, Barry Commoner explained why rising levels of carbon dioxide in the air could lead to disaster 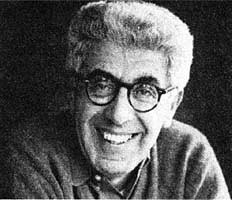 One of the delights of editing Climate & Capitalism is the willingness of readers to share their knowledge — and of course to correct me, politely but firmly, when I get something wrong.

Last week I posted a passage written in 1964, in which Murray Bookchin warned of the danger of global warming caused by CO2 emissions. That was a great quote, but I overstepped myself by saying that 1964 was “many years before anyone else on the left … even realized that global warming might be a concern.”

A knowledgeable reader quickly pointed out that the socialist environmentalist Barry Commoner raised concerns about global warming at almost the same time. Here’s what Commoner wrote in the 1966 edition of his book Science and Survival:

“Fire, an ancient friend, has become a man-made threat to the environment through the sheer quantity of the waste it produces. Each ton of wood, coal, petroleum, or natural gas burned contributes several tons of carbon dioxide to the earth’s atmosphere. Between 1860 and 1960 the combustion of fuels added nearly 14 percent to the carbon-dioxide content of the air, which had until then remained constant for many centuries. Carbon dioxide plays an important role in regulating the temperature of the earth because of the ‘greenhouse effect.’ Both glass and carbon dioxide tend to pass visible light but absorb infrared rays. This explains why the sun so easily warms a greenhouse on a winter day. Light from the sun enters through the  greenhouse glass. Within, it is absorbed by soil and plants and converted to infrared heat energy which remains trapped inside the greenhouse because it cannot pass out again through glass. Carbon dioxide makes a huge greenhouse of the earth allowing sunlight to reach the earth’s surface but limiting reradiation of the resulting heat into space. The temperature of the earth — which profoundly affects the suitability of the environment for life — is therefore certain to rise as the amount of carbon dioxide in the air increases.

“A report by the President’s Science Advisory Committee finds that the extra heat due to fuel-produced carbon dioxide accumulated in the air by the year 2000 might be sufficient  to melt the Antarctic ice cap — in 4000 years according to one computation, or in 400 years according to another. And the report states:  ‘The melting of the Antarctic ice cap would raise sea level by 400 feet. If 1,000 years were required to melt the ice cap, the sea level would rise about 4 feet every 10 years, 40 feet per century.’ This would result in catastrophe for much of the world’s inhabited land and many of its major cities.”

And later in the same book:

“And suppose that, as it may, the accumulation of carbon dioxide begins to threaten the entire globe with catastrophic floods. Control of this danger would require the modification, throughout the world, of domestic furnaces and industrial combustion plants…. Solar power and other techniques for the production of electrical power which do not require either combustion or nuclear reactors, may be the best solution.”

The report Commoner mentions was Restoring the Quality of Our Environment, prepared for President Lyndon Johnson by fifteen scientists who comprised the Environmental Pollution Panel of the President’s Science Advisory Committee. Their 300-page account of environmental concerns was published by the White House in November 1965. The section on Atmospheric Carbon Dioxide summarized the state of scientific knowledge about greenhouse gases and global warming. As we now know, they were much too optimistic about how long it will take the Antarctic to melt.

For readers interested in the history of climate change science, here’s a scan of that section of the 1965 report (PDF 1.6KB).

What this report  shows is that there was considerable scientific concern about global warming in the mid-1960s, so it’s not surprising that radical environmentalists like Bookchin and Commoner raised the alarm. Perhaps other readers can explain why the subject seems to have largely disappeared from public discussion in the 1970s and 1980s.