Ian Angus reviews ‘The Bet,’ an in-depth account of the overhyped and pointless wager between populationist Paul Ehrlich and libertarian Julian Simon. 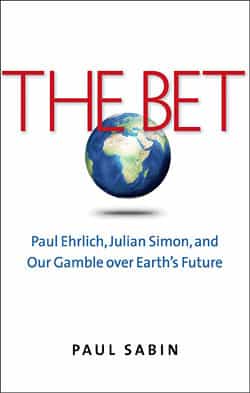 The Bet is a carefully researched and very readable account of a pointless wager. The bet itself proved nothing and the bettors learned nothing from the experience.

On one side, biologist Paul Ehrlich, author of The Population Bomb. The biology professor became a green icon by telling liberal environmentalists what they wanted to believe – that there was no need for fundamental social and economic change, because the root cause of resource shortages and environmental decay was overpopulation, especially in other countries — poor countries, of course. If birth rates weren’t drastically reduced – Ehrlich was pessimistic – Mother Nature would solve the environmental crisis through mass famine, killing off those excess people who shouldn’t have been born in the first place.

On the other side, Julian Simon, author of The Ultimate Resource. The business school professor became a Reagan-era idol by telling conservatives what they wanted to believe – that there was no need to worry about the environment because the magic of free markets will solve all problems and bring prosperity to everyone. Rising population was a “sign of success of human civilization.” In Simon’s vision, there were no limits to growth – resources were essentially unlimited, and any remaining concerns would be solved by profit-motivated ingenuity, if only governments would stop interfering.

So, Simon said, pick any five raw materials and let’s see what happens to their combined market price in the coming decade. I bet the price will fall.

Ehrlich took the bet, choosing $1000 worth ($200 each) of five metals: chromium, copper, nickel, tin and tungsten. If the combined price of those essential resources rose over 10 years, Simon would pay Ehrlich the difference. If it fell, Ehrlich would pay Simon.

As Paul Sabin writes in The Bet, money wasn’t the issue: “For both sides, the real winnings would be bragging rights and the chance to prove that they were right about the future course of history.”

Ten years later, in October 1990, Ehrlich sent Simon a cheque for $576.07. The combined price of the five minerals had fallen by nearly 50%. Simon had won his bragging rights, and conservatives quickly claimed that the bet proved “cornucopian claims that the supply of resources is becoming more abundant, not more scarce.”

Really, it proved no such thing – nor would Ehrlich’s position have been confirmed if prices had gone the other way. As anyone who has followed the ups and downs of crude oil prices knows, commodity prices fluctuate in response to a host of competing short-term forces — whether they will be up or down on some specific day ten years from now is largely a matter of chance.  Simon’s willingness to stake his reputation on such a bet, and Ehrlich’s eagerness to accept it, only show how poorly both understood the realities of 20th century capitalism.

Most of The Bet is an entertaining and well-documented account of the processes by which Ehrlich and Simon came to their respective positions and then came into conflict. In that respect it is a valuable addition to our knowledge of the history of 20th century environmentalism.

Unfortunately, Sabin makes no serious attempt to evaluate the two positions. Instead his final chapters resort to the laziest of journalistic clichés, the vacuous assertion that polarized debates are always bad and the truth always lies somewhere between the extremes.

But panglossian faith in unfettered capitalism and obsession with population growth aren’t two poles in a simplistic bi-polar debate: they are false views of a complex reality. A compromise between two errors is still wrong.

The socialist environmentalist Barry Commoner, who Sabin discusses briefly and then ignores, offered a much more insightful and nuanced approach, showing that the problem isn’t that capitalism needs to grow more  (Simon), or that capitalism has grown too much (Ehrlich), but the very nature of capitalism. His analysis offers a clear alternative to the false choice posed by a wager that was over-hyped and ultimately meaningless.