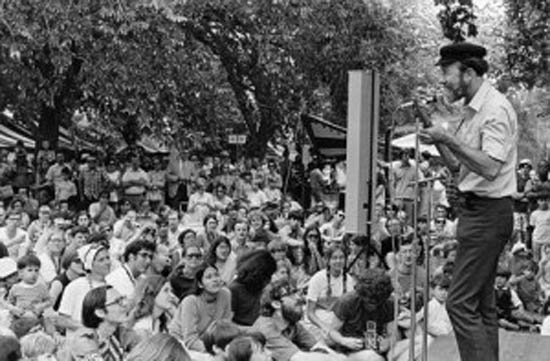 The late Pete Seeger, a folk singer and left wing icon – seen in the photo performing at the Washington Monument on the first Earth Day in 1970 – wrote a song for Paul Ehrlich’s Zero Population Growth organisation (“We’ll All Be A-Doubling”, 1969). Seeger publicly appealed to Ehrlich and Barry Commoner to sink their differences in pursuit of environmentalist aims. “Commoner has convinced me that technology and our private profit politics and society must be radically changed and quickly,” wrote Seeger. “But I’m still working hard for Zero Population Growth. … Achieving ZPG will be good education for everyone. Everyone can and must cooperate.”[6] Seeger’s sympathy for Ehrlich’s aggressively Malthusian arguments is a reminder of how deeply these ideas were embraced not only by the right, but also by sections of the left.

THE IDEOLOGUE WHO TRIED TO MAKE
ENVIRONMENTALISM MEAN POPULATION CONTROL

It was the Indian food crisis of the mid 1960s that turned the biologist Paul Ehrlich from a field researcher on butterflies into one of the USA’s most vocal environmentalists and population control advocates.

Ehrlich published his best-seller The Population Bomb – which warned that “mankind will breed itself into oblivion” and called for “radical surgery” to excise the “cancer” of population growth – in the summer of 1968.

The American elite was receptive to Ehrlich’s “grim predictions about the future”, Paul Sabin writes in The Bet. That year, violent revolt swept through American cities; the USA was mired in the Vietnam war and faced opposition to it at home; and student and worker protests swept through the rich countries and culminated in the French general strike.

Ehrlich became a media superstar, doing more than 100 public lectures and 200 radio and TV shows in 1970 alone. The Population Bomb was reprinted 22 times in three years. In the introduction, Ehrlich explained that he had “understood the population explosion intellectually for a long time”, but that his tour of India in the summer of 1965 – during one of the subcontinent’s periodic food supply crises – had brought it home emotionally. One “stinking hot night”, he wrote,

“My wife and daughter and I were returning to our hotel in an ancient taxi. The seats were hopping with fleas. The only functional gear was third. As we crawled through the city, we entered a crowded slum area. The temperature was well over 100 and the air was a haze of dust and smoke. The streets seemed alive with people. People eating, people watching, people sleeping. People visiting, arguing and screaming. People thrusting their hands through the taxi window, begging. People defecating and urinating. People clinging to buses. People herding animals. People, people, people, people.”

Sabin argues that Ehrlich’s “revulsion” at India’s street life was “common for western visitors”. But his instinct to blame “the sheer number of people” reflected a shift in emphasis in western thinking (The Bet, p. 22).

The Bet describes the impact on American elite opinion and government policy in the 1970s and 1980s of Ehrlich’s neo-Malthusian[1] population control ideas on one side, and the “cornucopian” vision of the economist Julian Simon on the other. It brings home how strongly mainstream environmentalism was permeated by Ehrlich’s profoundly anti-human dogma.

Ehrlich argued that the concerns of 1970s American environmentalism – industrial and urban pollution and the soaring use of pesticides such as DDT and manufactured fertilisers in agriculture – could be attributed chiefly to growing population. He was a key speaker at the first Earth Day in April 1970, the event said to have marked the birth of environmentalism as a significant political force and that was followed by the establishment of the Environmental Protection Agency as a strong federal regulator (p. 49).

Ehrlich also influenced research on sustainability, an essential intellectual strand of environmentalism, with his IPAT equation ([environmental] impact = population x affluence x technology). His belief that “ecological laws” could be applied to the development of human society, that “humans were a species like any other, subject to the same constraints” (p. 83) was shared by some of the authors of the Club of Rome’s Limits to Growth report, a modelling exercise that sought to forecast the point at which human society and its economy would come up against natural limits.

Zero Population Growth, the organisation set up in 1968 on Ehrlich’s initiative, won sympathy from sections of the political left as well as the right. Ehrlich believed that Americans “consumed so much that each American born had a disproportionate impact on resource consumption”, and that “if the nation wished to promote population limits overseas, it had to get its own house in order” (The Bet, p. 36).

Sabin shows that the issue of coercive population control, and its eugenicist and racist overtones, were never far from Ehrlich’s political initiatives. Governments had to “undertake the task of regulating the population size just as they now attempt to regulate economies”, Ehrlich said in 1969. While Zero Population Growth’s executives soon realised that openly advocating coercive population control would make the group unpopular, Ehrlich “stubbornly defended the idea that dire circumstances could justify drastic action” (p. 41).

Sabin recounts how Ecoscience, a textbook published by Ehrlich and his colleagues in 1977, “considered – without endorsing – inflammatory ideas such as marketable licences for children and mass sterilisation campaigns”.

Ehrlich denounced his Stanford colleague William Shockley, who openly espoused eugenicist and racist views. But Ehrlich’s zealous campaigning first for birth control and then for immigration control drew fierce opposition from African American groups and sections of the left. He advocated policies that would hit poor mothers, such as taxes on nappies, baby bottles and baby foods. Critics “continued to denounce population control, and Ehrlich personally, as racist and anti-poor for focusing on controlling births and immigration” (p. 117).

The Bet’s narrative is framed around the public battle in the US elite between the Ehrlich and environmental “pessimists” on one hand, and Julian Simon and other “cornucopian” economists on the other. Simon denounced the idea that natural resources are finite and that humanity is approaching ecological limits, and claimed that markets would always drive enterpreneurs to solve resources problems with technological ingenuity (p. 153).

The bet referred to in Sabin’s title was struck between Ehrlich and Simon over the price of metals. Ehrlich said that between 1980 and 1990 selected metals (copper, chromium, nickel, tin and tungsten) would become scarce, along with all other resources, and that their prices would rise; Simon said that markets and technology would uncover new reserves and that prices would fall. Sabin describes not only how Simon won the bet (the metals prices were on average lower in 1990 than in 1980), but also how his “cornucopian” vision won the day in American government. When Ronald Reagan succeeded James Carter as president in 1981, a sustained attack on all forms of environmental regulation followed.

Sabin’s book effectively dissects the relationship between academic arguments and the political processes in the American establishment. It is well researched and written in a refreshingly accessible manner.

The substantial problem with it, in my view, is that by framing the issues as it does – “pessimist” environmentalists versus “cornucopian” economists – it pushes into the background another battle, between the neo-Malthusian population control advocates on one side, and environmentalists who sought to place pollution and other environmental problems in the context of a critique of capitalist social relations on the other.

This dispute was epitomised by Ehrlich’s polemical clash with Barry Commoner in 1970-72. Commoner, a plant physiologist at the University of Washington, lambasted Ehrlich and the biologist Garret Hardin for their Malthusian calls for population control, and argued that resources problems could be solved “if development were based on ecologically sound technologies of production”, and if it were directed at the elimination of poverty.

But Commoner also hit Ehrlich at his supposed strong point: Ehrlich’s assertion that the relationship between population growth and environmental impact could be measured scientifically. Commoner surveyed a number of types of pollution and showed, first, that among the three factors identified by Ehrlich – population, technology and affluence – it was technology that accounted for the lion’s share of environmental impacts.

Commoner looked at such key environmental impacts as those from electricity generation, nitrogen fertiliser manufacture and chemical wastes. But perhaps his most memorable example was the introduction of the non-returnable beer bottle, which meant that in the USA between 1950 and 1967, population rose by 30%, beer consumption per capita rose by 5% and the number of bottles used per unit of beer shipped rose by 408%. It was the new bottles that strained resources far more than the increase in population or in the amount of beer being consumed. The most serious problem, Commoner argued, was not population growth – as Ehrlich was loudly and publicly insisting – nor rising consumption, but the misuse of technology.[2]

When Commoner started his research on the relative importance of different causes of environmental impact, Ehrlich tried to persuade him to keep quiet about the results, in order not to obstruct the campaign for population control. Commoner rejected this indignantly, and a bad-tempered battle followed. Unfortunately both Sabin in The Bet and Michael Egan, in his biography of Commoner,[3] focus more on their personality clash than on the substantial issues. (“The fight […] grew increasingly personal as the two proud scientists lambasted each other in print and in public forums”, Sabin writes (p. 56).)

I think Commoner’s critique is worth returning to. Here, for example, is his riposte to a doom-laden soundbite in which Ehrlich had warned that population growth meant the end of civilisation was imminent:

“To put the difference between us more bluntly. […] Ehrlich’s advice is to “look after yourself and your friends and enjoy what little time you have left”. While I believe that, today and into the future, human society (as distinct from “yourself and your friends”) can be organised as a stable, ongoing, humane civilisation – by powerful, sustained social action to remove the economic and political barriers that keep people and whole nations in poverty.”[4]

That sounds to me like one of the starting-points for a genuinely human, socialist approach to natural resources and how societies consume them. In response to the 2012 “Rio+20” debates – on the world’s governments’ failure to address the resource crises highlighted by the Earth Summit in Rio in 1992 – Ehrlich and his colleagues proposed a modified Malthusianism, that acknowledged wealth gaps but focused on population as the cause of the problem. (See a People & Nature article here.) Other mainstream environmentalists, flummoxed by the failure of government policies on issues such as global warming, are again talking about population control.[5] Answers to such dead-end anti-humanism are sorely needed.

Reposted by permission. Gabriel Levy maintains the blog People and Nature, where this review was first published.  The Bet has also been reviewed by C&C editor Ian Angus.