Book Review: Capitalism is responsible for a class-based genocide that targets the poor, particularly in the global south 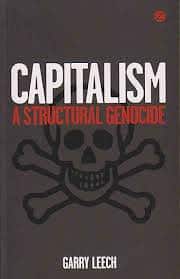 No one denies that terrible things happen in the world, but the standard response of liberals and conservatives is that famine, plague, and war are natural problems that can never be eliminated. Human suffering is tragic, but unavoidable. The poor – and the sick, and the hungry, and the prematurely dead – will always be with us.

Garry Leech disagrees. In Capitalism: A Structural Genocide, he argues that “structural violence [is] inherent in the capitalist system” and that “it results in death on a genocidal scale, thereby constituting a class-based genocide that targets the poor, particularly in the global south.”

By structural violence, Leech means damage to humans caused by “the deprivation of people’s basic needs as a result of the existing social structures.” Obvious examples include hunger or disease caused by food and medicine being too expensive or kept off the market for business reasons. When such violence leads to large numbers of deaths, he argues, we must call it structural genocide.

The core of Capitalism: A Structural Genocide is a series of case studies and analyses showing that capitalism by its very nature deprives hundreds of millions of people of the necessities of life. Just one example: every three seconds, a baby dies of preventable disease or hunger – and in the same three seconds, military organizations spend $120,000 on weapons.

The choice to spend money on guns instead of food and medicine is irrational by any humanitarian standard, but it makes perfect sense if the prime directive is to preserve a system based on “an inequality in power and wealth that ensures the interests of capital are prioritized over those of the majority of human beings and nature.”

Leech estimates that over 10 million people are killed every year by capitalism’s structural genocide. His accounts of structural violence in Mexico, India and sub-Saharan Africa are compelling and appalling. No reasonable person can read them without concluding that the system responsible must be ended.

But what’s the alternative? Unlike many books that simply expose social problems, Leech makes a strong case for the socialist alternative – not just in theory, but through a valuable account of the continuing efforts to build “21st century ecosocialism” in Cuba, Venezuela and Bolivia. He is frank about the formidable challenges these countries still face, but he is positive about the efforts they are making to create a social system prioritizes production for use over production for profit.

Powerful as this book is, I’m not persuaded that structural violence and structural genocide are useful additions to the anti-capitalist vocabulary. Most people will interpret them as meaning something less than genuine violence and genocide. That would be a shame, because, as Leech clearly shows, there is nothing unreal about capitalism’s murderous nature.

But that’s a small criticism. Overall, Capitalism: A Structural Genocide is a valuable and insightful book. Buy two: one to read and consult frequently, and another for a friend who still hopes this destructive system can be saved.

This review was first published in Canadian Dimension.