Socialist candidate: We cannot solve the global climate emergency as long as mining, energy and banking remain in the hands of the billionaires and their corporations. 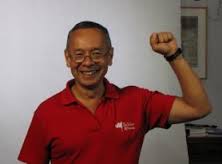 Peter Boyle is a Socialist Alliance candidate in the coming Australian federal election. He gave this talk to a climate change demonstration in Sydney on June 19.

You wouldn’t think from following the discussions in this Parliament behind us – or the Parliament in Canberra – that we are in the midst of a global emergency, would you?

You wouldn’t think that, just last month, the concentration of carbon dioxide in the atmosphere passed over 400 parts per million for the first time in human history – signalling the globe’s dangerous race to catastrophic and irreversible global warming.

They are certainly not acting like we are facing an emergency. Yest we do face an emergency – the greatest global emergency ever in human history.

The world faces an emergency because, over the last century, humans have treated the atmosphere like an open sewer. Industries have pumped pollutants at an ever increasing rate into the atmosphere. US scientist Jim Hansen estimates that humans have discharged enough greenhouse gas to trap extra heat to equal to the energy of 400,000 Hiroshima-scale atomic bombs exploding every day.

Can you imagine this? The extra heat equivalent of 400,000 Hiroshima-scale atomic bombs. It is hard to imagine!

And Australia – as a major fossil fuel exporter – bears a significant responsibility for this.

Two days ago Professor Lesley Hughes of the Climate Commission warned that Australia’s fossil fuels urgently need to be phased out. The fossil fuel reserves in Australia – if extracted and burnt – represent 51 billion tons of greenhouse gases.

And if the world is to avoid catastrophic climate change, she warned, most of these fossil fuels need to be kept in the ground.

Business as usual in completely untenable. This is why the Socialist Alliance is campaigning in this year’s federal election for the nationalisation of the mining, energy and banking industries under the control of the community. We argue that our society needs to do this if it is to carry out the urgently needed transitions to 100% renewable energy and a sustainable and just economy.

But I would argue that you would be wrong in this. The demand for nationalisation of these strategic industries is not coming from any ideological position.

We need to take these industries out of the hands of the big corporations and billionaires who currently own and control it simply because that is absolutely no other way to carry out the urgent transitions we needs to begin now.

You only need to listen to the likes of Gina Rinehart, Clive Palmer and the other billionaires to realise this. Where we see a threat to our common future, they only see trillions of dollars of future profit.

That’s the crazy outlook dictated by the massive concentrations of wealth that these billionaires, the likes of Rio Tinto and BHP Biliton, and the banks represent.

The billionaires want more mining not a rapid phasing out of fossil fuels. They’d sooner spend money on building a replica Titanic or create a new political party with their name on it rather than invest in the transitions we urgently need.

They’d rather invest a billion on another casino on Sydney Harbour to entertain zillionaire “high rollers”.

Those are their priorities but society cannot afford them.

We will not have the urgent transitions that the global climate emergency requires as long as the mining, energy and banking industries remain in the hands of the billionaires and their corporations.

So the need to take these strategic industries out of the hands of the billionaires and their corporations is not driven by any socialist ideology – it is just what is needed.

But I want to admit that the second that part of the message the Socialist Alliance is taking to the federal election does come from our socialist ideology. And this is the part that says these industries need to be placed under the control of the people.

As a socialist I believe in people’s power. I believe we need to build new institutions of truly democratic people’s power to replace the discredited structures of power that we have today.

The current institutions of governmental power are filled – especially at the the top of their various hierarchies – with numerous people tied with chains of silver to the billionaires and their corporations. People like Martin Ferguson who share the perverse Rich White Man Dreaming about Australia having a glorious future as the “new Qatar of gas”.

That is the Rich White Man Dreaming for Australia today. It is ridiculous. It is unsustainable. But it is the dream being pursued by the institutions of power at federal and state levels.

We had a little celebration when Martin Ferguson announced his retirement from federal Parliament – although we all expect that he will soon be offered a new lucrative career on a board table or two from his corporate mates.

Alas there are many more Martin Fergusons. The entire apparatus of government is deeply corrupted and compromised and genetically allergic to democratic control. There’s an army of senior bureaucrats committed to ideology of so-called “economic rationalism” and privatisation.

That’s why in the Parliament behind us, a government elected on the basis of popular anger at the privatising rampage of the previous corrupt NSW ALP government has now put forward a plan to privatise Newcastle port – one of the largest coal export ports in the world. They want to privatise it precisely to make it harder for society to do what it urgently needs to do: phase out coal!

So we need to build new institutions of people’s power – institutions of power that will give our communities much, much more say than a measly “choice” between two entrenched parties for the big corporations once every three years.

As a socialist I deeply believe in the necessity – and the possibility – of people’s power.

People’s power must triumph if we are are to save our common future.