The rich and powerful of the world hated Hugo Chavez because he was symbolic of a threat to the dictatorship of Capital, a figurehead of a continent alive with social movements and millions of people conscious of their political power. 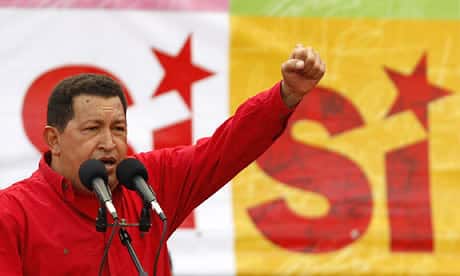 Yes, undefeated. Chavez, no matter how many times the corporate media and the cheerleaders of the status quo call him a dictator, was elected repeatedly with overwhelming majorities.

No matter how many times this slur is moronically or mendaciously repeated, people know the truth. No less than Jimmy Carter certified Venezuela’s elections as amongst the most fair and transparent his organization has ever observed. And the voter turnouts that elected Chavez were usually far, far higher than those in the U.S.

The voices that cheer and mock the death of Hugo Chavez are in fact mocking democracy and the people of Venezuela, who elected him and who have re-elected him time and time again — most recently by a decisive majority in October, 2012.

But today we need not dwell on the disgusting carnival of necrophilia with which the right-wing has followed Chavez’s illness and which will reach a crescendo in the coming days with the news of his untimely demise. This macabre celebration is only the flip side of impotence; they whoop and holler at Chavez’s death from cancer only because they failed to defeat him in life, and could not take down his government by democratic (or other) means.

Besides, behind this grave-dancing is not just the hatred of one man who became emblematic of a continental shift to the left and away from U.S. interests and power; it also reveals the shallow indifference to human life and to democracy built into the whole system. As a friend pointed out, within minutes of announcing the news of his death, CNN was discussing the implications it might have on the markets and on the value of U.S. corporate interests in the region.

Today, I would rather celebrate the majority of Venezuelans — especially the poor and the marginalized. It is, after all, the people who made Chavez, and not the other way around. And it is the humble people of Venezuela who saw to it that Chavez was allowed to complete this many years as president, after all.

Chavez came very close to dying much earlier — of unnatural causes. It was People Power that kept him alive and that kept his democratically elected government in power. I’m referring of course to the April 2002 coup d’etat cynically aided and abbetted by Venezuela’s rabidly right-wing media and which was issued with an immediate stamp of approval by the Bush administration.

It’s important to remember that the traditional elite of Venezuela — the oiligarchs of this South American petrostate who ruled for decades under the ‘Washington Consensus,’ and who quashed resistance to neoliberalism in blood like during the 1989 caracazo — and their allies abroad in the U.S. government and in the corporate boardrooms of the world never intended for Hugo Chavez to live beyond those days in April 2002.

If the people had not mobilized to restore Chavez to power 11 years ago, Latin America would be a much worse place today. The “pink tide” would likely have been largely stemmed before it had a chance to spread; transformations that have begun in Bolivia and Ecuador might never have gotten out of the gates. Who knows, the FTAA, that continental corporate trade deal, might have been implemented rather than soundly defeated. After all, back in 2001, when tens of thousands marched in Quebec City against the early stages of the FTAA, President Chavez was almost alone as a head of government inside the talks opposing the deal.

Whatever the shortcomings and all the very real contradictions of Chavez’s government, the poor of Venezuela and of all Latin America are better off today in real and tangible ways because the people kept it in power.

So let the corporate media say “good riddance!” to Chavez in their cynical way. Ignore them, and watch (or rewatch) the inspiring story of the People Power that defeated the 2002 coup, as told in the powerful Irish documentary The Revolution Will Not Be Televised. The title is a tip of the hat to Gil Scott-Heron, and it’s a reference to the key role that right-wing, private, big media played in orchestrating and manipulating events and their portrayal during the failed attempt at regime change. (Another important source of information about Venezuela is the website Venezuelanalysis.com)

The rich and powerful of the world did not hate Chavez because he was a dictator. Deep down the sentient among them know he wasn’t.

They hated him because he was symbolic of a threat to the dictatorship of Capital, a figurehead of a continent alive with social movements and millions of people conscious of their political power.