A dead-on commentary from FAIR: Fairness in Accuracy and Reporting:

“Chavez invested Venezuela’s oil wealth into social programs including state-run food markets, cash benefits for poor families, free health clinics and education programs. But those gains were meager compared with the spectacular construction projects that oil riches spurred in glittering Middle Eastern cities, including the world’s tallest building in Dubai and plans for branches of the Louvre and Guggenheim museums in Abu Dhabi.”

That’s right: Chavez squandered his nation’s oil money on healthcare, education and nutrition when he could have been building the world’s tallest building or his own branch of the Louvre. What kind of monster has priorities like that? 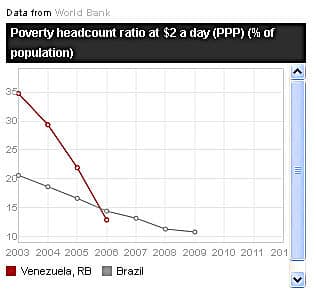 In case you’re curious about what kind of results this kooky agenda had, here’s a chart NACLA, 10/8/12) based on World Bank poverty stats – showing the proportion of Venezuelans living on less than $2 a day falling from 35 percent to 13 percent over three years.

(For comparison purposes, there’s a similar stat for Brazil, which made substantial but less dramatic progress against poverty over the same time period.)

Of course, during this time, the number of Venezuelans living in the world’s tallest building went from 0 percent to 0 percent, while the number of copies of the Mona Lisa remained flat, at none. So you have to say that Chavez’s presidency was overall pretty disappointing – at least by AP’s standards.