The British broadcaster blames poverty and hunger on the overbreeding poor

Last week, British broadcaster and naturalist David Attenborough devoted over a third of a widely reported interview to his claim that human beings are “a plague on the earth.”

Attenborough cited Ethiopia as his only example of the natural world fighting back against the human plague.

“We keep putting on programmes about famine in Ethiopia; that’s what’s happening. Too many people there. They can’t support themselves – and it’s not an inhuman thing to say. It’s the case.”

In Attenborough’s view, Ethiopians are starving simply because there are too many of them. Since they haven’t voluntarily reduced their numbers, the natural world is doing so, by the “natural” method of mass starvation.

But let’s suppose that 50% of Ethiopians disappear today. That would take the country’s population back to its level in the 1980s. If Attenborough’s people-are-the-problem view is correct, hunger should not have been a concern then.

Clearly, reducing population would not make Ethiopia any less vulnerable to mass hunger. 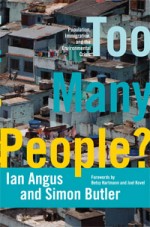 Ethiopia actually produces much more food per person today than it did when the population was much smaller. According to Oxfam, the country is now is “just 2% from being able to supply an adequate level of food energy to all its citizens.”

Despite that, at least thirty million Ethiopians go to bed hungry every night.

The problem isn’t human numbers or food production, it’s an economic and political system that enriches foreign investors and a tiny urban elite, while nearly 80% of the people earn less than $1 a day. There’s lots of food, but they can’t afford to buy it.

Cruel irony: the hungriest people in Ethiopia are farmers. In the past five years, hundreds of thousands have been driven off their land with no compensation, while the government has leased millions of hectares to foreign corporations that raise export crops.

But in Attenborough’s populationist worldview, there are no land grabbers stealing land from subsistence farmers. There is no history of colonial exploitation, slavery, and war, no extreme inequality reinforced by neoliberal policies. There are no international speculators driving up food prices, no agribusiness giants exporting food to richer countries while millions starve. There are just people, and people are a plague.

Yes, there is a plague on the earth, but it isn’t people. It’s a social and economic system that puts profit before people, that treats food as a commodity instead of as a basic human right. So long as that system remains in place, hunger and poverty will continue, no matter what happens to birth rates.

Films about wild animals have made David Attenborough famous. It’s sad and appalling that he uses that fame to promote ignorance about human suffering.

More on the overpopulation myth …
More from my notebook …