The business press slams the lifestyles of Indigenous leaders … and lavishes sycophantic praise on the obscenely super-rich.

The business press slams the lifestyles of Indigenous leaders … and lavishes sycophantic praise on the obscenely super-rich.

by Erika Shaker
Reposted with permission from Behind the Numbers, a blog maintained by the Canadian Centre for Policy Alternatives

Amidst the reluctant media coverage of Idle No More exists a particularly irritating contradiction that centres on how wealth and inequality are examined.

The Occupy movement was roundly criticized by the elite’s media handmaids for going after the 1%. “Why are you punishing ingenuity and hard work,” the 99%ers were asked. “Why are you jealous of people who have ‘made it’?”

After all, success is to be emulated, not vilified. Right?

But tweak the situation — and the target — and the elites (and their mouthpieces) turn into veritable class warriors. In an “eat the rich” kind of way.

Think I’m joking? Witness the scorn heaped on marginalized populations for not going after their own 1% — who are actually situated pretty far down the 99% scale, but who cares about details like that when faced with Chief Theresa Spence’s “exorbitant” $70,000 salary?

Okay, so maybe “eat your rich, but leave ours — and us — alone” is more accurate.

In other words, while Occupy’s “We are the 99%” was criticized for being based on “jealousy,” Idle No More is being slammed for, in effect, not being jealous enough.

It may not be accurate or even consistent, as arguments go. But it sure helps obscure the issues being raised. And the large-scale injustices that these movements are attempting to expose.

It’s a critique that’s not limited to income — it’s about lifestyle and personal finances too. Much is being made of Chief Spence’s car (apparently an Escalade, although I’m unsure if she actually owns one or if it’s urban legend) to try and undermine the principled stand she has taken; currently fasting to call attention to the shameful conditions in which so many Indigenous peoples, including those in Attawapiskat, live.

If only Chief Spence had had access to the Financial Post’s recent piece on 15 frugal billionaires who live like real people. Then perhaps she would have learned some discretion when it came to her personal finances: modelling herself after Mark Zukerberg’s “low key lifestyle” as evidenced by his recent Facebook-funded upgrade to a $7 million Palo Alto home which is “still well below his means.”

Or Azim Premji, chairman of Wipro Limited with a net worth of $12.2 billion, who is so “frugal” he is said to “monitor the number of toilet paper rolls used in Wipro facilities” (which where employees are concerned seems less “frugal” than “fascist”).

Oh, and Amancio Ortego, founder of Zara and worth $57.5 billion, “hasn’t let success go to his head”… except for perhaps one teensy indulgence: a private Bombardier jet that cost $45 million.

That’s how you do frugal, FP-style.

For some, wealth and reality are clearly fluid concepts—as the Financial Post and its comrades in the class struggle illustrate. Take the Wall Street Journal’s helpful infographic on how much Obama’s tax plan would impact a broad cross-section of families in a not-at-all alarmist piece entitled ”How much will your taxes jump?”

It indicates the typical single mom with two kids and her modest $260,000 income will be paying just under $3,400 more in income tax — why, that’s almost half of the average private school’s tuition! And the married couple with four children are clearly stricken by the realization that they will be paying an extra $21,000 in taxes on their how-can-they-possibly-make-it-work $650,000 joint income.

And I do mean “stricken” — did you check out the facial expressions that are situated on the suffering scale somewhere between “my Christian Louboutins are killing me” and “what do you mean they were out of Courvoisier?” with a smidge of “No pony unless you get an A in Calculus this year, Taylor” thrown in for good measure. 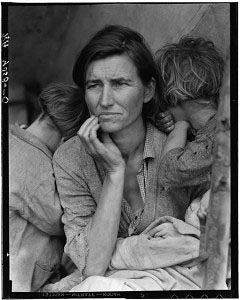 Based on visual representation alone, this infographic is destined to be nearly as iconic a depiction of suffering and hardship as that 1936 photo (“Destitute pea pickers in California; a 32 year old mother of seven children”)—the subject of which, if she were a WSJ reader, clearly could be raking in as much as half a million dollars. You know, all things being equal.

Of course, being a responsible media outlet, the Wall Street Journal did include an infographic for the common folk, indicating what changes to the tax system would mean for the unemployed, students, and low-income families as well as some higher-income earners. It’s not a full-colour illustration and because you can’t link to it you can only find it by scrolling down through the article. But as my colleague Iglika Ivanova pointed out, the WSJ — presumably practising their austerity preaching —couldn’t be bothered to waste precious dollars incorporating colour or facial features into the only illustrations depicting people making under $150,000.

After all, if the poor shouldn’t have luxuries like big screen TVs, why should they qualify for nostrils?

Jonathon Kay’s 2012 piece in Toronto Life describes the lives of equally glum-looking Toronto city dwellers — incomes ranging from $160,000 to $200,000—illustrating through a categorized list of their expenses “the exact meaning of prosperous … depends entirely on one’s perspective.”

As Suzanne Lewis confides, “we have a weakness for designer furniture … In 2010 we spent $5,000 on a table and Eames chairs for our dining room.”

Craig Haynes tries to stay debt-free, but does occasionally splurge … like on that $75,000 motorcycle he bought last year. “People think I make a lot of money,” he laments, “but I lose so much of it in tax.”

Clearly this is about perception, but more to the point, it’s about the perceptions that some people — who can afford them—impose on everyone else to either marginalize the majority of the population, or to sow seeds of division. The people who “matter” — with incomes and lifestyles to match — become the standard by which a “successful” society and the economy are judged. They deserve empathy for their hardship and a tax code that further enriches them … and facial expressions detailed in full colour.

Forget “Undercover Boss” — this is “Undercover Wealthy Folks [lookin’ like the rest of us].” After all, how could you possibly criticize this 1% (in some cases this 0.05%) when they appear so mournful and … ordinary?

Meanwhile, public outrage at an unworkable economic system that continues to marginalize so many of us—and some far more than others — can be directed elsewhere.

At the Theresa Spences of the world. For example.