Coming soon: a new book by Ian Angus and Simon Butler that exposes the fallacies of the “too many people” explanation for the environmental crisis

Is there a taboo against attributing environmental problems to population growth? Are populationist views being suppressed?

Sir David Attenborough thinks so. On March 10, the noted naturalist and broadcaster told a meeting in London that there is a “strange silence … some bizarre taboo” about the population issue. This “absurd taboo” has “a powerful grip on the minds of so many worthy and intelligent people.” Attenborough urged his listeners to “break the taboo,” by raising the population issue whenever and wherever they could.

Who was he talking to? Who were the brave people who dared to listen to a talk on this forbidden topic? Was it some secretive group, hanging on despite all odds, somehow keeping alive the truths that are suppressed by the powers that be?

Far from being a gathering of outsiders, it was a sold-out public meeting organized by Britain’s prestigious and  influential Royal Society of the Arts. Attenborough was delivering the RSA’s annual President’s Lecture, at a meeting hosted and chaired by the RSA President, His Royal Highness the Duke of Edinburgh.

After the large and well-heeled crowd applauded his talk, Attenborough’s remarks were quoted at length in the conservative Daily Mail, Britain’s second most widely-read newspaper. The full text of his talk to the RSA was published a few weeks later in the influential weekly New Statesman, and when that appeared the Daily Mail again gave his comments prominent coverage.

Despite his desire to be seen as a lonely voice in the wilderness, Attenborough spoke as a patron of the influential group Population Matters, formerly Optimum Population Trust. And he wasn’t speaking to a hostile audience: his host the duke, also known as Prince Phillip, once said that he would like to be reincarnated as a deadly virus, “in order to contribute something to solve overpopulation.”

Last year another wealthy group with a similar name, the even more prestigious Royal Society, appointed Attenborough and others who share his views to a special committee to report on “the implications of the changes in global population.”

So much for the taboo. If this is a “strange silence,” no one has told the media.

Attenborough is just one of many populationists – people who attribute environmental and social problems to population growth – who routinely claim that there is a taboo against discussing the population problem. A Google search for web pages containing both “population” and “taboo” returns “about 8,200,000 results.” Not all of those are populationist sites, but a great many are.

It’s truly ironic — populationists, speaking on behalf of large and well-financed organizations, regularly use well-publicized events and the pages of major newspapers and magazines to complain that their views aren’t being heard. Even the producers of a new feature length documentary film on the subject, a film that’s being shown this year at major U.S. film festivals, claim that it “breaks a 40-year taboo by bringing to light an issue that silently fuels our most pressing environmental, humanitarian and social crises — population growth.”

Of course that’s nonsense. No explanation of the environmental crisis gets more exposure than the claim that it is all caused by overpopulation.

The view that really doesn’t get such coverage is the anti-capitalist alternative, the argument that the crisis is caused by a social and economic system that has waste and destruction built into its DNA.

The noted US ecologist Barry Commoner once said that populationist solutions to environmental destruction are equivalent to attempting to save a leaking ship forcing passengers overboard. He said that instead we should ask if there isn’t something radically wrong with the ship.

But people who ask that question – especially if they answer “yes” – aren’t likely to be invited to speak at public meetings hosted at British royalty.

Still, we do what we can to get our views out, through the platforms available to us.

Climate and Capitalism has published many articles on the “population question”, and we’ve been very pleased with the response. Many of them have attracted vigorous debate and discussion, and quite a few have been picked up by other web sites and by print publications. There is obviously a lot of interest in – and a lot of confusion about – the relationship between population, capitalism, and environmental destruction.

Through this experience, we have become very aware of a major gap on the ecosocialist bookshelf. There are many works exposing the fallacies promoted by the grandfather of populationism, Robert Malthus, but he lived 200 years ago – few contemporary populationists have read what he wrote, and even fewer actually support his views. Modern populationism is just as misleading and harmful as traditional Mathusianism, but it relies on different arguments, and it promotes very different social policies.

Despite that, there doesn’t seem to be a clear, popularly written book that exposes and refutes contemporary populationist ideology. There are good academic books on population, but none that we could recommend to green activists who want to understand and reply to populationist arguments.

So last summer I asked Simon Butler, co-editor of the fine Australian newspaper Green Left Weekly, if he would be interested in collaborating on a book that would both answer the principal arguments put forward by populationists in the environmental movement, and present the ecosocialist alternative clearly and concisely. He responded with enthusiasm, so for the last eight months or so we’ve been burning up the Internet with emails and draft chapters.

It’s been a true joint effort – for each chapter, one of us wrote a draft for the other to edit, then drafts went back and forth until we were both satisfied. When we assembled the chapters into a book, both of us edited the entire text many times over. (The editing process was of course complicated by the fact that we live on different continents, with a 14-hour time difference, but somehow it worked.)

We received invaluable input from a number of very knowledgeable people who read the drafts at various stages.  We were very honored when two of them — Betsy Hartmann, author of Reproductive Rights and Wrongs, and Joel Kovel, author of The Enemy of Nature and co-author of The Ecosocialist Manifesto — agreed to write Forewords for the book.

Now the writing is done, and we are pleased to announce that it will be published in September by Haymarket Books. They aim to publish it as an affordable paperback: barring unforeseen inflation, the U.S. price should be under $20.

We plan to formally launch it at the World at a Crossroads: Climate Change Social Change conference that begins on September 30 in Melbourne, Australia, and we expect it to be available in North America and Europe at the same time.

Climate and Capitalism will post more information about the book as publication nears. In particular, we hope that soon we can tell you how to pre-order the book, so that you can be one of the first in your climate justice group to read it. [Update: Pre-order now]

TOO MANY PEOPLE?
Population, Immigration, and the Environmental Crisis
by Ian Angus and Simon Butler 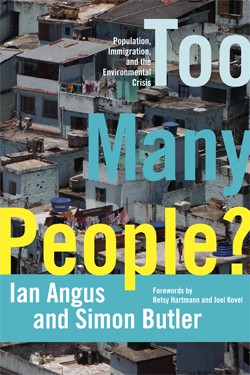 Betsy Hartmann writes: “With clear prose and careful, cogent analysis, Angus and Butler provide the tools necessary to dismantle the myth of overpopulation step by step. In so doing, they also show the way to a more hopeful, justice-centered environmental and reproductive politics. Like the excellent publications they edit, Climate and Capitalism and Green Left Weekly, this book makes complex information, ideas and arguments accessible to a wide variety of readers – activists, students, educators, journalists, policymakers and indeed anyone who wants to better understand the world.”