Supported by the government and the opposition parties, Enbridge is pushing ahead with plans to pipe toxic bitumen through Ontario. First Nations and environmentalists are trying to mobilize public opposition.

Supported by the government and the opposition parties, Enbridge is pushing ahead with plans to pipe toxic bitumen through Ontario. First Nations and environmentalists are trying to mobilize public opposition. 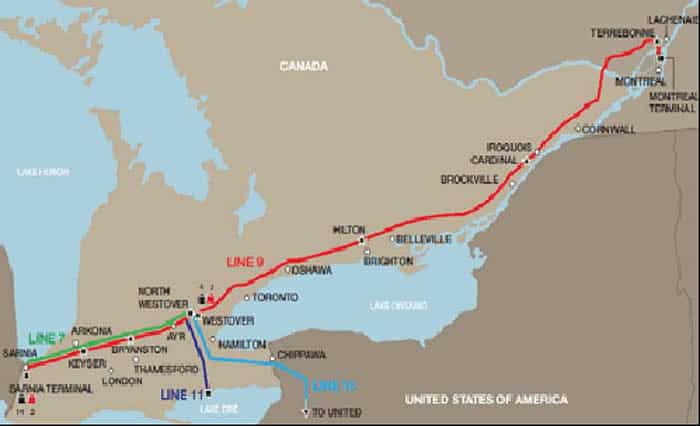 Petroleum giant Enbridge Inc. has taken huge strides in recent weeks to complete its plan to transport tar sands oil to eastern Canada and from there to foreign markets.

Already assured of support from the Harper government, the company is rapidly lining up further backing from provincial politicians and industry players, including a key trade union. And it is fast-tracking the regulatory approval process.

Enbridge’s project entails reversing the flow of an existing pipeline circuit across southern Ontario to Montréal, Quebec and from there through New England states to Portland, Maine. At present imported oil is carried from Portland to Sarnia, Ontario, where existing refineries already process dirty tar sands oil piped from Alberta. Enbridge also plans to increase the pipeline’s capacity from 240,000 barrels per day to 300,000 bpd.

The Enbridge project is of vital importance for Big Oil and its major clients. Imported oil now costs $20 to $30 per barrel more at the world price than Canadian-produced oil. And with massive investments in tar sands operations, the petroleum giants urgently need to gain access to new markets. They face the prospect of declining demand and prices in the United States, the current destination for almost 100 percent of Canada’s oil exports. And plans to build new pipelines to the west coast, from where the oil would be shipped through hazardous coastal waters to Asia, have encountered powerful opposition from communities throughout British Columbia, led by First Nations communities directly in the path of the pipelines.

Enbridge’s eastern pipeline reversal project, originally called “Trailblazer,” aroused widespread opposition from environmental groups in both the U.S. and Canada when it was initiated in 2008. It was officially abandoned in 2009, the company citing “a lack of commercial support.” However, Enbridge then broke Trailblazer into phases, and on July 27 of this year, the National Energy Board of Canada approved Enbridge’s Phase I application to reverse the flow of its Line 9 pipeline between Sarnia and Westover, Ontario, near Toronto.

A separate application is being prepared for the Montréal-Portland phase. And on November 29, Enbridge filed for approval of the Westover-Montréal Phase II. Like the successful application for Phase I, Phase II will no doubt be approved under section 58 of the National Energy Board Act, which exempts the company from the more rigorous environmental and infrastructure standards for new pipelines.

The Line 9 Reversal Phase I hearings established the probable pattern for any subsequent consultations of affected communities on the other phases. As Dave Vasey reported in rabble.ca, September 11,

“To date, First Nation communities have not been properly consulted and community meetings by Enbridge have not been held on reservations.

“Enbridge claims Line 9 has ‘no significant impact to Aboriginal communities’ in its internal assessment, though Line 9 [runs] literally across the street from Amjiwnaang First Nation and runs directly through the Haldimand Tract. Indeed, the Haudenosaunee Development Institute, Aamijiwnaang First Nation and Onieda Nation all submitted concerns to Enbridge and the National Energy Board (NEB) about the project.”

They were ignored by the Board. At a recent Toronto teach-in, First Nations leaders from these and other communities related their concerns about the devastation already suffered by their communities from existing refineries and pipelines. A video of their reports can be viewed here.

The NEB’s July 27 approval of the Phase I reversal came “almost two years to the date after the infamous Enbridge Kalamazoo spill of 20,000 barrels of tar sands dilbit [diluted bitumen] in Michigan,” Dave Vasey notes. “Forebodingly, Enbridge spilled 1000 barrels in Wisconsin the same day as Line 9’s approval. Between 1999 and 2010 Enbridge had 804 spills that dumped 161,000 barrels of oil onto lands and into water.”

Enbridge is not the only company threatening to pipe tar sands oil to Eastern Canada. Enbridge competitor TransCanada Pipeline, which built the existing base Keystone system that delivers Alberta oil to Illinois and Oklahoma, has announced that it is considering conversion of part of its cross-Canada natural gas mainline to carrying the dirty tar sands oil.

These projects give the green light to more and more tar sands expansion, and greater reliance on fossil fuel exploitation. Canada already ranks seventh in the world in oil production. The Harper government’s commitment to tar sands exploitation is notorious; it hopes production levels will double over the next decade. And it has been busy removing any potential obstacles to these plans. A key step was taken earlier this year with the adoption of Bill C-38, a massive budget implementation bill that included 150 pages of changes in environmental regulations, all designed to weaken environmental protections and limit public participation in environmental reviews.

None of the federal parties calls for phasing out tar sands operations. The Greens, with one MP, party leader Elizabeth May, have produced a useful “Comprehensive Guide to the Alberta Oil Sands,” but the party calls only for a moratorium on further expansion.

The official opposition NDP has a similar position, on paper, but also calls for massive expansion in refining and petrochemical manufacturing in Canada. NDP leader Thomas Mulcair attracted much attention this year when he noted the effect of Canada’s energy exports in boosting the value of the Canadian dollar and undermining manufacturing exports (the so-called “Dutch disease”). But Mulcair has signed on to proposals for piping Alberta oil to eastern Canada; in a speech to the Canadian Club of Toronto in September, he said shipping western oil to eastern Canada is a “pro-business, common sense solution” that will create jobs and boost the country’s energy security. And he later told reporters he would not speak against tar sands expansion.

The Ontario Liberal government is onside as well. The province’s Finance minister, Dwight Duncan, told a Calgary business audience September 27 that his government unequivocally backed the oil sands industry. Not surprising, given the alliance of eastern finance with Alberta oil that has replaced the Montréal-Toronto axis with the Toronto-Calgary axis as the business backbone of the country.

In fact, shipping Alberta tar sands products to Eastern Canada is now being posed as a major “national unity” project. This was evident at the meeting of provincial and territorial first ministers in Halifax in late November. Quebec premier Pauline Marois (who had reversed her previous opposition to attending such meetings) met with Alberta premier Alison Redford and announced that her Parti Québécois government will establish a joint working group with the Alberta government to study the possible use of Quebec refineries receiving crude oil from the tar sands. This involves not just Alberta and Quebec alone, said Manitoba’s NDP premier Greg Selinger. “It’s part of a national strategy.”

Only a week earlier, the PQ government’s Environment minister, Daniel Breton, had publicly questioned the role of the federal NEB in authorizing the Enbridge pipeline reversal project: “What the Albertans want to do with their oil, bring it onto our territory without our consent… we’ll have to look at that.” Within days, the Montréal daily La Presse and the Quebec Liberal party opposition were attacking Breton, in unison, among other things for a series of alleged misdemeanours they had dug up from his past, such as a speeding offense, unpaid rents, cheating on unemployment insurance, etc. — some going back 25 years or more! Also riling his critics was a statement by Breton, just days after the September 4 election, praising “the political will of Russia and Venezuela in regard to the nationalization of key sectors of economic development.”

La Presse is owned by Groupe Gesca, a subsidiary of Power Corporation. The latter is also a major shareholder in the French oil company Total, which has invested billions of dollars in the Alberta tar sands. On November 29 — the same day Enbridge filed its Phase II application with the NEB — Breton was forced out of the Quebec cabinet. “Pure coincidence,” said an Enbridge spokesman.

Marois’ agreement with Redford has dismayed environmentalists who had been encouraged by her government’s earlier announcement of a moratorium on shale gas exploration in the St. Lawrence valley, and its decision to close Quebec’s sole nuclear power plant and end asbestos mining in the province. A typical statement was that of Marie-Claude Lemieux, Quebec director of the World Wildlife Fund:

“In the absence of a pan-Canadian energy policy that would reduce our dependence on fossil energies, we ask the Quebec government to demonstrate extreme prudence in regard to pipeline projects on our territory. These projects will lock us even further into an economy based on petroleum, and run counter to Quebec’s greenhouse gas reduction objectives and the climate reality of our planet.”

A common demand is that the government implement a PQ election pledge to have Quebec’s environmental review agency, the BAPE,[1] conduct a full study of the province’s oil and gas industry. During his short mandate as environment minister, Daniel Breton had fired the top officials in the BAPE, known for their Liberal sympathies, and replaced them with more environment-friendly individuals. (In fact, the media campaign against Breton began when he visited the BAPE offices and warned them he would be keeping a close watch on their proceedings.[2])

Despite its initial shale gas decision, the PQ government has since reaffirmed the party’s support for hydrocarbon exploration and development in Quebec. It is currently involved in tripartite negotiations with Ottawa and Newfoundland seeking jurisdiction over drilling rights in the extensive Gulf of St. Lawrence hydrocarbon deposits. It has left the door open to continued shale gas exploration on Anticosti Island and in the Gaspé Peninsula.

In fact, some former leaders of the PQ have a very cosy relationship with Big Oil. Former Premier Lucien Bouchard is the chief lobbyist for the shale gas interests in Quebec. André Boisclair, former Quebec environment minister and PQ leader from 2005 to 2007, is a strategic consultant with clients that include Calgary natural gas producer Questerre Energy. He has just been appointed the Quebec government’s delegate-general in New York City.

It is not hard to explain Marois’ interest in obtaining crude oil from Western Canada. At present, Montréal has only one functioning oil refinery. Two years ago Shell stopped refining crude petroleum at its east-end refinery, which is now being dismantled. Five hundred workers lost their jobs, and Montréal lost $3 million in property tax revenues. The remaining refinery is owned by Suncor, a Calgary-based company that bought Petro-Canada in 2009 for $17 billion. Both Shell and Suncor have complained loudly that Eastern dependence on relatively expensive foreign oil does not produce sufficient profits.

On December 3, Suncor announced plans to spend $55 million to “prepare the Montréal refinery to receive Western crude.” Local politicians greeted the announcement, as did the union representing Suncor’s organized workers, a local of the Communications, Energy and Paperworkers Union (CEP). The CEP also represents many workers in the Alberta tar sands.

As I have reported earlier, the CEP advocates a Canadian nationalist strategy of fighting to keep oil industry jobs in Canada and promoting “Canadian energy security.” It calls for increasing bitumen upgrading and refining capacity in Canada. All of which is consistent with support of the Enbridge project, notwithstanding the union’s professed concern with “environmental sustainability.”

[2] The BAPE is not a quasi-judicial tribunal with decision-making powers. It is purely investigative and consultative, and simply advises the minister.