The international peasant movement denounces the use of the climate negotiations to legitimize business as usual at the expense of humanity and the planet, and rejects false capitalist solutions that will only worsen the climate and food crises.

The international peasant movement denounces the use of the climate negotiations to legitimize business as usual at the expense of humanity and the planet, and rejects false capitalist solutions that will only worsen the climate and food crises. 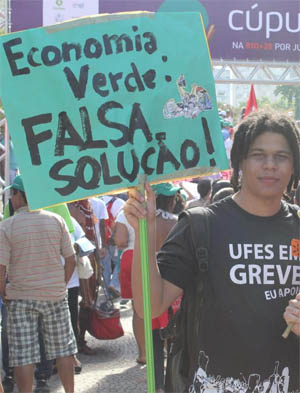 Statement by the international peasant movement La Via Campesina,
December 7, 2012

(Jakarta, 6 December 2012) – As the climate negotiations come to a close, the industrialized countries insist on inaction for the next decade, finding even more ways to escape their historical responsibility, create more carbon markets including one on agriculture and to keep business as usual of burning the planet.

While governments continue to prioritize the interests of industry and agribusiness peasant farmers continue producing to feed the world’s people and the planet.

The high level segment of the 18th Conference of Parties (COP 18) and 8th Meeting of Parties (CMP 8) of the United Nations Framework on Convention on Climate Change (UNFCCC) has begun on December 5 with Ministers arriving in the petro-state of Doha, Qatar. But the almost two week long negotiations has produced absolutely nothing.

Developed countries are so entrenched in their positions and goals for inaction that when the Chair of the negotiations presented the new text under the Long Term Cooperative Action track, the text literally contained blank pages in areas where the Chair claimed divergences existed; these included adaptation, technology development, finance, capacity building and economic and social consequences of response measures – all issues of great concern to developing countries.

On the crucial issue of emissions reductions, commitments proposed by industrialized countries undercut the already low figures proposed in 2009 in Copenhagen.

A United Nations Environment Program (UNEP) study calculated that warming would still go up to 5 degrees centigrade using the numbers calculated in Copenhagen, far surpassing the 2 degree centigrade threshold that scientists said should be mitigated to avoid climate chaos. Regardless, the numbers in Doha have dropped even lower.

The EU pledge, for example, of emissions reduction of 20 percent until 2020 will in reality be only 12 percent because they claim to have already accomplished the 8 percent during the first Kyoto Protocol period. Then for the remaining 12 percent they will not even make real reductions, as they will use market mechanisms.

On agriculture, at the COP17 in Durban, it was agreed to move forward on the issue of agriculture, possibly developing a work program on it. Agriculture as whole, until Durban, has been outside the UNFCCC negotiations, and more importantly, outside the reach of carbon markets. But in Durban and in Qatar, developed countries as well as big farmer organizations and agri-business claiming to be representing small farmers from all over the world, have been pushing very hard to advance the entry of agriculture in the negotiations.

Agriculture, if developed into a work program in the UNFCCC negotiations, will head towards the development of a climate-smart agriculture system or what they call “sustainable intensification” or increasing yield per unit of land. This will open the door for carbon markets in agriculture, will allow for carbon accounting to determine agricultural policy, will open the door to the further propagation of genetically modified organisms (GMOs) and other technological fixes such as synthetic biology, and will favor agribusiness over small farmers and peasants.

The developed countries have also turned the issue of finance into a mockery. They promised a measly 100 billion USD by 2020. The United Nations Department of Economic and Social Affairs’ 2009 UN World Economic and Social Survey estimated that 500-600 Billion USD is what is needed every year by developing countries to adapt to and mitigate climate change.

The US government alone spent 661 Billion USD on military expenditures in 2009. The 100 billion USD offer is already an insult but to add to that, developed countries have proposed that the World Bank be the interim trustee, that funds can come from a variety of sources and that funds can come in the form of loans.

In terms of transfer of technology, again, a commitment that developed countries need to fulfill following the principle of historical responsibility, there is nothing. The issue of Intellectual Property Rights has not been addressed and therefore the developing countries will need to pay in order to access the technologies that should be their right to access.

In 2007, when the fourth report of the Intergovernmental Panel on Climate Change released its report, their findings already underlined the urgency of the situation. Today, we are in a situation far worse than they had predicted. Last September, arctic sea ice melted to the lowest level since scientists began to keep records in 1979. Scientists even stated that if this rate continues, we will no longer have sea ice by the end of this decade.

Already, there is a growing relation between climate change and the staggering increases in food prices and the growing food crisis. Climate change is also forcibly displacing millions from their homes. In 2010 alone, it was estimated that more than 30 million people were forcibly displaced by environmental and weather-related disasters across Asia. This week alone, as climate negotiations move backward, more than 300 people died in one of the strongest typhoons to hit the Philippines.

La Via Campesina, the international peasants movement, representing more than 200 million small farmers around the world, denounces the utilization of the climate negotiations to legitimize the continuation of business as usual at the expense of humanity and the planet.

The inaction in the climate negotiations is a reflection of the corporate capture of governments by big business who want to continue exploiting nature to gain as much profit as possible. While governments play silly games – debating blank pages and creating loopholes to escape responsibility – peasants and small farmers, who are among the most affected by the climate crisis, are the ones implementing real solutions on the ground to adapt to climate conditions and realize food sovereingty. Studies have shown that small farmers still produce the majority of the world’s food. We are not only feeding the people but also adapting to new climate conditions using agroecology and peasant seed varieties.

La Via Campesina rejects false capitalist solutions of the green economy which will only worsen the climate and food crises. Peasants are helping to save humanity through agroecological farming – combating hunger and cooling the planet.