TransCanada’s massive pipeline scheme is being challenged from First Nations, provincial and municipal governments, environmental and grassroots groups, and even from other pipeline companies. Together, these forces can stop the latest plan to spread dirty tar sands oil across Canada and around the world. 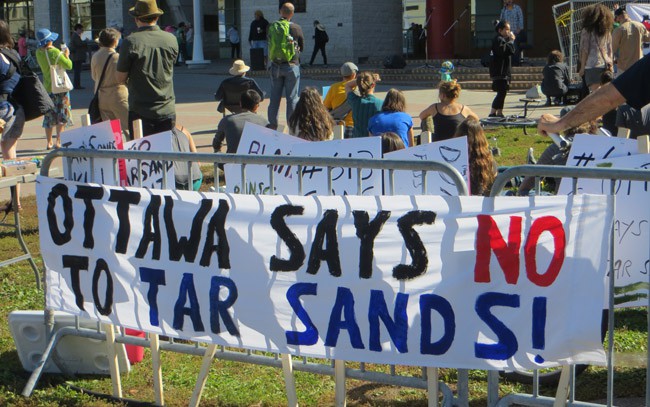 Elizabeth Shope is an Advocate with the National Resources Defense Council in Washington, DC. Shelley Kath is an NRDC Senior Consultant, and Joshua Axelrod, is an NRDC Legal Intern.

The project could carry up to 1.1 million barrels per day of crude oil including a substantial amount of diluted bitumen tar sands crude. While pipelines to the West Coast and Gulf Coast were facing major hurdles, industry mistakenly believed the Energy East project would be easier to force through the permitting process to get some of Alberta’s land-locked tar sands to market.

In August, TransCanada announced that it had secured enough interest from “shippers” (producers and refiners) to make the 1.1 million barrel per day project economically feasible. And the Premiers of Alberta and New Brunswick—Alison Redford and David Alward—have become champions of the proposed Energy East tar sands pipeline.

However, since TransCanada announced its plans to move forward with the Energy East project, opposition has been growing daily. Not only does the project face significant regulatory  hurdles, it is far from a done deal politically. The proposal has even sparked controversy among natural gas industry players. In fact, the roadblocks to Energy East are so significant that the pipeline project is looking like another industry pipe dream.

To make Energy East a reality, TransCanada will need to build more than 1,400 kilometers (870 miles) of new pipe, much of it through Quebec. Though Quebec’s premier has expressed neither support for nor opposition to the project, she faces pressure to use her influence to block it and has expressed that the province has considerable concerns about the environmental impacts of the project. Indeed, Quebec is often seen as the “greenest” province in Canada with Quebeckers placing a high value on their pro-environment record.

It is hard to imagine that Quebeckers want their lands to play a crucial role in creating a route for dirty oil to reach the world market. Some in the business world have gone so far as to say that “TransCanada’s challenge in Quebec is so big that this project just won’t happen.”

Even more problematic for TransCanada’s tar sands dreams is the fact that Ontario’s provincial government has become skeptical of the project’s benefits, especially for Ontario itself. Not only does Ontario plan to intervene in regulatory hearings likely to take place later in 2014, it also plans to ensure that TransCanada addresses safety and environmental concerns. Though neither Ontario nor Quebec has the outright power to stop the pipeline from being developed, the fact that more than 50% of its extraordinary length will pass through the two provinces is a cause for major concern for TransCanada.

Perhaps even more fatal than the lukewarm reception for Energy East in Ontario and Quebec is the false promise of energy independence touted by TransCanada and the project’s supporters. A quick look at the development plans linked to the pipeline make it clear that the oil transported via Energy East is not primarily destined for the Canadian market.Already, more than 50% of the oil refined in Saint John is exported to the U.S. market.

Further, refineries in Quebec and New Brunswick are not outfitted for processing the heavy crude that will flow from Alberta, suggesting that the target market will be international. Indeed, because of high worldwide demand, it is ludicrous to imagine that producers will want to keep their product in a saturated market with depressed priceswhen they could be selling their oil for significant profit abroad.

This is not a company’s patriotic proposal for “nation building,” as some would like the world to believe. Instead, in the words of Irving Oil, the project will bring “a whole new industry into Saint John, which is crude oil export.”

TransCanada will face tremendous environmental mobilization against the Energy East tar sands pipeline – on a similar scale to the opposition against Keystone XL. Tar sands oil production has not gotten any cleaner, and a proposal that has the potential to increase the amount of tar sands reaching the global market will face a level of opposition similar to that seen with other major tar sands pipeline proposals.

Concern about tar sands pipeline safety risks has been growing, as the world has recently witnessed major tar sands pipeline spills including into the Kalamazoo River in Michigan in 2010, and in March 2013 in Mayflower, Arkansas. Both spills are still being cleaned up. The Energy East project would include the conversion of roughly 3,000 km (1,864 mi) of natural gas pipeline into a tar sands pipeline. Parts of the existing pipeline, which travels from the Alberta-Saskatchewan border to a point southeast of Montreal, were built in the 1950s.

A pipeline carrying heavy tar sands crude creates significant risk for leaks and ruptures that could threaten the drinking water supplies for millions of Canadians.

As well, the spectre of tar sands spills in the iconic Bay of Fundy, where the pipeline would terminate and tar sands exports by tanker would begin, is sure to attract ardent opposition. This battle will be the bookend to the fierce opposition to tar sands tankers on British Columbia’s coast, seen in the battle against the Northern Gateway pipeline project. The tides in the Bay of Fundy are legendary as the highest, and consequently some of the fastest, tides in the world, creating special risks and potentially disastrous consequences for spills in the Bay region which includes three Maritime Provinces (New Brunswick, Prince Edward Island and Nova Scotia) as well as northern Maine. Part of the Bay of Fundy is a UNESCO Biosphere Reserve.

Grassroots have already begun mobilizing to educate citizens at the Energy East open houses being held by TransCanada, teaching people about the risks of tar sands. For at least one open house, activists wore polo shirts that looked like TransCanada shirts, but which instead had “SaveCanada” written on the shirts.

In the words of Council of Canadians, from here on out, this “pipeline will face fierce opposition.”

Like the organized and highly mobilized First Nation and tribal opposition that TransCanada and Enbridge, Inc. have already faced with their Keystone XL and Northern Gateway proposals, First Nation opposition to the new Energy East project seems likely in a number of communities given the risks that the pipeline poses to their lands, waters, salmon fisheries, and treaty rights.

Soon after TransCanada publicly announced its plans to move forward with Energy East infrastructure projects, First Nations chiefs began to express serious concerns about the plan. The Assembly of First Nations Chiefs in New Brunswick raised serious questions about the deep water marine terminal in Saint John that would be required as part of Energy East, concerned about the environmental impacts it could have on the aboriginal fishery in the Bay of Fundy.

A centerpiece of the Energy East proposal is TransCanada’s plan to convert 3,000 kilometers (1,864 miles) of an existing natural gas pipeline for use in moving tar sands oil out of Alberta. TransCanada’s proposal will lead to a loss of natural gas transmission capacity, a fact that is almost certain to drive up prices for customers across the Canadian provinces. Further, Gaz Metro, Union Gas and an Enbridge, Inc. subsidiary have all complained to the National Energy Board that “TransCanada is abusing its market power.”

Enbridge, along with the natural gas utilities in Ontario and Quebec, appears poised to continue in this fight against Energy East. Talk about an unlikely bedfellow!

The gas-to-crude conversion aspect of the project will also mean that TransCanada’s request for approval from the National Energy Board in Canada will be anything but run-of-the-mill. In fact, it will be highly complex, requiring as many as five different applications and may roll out in two separate hearing processes, as it did when TransCanada converted a different part of its natural gas Mainline for the original Keystone tar sands pipeline. Given recent increasing tensions between TransCanada and gas distributors, those aspects of the hearing process are likely to be slow and contentious.

At $12 billion dollars, the Energy East project is by far the largest and most costly ever proposed in TransCanada’s 60 year history. To give a sense of just how remarkable this price tag is, the Keystone XL project is slated to cost less than half as much, with a price tag of “only” $5.3 billion. Considering the near certain risk of delay, the high probability of a costly accident, and the current unpredictability in world energy markets, Energy East is also a financially risky endeavor.

Given all these major hurdles TransCanada faces, Energy East appears to be just another pipe dream, and an attempt to convince the United States of the fallacy that Keystone XL will not have an impact on climate (as the industry spin goes, tar sands will be extracted with or without Keystone XL – so the climate impacts should be ignored). The reality is that industry’s tar sands expansion dreams require all of the proposed pipelines, but that there is so much opposition that none of them are likely to be built.