Canada’s government is deliberately promoting policies that will kill over 100 million people by 2030. When will these criminals be called to account?

Canada’s government is deliberately promoting policies that will kill over 100 million people by 2030. When will these criminals be called to account? 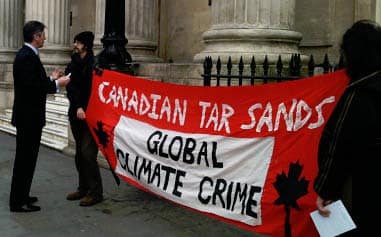 What do you call someone who pursues policies knowing that they contribute to large numbers of deaths?

A murderer? A politician?

At a minimum they should be investigated for crimes against humanity.

A slew of studies have detailed the growing toll anthropogenic global warming is having on millions of people around the world. The Climate Vulnerability Monitor has estimated that climate disturbances are already responsible for some 400,000 deaths per year with most of the victims living in poor countries that discharge few greenhouse gasses.

A September report commissioned by 20 governments found that over 100 million people will die by 2030 if the world fails to tackle climate change and carbon-intensive economies. “A combined climate-carbon crisis is estimated to claim 100 million lives between now and the end of the next decade,” the report conducted by humanitarian organization DARA explained. According to the study, five million die each year because of air pollution, hunger and disease caused by climate change and carbon-intensive economies. By 2030 that toll is expected to reach six million if current patterns of fossil fuel use continue.

Despite mounting evidence of runaway global warming and an overwhelming consensus among Canadians that something must be done to reduce carbon emissions, Stephen Harper’s government has been at the forefront of efforts to block and reverse progress in this area. “Canada killing European effort to cut emissions” and “Canada blocking [Commonwealth] consensus on climate change,” explained Globe and Mail headlines concerning two different international meetings in 2007. In late 2008, the Climate Action Network said Canada was the country most active in undermining UN climate negotiations in Poland.

At every turn Harper’s government has blocked progress on setting minimally serious targets for reducing CO2 emissions or providing aid to poor countries to implement similar measures. In December 2011, Canada led an effort to scuttle a follow-up agreement to the Kyoto Protocol at a UN climate change conference in South Africa. During the COP 17 (Conference of Parties) in Durban, Canada received six “fossil of the day” awards handed out by environmental groups to countries obstructing negotiations. It became so normal that on the day Canada did not receive the award Montreal daily Le Devoir ran a story about it.

At the 2011 conference Canada was also crowned with the “colossal fossil” for being “the country which has done the most day after day to prevent a climate treaty.” This marked the fifth consecutive year Canada received this dubious honour given by 700 international civil society organizations from 90 countries.

Last year Canada became the first country to withdraw from the Kyoto Protocol, an international agreement that commits the leading industrial economies to reducing their CO2 emissions below 1990 levels. “France, China, Japan Hammer Canada Over Kyoto,” noted a CTV.ca headline.

In addition to undermining international climate accords, Harper’s government has aggressively opposed efforts to reduce carbon emissions from fuel sources in the U.S. and Europe.

This country’s diplomats have lobbied forcefully against the European Union’s Fuel Quality Directive, which designated tar sands oil as a high-polluting fuel source. Friends of the Earth Europe found that Canadian officials met British and European representatives 110 times between September 2009 and July 2011 in a bid to derail the new fuel legislation.

Chris Davies, a British member of the European parliament, told Reuters in May that Canada’s lobbying campaign “has been stunning in its intensity.”

Highlighting the unique nature of Canada’s campaign, Satu Hassi, a Finnish MP, said: “There have been massive lobbying campaigns by the car industry, by the chemicals industry, banks, food giants, etc. But so far I have not seen such a lobbying campaign by any state.”

The Conservatives also worked feverishly to beat back U.S. legislation that might curtail tar sands exports, establishing the United States Oil Sands Advocacy Strategy. As part of this effort, they’ve tried to undermine California’s Low Carbon Fuel Standard and Section 526 of Washington’s Energy Security and Independence Act. Both of these measures were designed to deter the use of high-carbon fuel sources.

In January, Globe and Mail columnist Jeffrey Simpson wrote: “The Harper government put Canada’s entire diplomatic apparatus in the US behind the Keystone [pipeline] campaign” to ship tar sands oil to the U.S. Gulf Coast. The Canadian embassy in Washington and all of Canada’s 22 consular offices in the U.S. have been ordered to advocate for dirty oil.

The Conservatives’ actions have spoken to the world. Harper doesn’t care if climate disturbances imperil millions of people’s lives.

One must ask again: What exactly should a politician obstructing all international efforts to reduce carbon emissions be called?

Yves Engler is the author of Lester Pearson’s Peacekeeping: The Truth May Hurt. His latest book is The Ugly Canadian: Stephen Harper’s foreign policy. Read other articles by Yves, or visit Yves’s website.

Copyright © 2012, posted with the author’s permission. Also published as “Global warming: A Weapon of mass destruction” in Dissident Voice.