Sandy causes a minor housing problem for the ultra-rich

Sandy causes a minor housing problem for the ultra-rich … 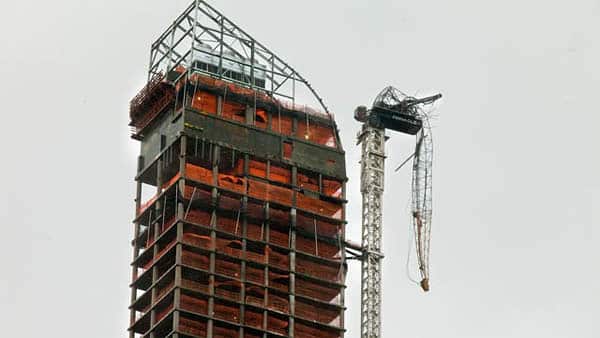 A crane dangles over New York

In Manhattan, the arm of a crane atop a 90-story luxury high rise on 57th Street snapped in Monday’s high winds. With tons of heavy machinery threatening to plunge 1,000 feet to the street below, police cleared the area while they figured out what to do next.

Largely escaping commentary was the fact that One57, as the building is known, is a future playground for some of the world’s most obscenely wealthy people. Apartments on the top floor of the building are being sold for an eye-popping $90 million each. No doubt the billionaires anxious to take possession of their new luxury condos in the sky will be disappointed that the storm will delay their occupancy.

Meanwhile, the city of New York is spending $1.5 billion over 15 years to upgrade its storm water management system, and it recently announced another $1 billion in “unglamorous” infrastructure work. But this is a fraction of what’s needed to address the growing frequency of “100-year” storms. …

What’s remarkable is that the billionaires lining up to purchase condos in One57 — or billionaire Mayor Michael Bloomberg himself — could finance these projects out of their own pockets without even noticing. Instead, the billionaires build giant condos in the sky for themselves while the rest of us contend with ailing schools, creaking infrastructure, tax increases and budget cuts — because “the money has to come from somewhere.”

Addendum: The New York Times reports that “for nearly a decade” scientists have been telling city and state officials “that New York faces certain peril: rising sea levels, more frequent flooding and extreme weather patterns.” Only now are those officials taking the “first tentative steps toward considering” doing something to counteract the effects of climate change.