Chris Williams’ excellent Climate & Capitalism article, “Frankenstorms and climate change: How the 1% created a monster,” has attracted some right-wing criticism. 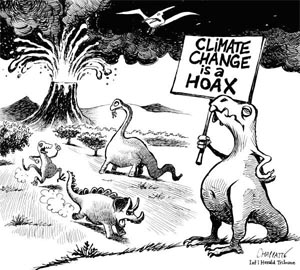 It was published by Britain’s Daily Telegraph, a newspaper so loyal to the Conservative party that it’s often called the Torygraph. The author is Brendan O’Neill, a one-time leftist who has morphed into an extreme pro-capitalist, anti-environment libertarian.

When not writing for the high Tory press, O’Neill edits Spiked, a website that, as George Monbiot writes, “concentrates on denying the existence of social and environmental problems, and attacking protest movements with a hatred so intense and disproportionate that it must contain an element of self-disgust.”

O’Neill’s Telegraph article carries the bizarre headline “Blaming Hurricane Sandy on the greedy and industrious is just as mad as blaming it on gays.”

O’Neill tells his readers about an American preacher who blames Hurricane Sandy on homosexuality. Then, in an astounding leap of illogic, he declares that environmentalists do the same thing – “Only where Christian zealots blame sinning mankind, green zealots blame industrious mankind.”

“This was taken to its logical conclusion on a radical website called Climate and Capitalism, which argues that carbon-spouting fat-cat companies created Sandy. ‘How the 1 per cent created a monster,” runs the headline. Is it really any more progressive to blame natural disasters on the decadence of the well-off than it is to blame it on the alleged decadence of homosexuals? No amount of pointing at pie charts can disguise the fact that Sandy-exploiting greens are peddling the same medieval prejudices as cranky Christian preachers.”

Note the total absence of (a) science or (b) logic. A nutbar preacher says the hurricane is god’s will; Chris says its strength is a result of greenhouse gas emissions. The preacher bases his judgement on ancient scriptures; Chris bases his on the best modern climate science. Obviously they are the same. Right.

“The profound irony being that, far from being a disaster for mankind, development and progress have been an enormous, life-saving boon. Just look at the difference in Sandy’s impact on New York and its impact on poor, undeveloped Haiti, where there was far more destruction. How perverse to accuse growth and development of causing disaster, when the evidence suggests they protect us from it.”

When I asked Chris to comment, he concisely dismissed O’Neill’s reactionary rant:

“What a mad article! Yep, all Haiti needs is a bit more free trade and capitalist laissez-faire and it would be an awesomely safe place to experience a hurricane. Of course, some crazy radicals might argue that Western (mal)development stretching back to colonial times has something to do with the fact that Haiti is 98% deforested and the poorest country in the Western hemisphere. But, maybe I’m just some insane kook blaming climate change on capitalism, which is, apparently, as insane as blaming it on gay people.”

In his Frankenstorm article, Chris warned that “representatives of the elite will sponsor and push policies which favor their class, not ours.” Brendan O’Neill’s pretentious and absurd article is a minor contribution to that ideological effort.