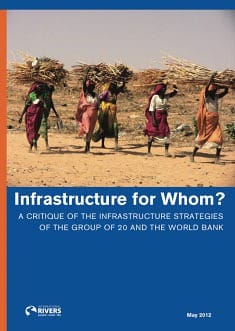 The report finds that large dams – and particularly the complex multipurpose schemes once again being promoted by the World Bank – provide energy to extractive industries controlled by multinational corporations while bypassing the rural poor. For example, in spite of the billions of dollars that have been poured into the Inga hydro-electric project in the Democratic Republic of Congo over the past five decades, 94% of the country’s people still have no access to electricity.

Most rural poor in Africa and other parts of the world live closer to rivers or other sources of renewable energy than to an electric grid. Decentralized, diversified solutions are more affordable than electricity from the central grid, and can support the creation of rural jobs in agriculture, agro-processing industries and tourism. They strengthen the institutional capacities and climate resilience of poor societies.

Despite this, the World Bank and the G20 are pushing for more public support to private megaprojects.

International Rivers makes the case for bottom-up solutions that address the needs of the poor directly, while strengthening democratic control over essential public services.

The report can be downloaded as a PDF in English or Spanish.