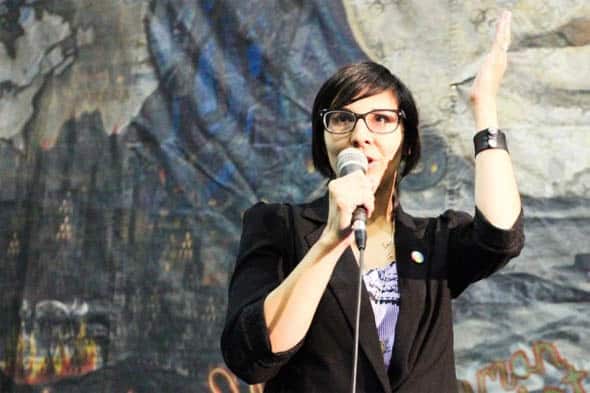 Athabasca Chipewyan First Nation spokesperson Eriel Deranger speaks out against the oilsands at a recent event in Vancouver.

A First Nation whose land sits in the heart of the Alberta oil sands has ramped up its legal battle against the vast industrial development, which has generated controversy because of its massive carbon footprint, untreated tailings ponds and at least three proposed pipelines: Keystone XL, Kinder Morgan and Enbridge‘s Northern Gateway.

The Athabasca Chipewyan First Nation (ACFN) on October 1 launched a constitutional challenge based in Treaty 8 alleging that the provincial government and the energy giant Shell Canada, which is looking to expand its Jackpine oil sands mine in the band’s traditional territories, have failed to adequately consult them and thus have in effect violated their treaty rights to use their land traditionally.

The challenge, submitted to the review panel that is evaluating the proposal, calls for mandatory consultation with First Nation treaty signatories. It also demands that their right to access their territories for hunting, trapping, harvesting and other traditional uses be honored. The Chipewyan allege that the Jackpine expansion, by damaging the environment, would prevent them from engaging in those activities and resources and thus violate the treaty.

Treaty 8, which forms the basis for ACFN’s constitutional challenge, is a historic agreement between the Crown and indigenous nations that promised aboriginal people the right to use their traditional lands and natural resources, and to self-governance. The ACFN is hoping to ”set new precedents that may mean changes to the regulatory process,” the band said in a statement.

“Consultation and accommodation—and the way it’s being done—has become shady deals, and coercion does not encompass the idea of free, prior and informed consent,” ACFN spokesperson Eriel Deranger told Indian Country Today Media Network. “The communities here have been bullied—by industry, a pro-industry provincial government and a pro-industry federal government—to just shut up and take what we can get out of a deal.”

Shell’s proposal—already facing a separate ACFN lawsuit to halt or alter it—would see the Jackpine project increase production every day by 100,000 barrels. But the company must first complete a review that begins on October 29, and ACFN says that the 31,429-acre disturbance area of the mine would devastate part of the culturally important Muskeg River, which is where the nation conducts most of its traditional hunting, trapping and harvesting activities.

“What are the costs of pushing the industry through?” Deranger asked. “We’re talking about doubling production in the tar sands. We’re already having problems with the current pace of development. Doubling it is psychotic. Some people think the tar sands and First Nations people can coexist, [but] I don’t know how you could possible rip up thousands of kilometers of boreal forest and traditional territories, de-water, poison and contaminate river systems, and consider that a plausible way for coexistence?”

But Shell insisted that it has, in fact, consulted the First Nation repeatedly, and that it does respect ACFN’s treaty rights.

“Shell has engaged extensively with ACFN over the last 15 years,” spokesperson David Williams told The Globe and Mail. “We’re aware of their concerns around Treaty 8, and our door remains open.”

Deranger acknowledged that some aboriginal people are divided over the benefits of the oil sands (or what its opponents call tar sands) in which a thick oil product, bitumen, is extracted from the earth in an energy-intensive mining and refining process.

“There are First Nations who think the tar sands are great,” Deranger admitted. “People have jobs. People now can afford to take their kids to Edmonton to go to the dentist. These are luxuries for people. But we have to start weighing the costs.”

Those costs—hundreds of toxic tailings ponds, open pit mines, significant emissions and polluted rivers across a giant swathe of Alberta—have not been properly addressed with ACFN, Deranger says.

“How will they potentially mitigate the impacts on traditional and treaty rights from their proposed expansion project in the oil sands?” she asked. “Industry isn’t meeting those standards. We’re not going to make any deals with you anymore. We’re going to fight your projects tooth and nail through a process that already exists.”