Representatives of four Indigenous nations will attend Shell Oil’s annual meeting to demand an end to its massive human and ecological rights violations in Canada, Alaska, and Nigeria.

On May 18th in London, the Indigenous Environmental Network in partnership with Athabasca Chipewyan First Nation are launching an Indigenous-led campaign against Shell and its harmful projects. The ‘Get the Shell Out!’  meeting, at 7.30pm at Toynbee Hall, East London, is co-sponsored by UK Tar Sands Network, Women of Africa, Platform, Rising Tide UK, FairPensions, Greenpeace, Shell to Sea, Climate Rush, Art Not Oil and the Rossport Solidarity Camp.

A delegation of four Indigenous peoples from North America will participate in the public launch of a report profiling the British-Dutch company’s increasing involvement in the world’s dirtiest and riskiest energy projects. The delegation members are: 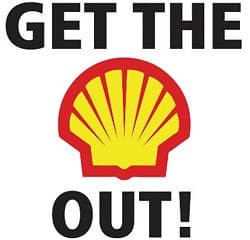 The delegation will then attend Shell’s Annual General Meeting in The Hague, Netherlands, on 22nd May, where they will confront the Chairman and Board over the massive human and ecological rights violations and economic devastation that the company’s operations have brought to local communities. There will also be a simultaneous creative protest by UK activist groups, including UK Tar Sands Network and London Rising Tide, at Shell’s satellite AGM in the Barbican Centre on May 22nd.

“Tar sands extraction projects on our traditional lands are being approved at a pace that is both irresponsible and irreparably destructive. People in the community of Fort Chipewyan? are genuinely afraid. Our food and water sources are contaminated, resulting in a fear of eating traditional foods and eroding the continuation of our cultural and subsistence lifestyles. Yet Shell plans to aggressively expand its activities, doubling production. The Athabasca Chipewyan First Nation is calling on Shell to meet its past agreements and halt expansion until our broader concerns about the cumulative impacts of tar sands operations are addressed.”

Ron Plain, from Aamjiwnaang First Nation, Ontario – which has been called ‘the most polluted place in North America’ by the National Geographic Society, and the ‘the most contaminated airshed in Canada’ by the World Health Organization due to its proximity to ‘Chemical Valley’ where Shell’s and other tar sands operators’ refineries are causing serious health and reproductive impacts – said:

“Aamjiwnaang is the first community in the world to experience birth ratios of 2 girls to 1 boy due to endocrine disruption from the pollution. This is the first step towards extinction. Shell have admitted that their current facility, which is located at the fence-line of Aamjiwnaang, ‘could not meet today’s environmental regulations or standards.’ But Shell’s proposal for a new facility within Aamjiwnaang territory was recently denied by Canada for a whole host of environmental, social and other reasons. The corporate response to that set-back was to build onto the antiquated facility the equipment needed to process more tar sands bitumen.”

Robert Thompson, Chairman of REDOIL and an Inupiat from Kaktovik, a village on the edge of the Arctic Ocean in Alaska, where Shell plans to drill offshore in Arctic waters this summer, said:

“Shell plans to drill in the Arctic this summer without the proven technology or infrastructure to deal with inevitable spills. They have not demonstrated the ability to clean up spills within or from under the ice or during storms. Our culture depends on a clean ocean, and we have subsisted in this region for 12,000 years. We oppose Shell’s plans that have the potential to destroy the culture of our people and will further push the planet into irreversible climate change.”

“Not only have Shell reveled in being a climate criminal, they have also been exposed as fighting the European Union’s proposed Fuel Quality Directive, in collusion with the Canadian government. Their continued environmental destruction and violation of Indigenous rights across Canada, Alaska and Nigeria show that Shell needs to change their operations or face increasing protest and opposition across the world. Our organization is supporting an Indigenous-led campaign against Shell’s extreme energy projects to bring together front-line impacted communities.”

The report will be available online at www.no-tar-sands.org on Friday, April 18.