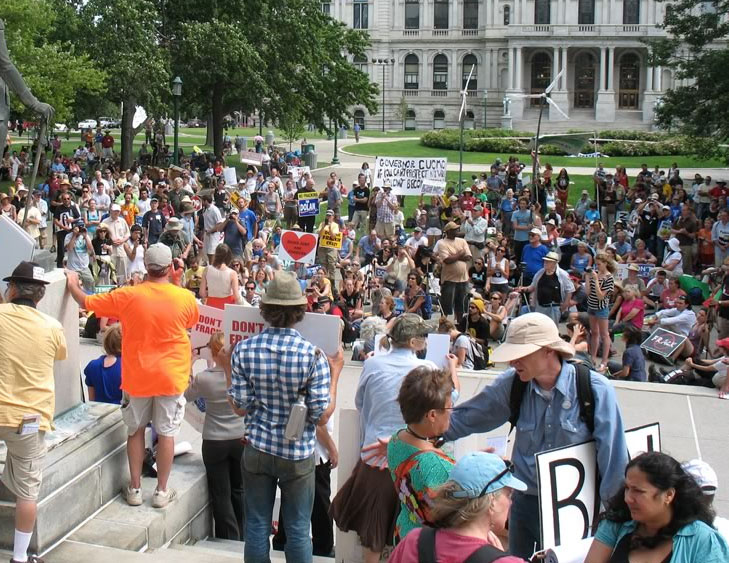 (August 28, 2012) Several thousand people flooded New York’s state capital Monday, delivering letters to Governor Andrew Cuomo’s office containing pledges to take nonviolent direct action against hydraulic-fracturing, or fracking, should gas companies be allowed to drill the state. Since taking office in 2010 Cuomo has been weighing whether to open New York up for fracking, but a groundswell of resistance from environmental groups has so far held the frackers at bay.

At a rate of over a thousand per week, organizers are collecting the signatures of New York residents committed to resisting fracking. What happens here will likely have broader implications for the wider anti-fracking movement, which is gaining momentum across the country, as well as for the global struggle against climate change.

Fracking is a carbon intensive extraction method that involves pumping millions of gallons of water, sand and toxic chemicals like benzine and formaldehyde underground, in order to fissure shale rock and release methane deposits from within. The industry says fracking is safe, but the drilling technique has become synonymous with contaminated water, congested air and curdled soil in the 34 U.S. states where it has occurred.

New York and Maryland are the only states left that drillers want to frack, but have yet to gain permission. These two states sit on the Marcellus Shale watershed, a region that has been discovered to be rich in methane deposits that frackers want to extract and refine into natural gas.

“This is the final frontier,” said Russell Mendell, who helped organize the “Don’t Frack NY Rally” rally. “This is the place where we say no more.”

Among those who came to take a stand on Monday and deliver their pledge of resistance to fracking was Gerri Wiley, who lives in the town of Owego, in Tioga County, near the Susquehanna River. Wiley also lives near a crystalline silica trans-loading facility where frack sand is taken off of trains and trucked to neighboring Pennsylvania, a state where drilling wells have been cropping up at an increasing rate of 2,500 per year due to almost no regulation. She says every eighth or tenth vehicle driving by her house is carrying silica dust, which, like asbestos fibers, causes respiratory problems.

Residents of Owego, already living in fear of poisoning from silica blow-off, learned from the New York Times this June that Cuomo had designs to allow fracking in their county, along with four others in the state’s Southern Tier. Out of 3,600 people in Owego, 2,500 have signed a petition to ban fracking, a petition that Owego’s town board has refused to accept.

For Wiley, the struggle against fracking is a means to preserve her way of life and preserve the roots she has sowed in Owego for many years. “If we can’t stop Cuomo from bringing fracking into the state many of us are going to leave,” Wiley said. But she and her neighbors haven’t drawn up contingency plans just yet because, as she explained, “We believe we can still win this fight.”

Marching through downtown Albany, activists carried a giant puppet bust of Cuomo. On either side of the governor’s shoulders sat an angel and a devil. In his hands the demon carried a bundle of bills, a special delivery for the governor. Drillers have made 2,349 campaign contributions totaling $1.34 million since 2008 to Republican and Democrat lawmakers alike hoping to sway the scales toward fracking. Cuomo himself has accepted over $150,000 worth of gas industry campaign contributions.

Meanwhile, legions of fractivists have been following Cuomo nearly everywhere he goes. Last Wednesday activists interrupted a policy summit hosted by Cuomo in Midtown Manhattan. The conference was ostensibly focused on promoting growth in New York’s agriculture and industrial sectors, but in all likelihood that was just a front for Cuomo to feel out a 2016 presidential bid. While several hundred people protested outside, a magician and his assistant managed to penetrate the castle walls of the Sheraton Hotel.

“My beautiful assistant and I stood up and addressed the crowd,” Eric Walton later described. “I said ‘Ladies and gentlemen, it is written in the New Testament that Jesus turned water into wine. Now, for the miracle of hydraulic fracturing, we will see Governor Cuomo turn water into brine.'” Walton then took a bottle of clear water from his suit jacket and poured it into a transparent cup. The water quickly transformed into cloudy muck. He handed the cup to his assistant who, no sooner had she taken a sip and handed the glass back to the magician, collapsed.

Governor Bill Richardson of New Mexico was speaking at the time, praising Cuomo for looking at the science of fracking’s environmental impacts before giving the greenlight to drill. But Cuomo need look no further than the neighboring state of Pennsylvania, where communities have literally seen theirwater turn to brine, for a glimpse of the consequences fracking could bring to New York.

Yet, there are many indications that Cuomo will not be making his decision based on science. The $153,816 his campaign committee has taken from the gas industry along with recent revelations that New York’s Department of Environmental Conservation (DEC) – the agency charged with investigating fracking’s potential impact on New York – secretly shared information with drillers on planned regulations show that politics and corporate interest are more likely to be the deciding factors.

The fracking industry isn’t just whispering in the ears of Cuomo and other decision makers. It has launched a million dollar ad campaign in New York and across the country to convince the public that fracking is not only safe, but a path to economic prosperity. That’s a claim that Charlotte Bevins would dispute. Her brother Charles was crushed by a fork lift last year when the ground at a conventional drilling rig in central New York caved in. The rig operator paid a $4,900 fine for what she describes as murder.

Speaking in public for the first time, the West Virginia native told the thousands gathered in front of Cuomo’s office Monday, “I’m here to let people know that there is more to this than the water pollution or the air pollution. Lives are being lost and they’re running through them like they’re expendable.” Bevins said many workers in the industry have opened up to her and told her of the dangerous conditions they face. “Whether or not there are laws put in place there are corners and [the gas industry] is going to cut those corners. We need to move on into the future to something that’s safer, something that’s permanent. If not for our environment and our future than for my brother’s, son’s and daughter’s future.”

“When people talk about environmental justice, they need to include the concept of class,” he said. “A lot of these jobs in the gas industry aren’t unionized.”

DC 37, which represents 130,000 members, recently passed a resolution against fracking. According to Goff, more unions need to be concerned for their members’ quality of life beyond the workplace and that the environmental movement will become more powerful by inviting unions on board.

“We’re talking about people who represent an incredibly diverse demographic in the U.S. You have large numbers of women in the labor movement, people of color and a range of communities. If we can get the several million union members in the U.S. to see themselves as environmentalists it would be a tremendous plus.”

With that prospect still just in the beginning stages, the fight against fracking is far from being fair. “It’s David verse Goliath,” said the rally’s organizer, Russell Mendell. “But looking at the people here, hearing their stories, hearing their commitment and their dedication, I believe we can do it. I believe we can ban fracking.”

On the way to Cuomo’s office on Monday, demonstrators paused and linked arms in a display of their collective power. “DEC if you will not protect us, we will protect ourselves,” they said in unison via a people’s mic. “Governor Cuomo, if you sell us out, we will force you out of office. Gas industry, first we will block you, then we will remove you from our state.”

These chants are hardly bluster. Little hints are emerging that David is actually getting to Goliath. Despite plans disclosed earlier this summer by the Times to frack New York’s Southern Tier, Cuomo appears to have gotten cold feet, telling media last week that there is no timetable on the decision.

According to Gerri Wiley, who was in a pack bird-dogging Cuomo with chants while he attempted to kiss babies at the New York State Fair on Thursday, the governor complimented a woman’s t-shirt that read, “Don’t frack with New York.” Wiley’s face, moist from recanting her tribulations in Owego, then broke into a look of consternation. “Now, what is that?” she asked.

Before the march to the governor’s office on Monday, activists gathered at a small church in downtown Albany. At the end of a weekend packed with workshops, teach-ins and strategy sessions meant to bring groups fighting fracking in individual communities together, author and climate activist Bill McKibben addressed the group. He tied the battle against fracking on a local and state level to the struggle against the escalating effects of global warming. “It’s really important to be a concerned citizen of Chennago County, of Genesee County, of Broome County,” said Mckibben. “But at this point, you have to be a concerned citizens of the planet. If we don’t realize that right now, it’s going to be too late.”

New York is significant in the battle to move off of fossil fuels and onto renewable energy, because, as McKibben explains, what happens in rural communities fighting fracking “reverberates loudly in Wall Street, and Wall Street is the place that gets to decide whether these companies get the money they need to go drill and go buy new land.” He added that those living with climate change-induced drought in Mexico or rising sea levels in the Maldives “are your brothers and sisters in this fight.”