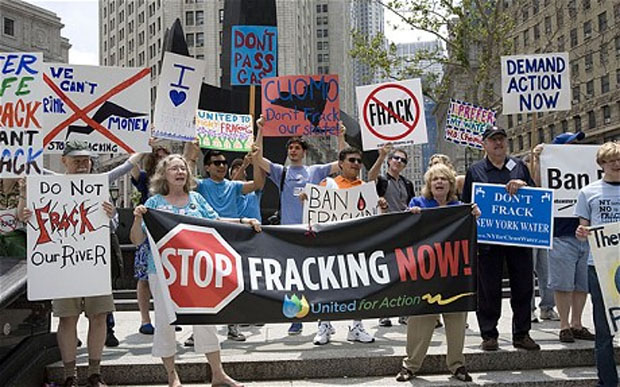 I have news for the Environmental Defense Fund: the fracking activist community is shocked that you received $6 million from Bloomberg Philanthropies to advocate for fracking regulations. And we aren’t going to stand for it.

EDF says that they’ll be working for “responsible” regulation in 14 states. Of course, this is just double speak that means swooping into states where there is a strong grassroots movement against fracking and shilling for the oil and gas industry. They will claim to represent environmentalists while they promote regulation that is so weak even the gas industry can live with it.

Of course, everyone in the environmental movement knows that this is EDF’s modus operandi. In fact, for years, public interest advocates have rolled their eyes and complained to one another in private about how EDF undercuts their work time and time again. But, everyone is afraid to speak out because they might upset funders, who are turned off by disagreements among environmentalists.

Maybe it’s time to redefine exactly what protecting the environment means. People are ready to fight for what they really want. They don’t want to settle for some weak compromise that was negotiated without a strong fight.

And this time, EDF has met their match. Grassroots activists in communities facing fracking are not beholden to corporations or conservative foundations for funding. They’re tired of the same old game where national green groups undermine their work. Fractivists will never stand still and allow EDF or any other group to come into their state with weak “model legislation” that is simply an industry proposal in disguise.

This is about our children and grandchildren’s future. Fracked gas is no solution to climate change. Cornell University found that methane emissions from shale gas drilling are at least 30 percent higher than those from conventional gas, and may be just as severe as coal. There is absolutely no evidence that shale gas will improve the outlook for the ongoing crisis of global warming. A better strategy is to move away from fossil fuels altogether—not to lock us in to a future dependent on natural gas.

This is especially true since the oil and gas industry is misusing our water supplies at a time when we face increasing droughts that are also associated with climate change. I recently attended an industry conference—the first “summit” of the oil, gas and water industry. Some big numbers about the ongoing use of water resources were exposed at this corporate shindig. An official from Aquatech BV said that 2.4 trillion gallons of produced water (i.e. polluted water) are generated from oil and gas operations in the U.S. each day, and in the rest of the world, another 5.7 trillion gallons of produced water are generated each day—adding up to a total daily volume of 8.1 trillion gallons of polluted water.

This is enough to cover the entire area of the United States 3 feet deep every year. The volume of produced water is increasing at a rate of 8 percent annually according to an official at GE Power.

Further, it seems like almost every week a new study comes out about the dangers of fracking. Stony Brook University published an article in the journal Risk Analysis this month that found substantial water pollution risks to rivers and other waterways from the disposal of fracking wastewater. A University of Texas seismologist tracked earthquakes in the Barnett Shale in Texas and found a correlation between the disposal of fracking wastewater in underground injection wells and small earthquake activity. The research will be published in the journal Proceedings of the National Academy of Sciences this month.

The truth is that fracking is no way to address climate change. Instead, the rapid expansion of the drilling process has brought rampant environmental and economic problems to rural communities. Accidents and leaks have polluted rivers, streams and drinking water supplies. Regions peppered with drilling rigs have high levels of smog as well as other airborne pollutants, including potential carcinogens. Rural communities face an onslaught of heavy truck traffic—often laden with dangerous chemicals used in drilling—and declining property values.

The “bridge fuel” of fracking could well be a bridge to nowhere.

My advice to EDF is to return the money. They will be further discredited in the environmental movement if they pursue this strategy. And eventually, as more people catch on, they will be discredited among not only policymakers and the media, but their membership too.