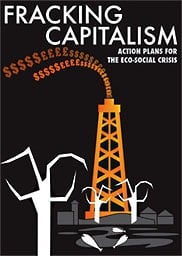 Britain, where I live, is under frack attack.

Fracking Capitalism, produced by the socialist network A World to Win, is an essential resource for everyone engaged in fighting the fracking menace.  It takes apart the arguments for fracking, shows that it is linked to an extractivist capitalist economy that threatens us all, and shows how the movement can fight and win.

Fracking is green, according to its supporters, because shale gas is a less potent greenhouse gas than coal or oil, so it can bridge the gap to a renewable economy.  Fracking Capitalism refutes that false argument. Not only will any increase in any fossil fuel increase emissions, but the methane that can leak from fracking operations is a far more powerful greenhouse gas than carbon dioxide. Far from using fracked gas to prepare for a renewable future, the British government has cut subsidies for solar power, made it more difficult to build wind turbines on land, and is cutting funding for bus travel.

The booklet provides a detailed account of how the fracking industry has advanced in Britain.  The previous Labour government banned it after fracking in Lancashire caused a mini-earthquake, but the current right-wing coalition sees  fracking as a good fit for its profit first corporate agenda, which includes pushing down pay, slashing welfare and deregulating industry.  Cameron not only lifted the ban but launched a pro-fracking PR campaign, and amended planning laws to make approvals easier to get.

The authors put fracking in a broadly ecosocialist context, showing that attempts to cut emissions through carbon trading have failed because they don’t challenge capital’s need for short term growth

They also chart the militant opposition to fracking in the UK, particularly in Balcombe, Sussex, where a campaign using occupy and climate camp tactics recently forced Cuadrilla to pull out of fracking.  Green Party MP Caroline Lucas was arrested during one of the protests, and effective connections have been made between electoral politics, direct action and local protest.

While much of the content is UK specific, particularly the discussion of planning law, it is a well written and detailed guide to the environmental, economic and social issues. I recommend it to anti-fracking campaigners everywhere as a useful tool for challenging this threat.

Derek Wall is International coordinator of the Green Party of England and Wales and a member of the ecosocialist network Green Left.