Hunger and malnutrition are man-made, hardwired in the design of industrial and chemical agriculture. But healthy and nutritious food for all can also be designed, through food democracy. 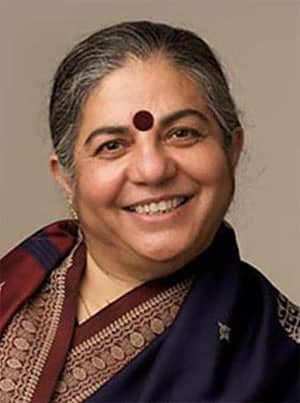 Dr. Vandana Shiva is a philosopher, environmental activist and eco feminist. She is the founder/director of Navdanya Research Foundation, the author of numerous books, and has received the 1993 Right Livelihood Award (Alternative Nobel Prize) and the 2010 Sydney Peace Prize.

Hunger and malnutrition are man-made. They are hardwired in the design of the industrial, chemical model of agriculture. But just as hunger is created by design, healthy and nutritious food for all can also be designed, through food democracy.

We are repeatedly told that we will starve without chemical fertilisers. However, chemical fertilisers, which are essentially poison, undermine food security by destroying the fertility of soil by killing the biodiversity of soil organisms, friendly insects that control pests and pollinators like bees and butterflies necessary for plant reproduction and food production.

Industrial production has led to a severe ecological and social crisis. To ensure the supply of healthy food, we must move towards agro-ecological and sustainable systems of food production that work with nature and not against her. That is what movements that promote biodiversity conservation, like our NGO Navdanya, are designing on the ground.

Industrialisation of agriculture creates hunger and malnutrition, and yet further industrialisation of food systems are offered as solution to the crisis. In the Indian context, agriculture, food and nutrition are seen independent of each other, even though what food is grown and how it is grown determines its nutritional value.

Our agriculture policy focuses on increasing yields of individual crops and not on the output of the food system and its nutritional value. The food security system — based on the public distribution system — does not address issues of nutrition and quality of food, and nutritional programmes are divorced from both agriculture and food security.

The agrarian crisis, the food crisis and the nutrition and health crisis are intimately connected. They need to be addressed together. The objective of agriculture policy cannot be based on promoting industrial processing of food. The chemicalisation of agriculture and food are recipes for “denutrification”. They cannot solve the problem of hunger and malnutrition. The solution to malnutrition begins with the soil.

Industrial agriculture, sold as the Green Revolution and the second Green Revolution to Third World countries, is chemical-intensive, capital-intensive and fossil fuel-intensive. It must, by its very structure, push farmers into debt and indebted farmers off the land. In poor countries, farmers trapped in debt for buying costly chemicals and non-renewable seeds, sell the food they grow to pay back debt. That is why hunger today is a rural phenomenon. Wherever chemicals and commercial seeds have spread, farmers are in debt. They lose entitlement to their own produce and hence get trapped in poverty and hunger.

Industrial chemical agriculture also creates hunger by displacing and destroying the biodiversity, which provides nutrition. The Green Revolution displaced pulses, an important source of proteins, as well as oilseeds, thus reducing nutrition per acre. Monocultures do not produce more food and nutrition. They take up more chemicals and fossil fuels, and hence are profitable for agrochemical companies and oil companies. They produce higher yields of individual commodities but a lower output of food and nutrition.

Industrial chemical agriculture’s measures of productivity focus on labour as the major input while externalising many energy and resource inputs. This biased productivity pushes farmers off the land and replaces them with chemicals and machines, which in turn contribute to greenhouse gases and climate change. Further, industrial agriculture focuses on producing a single crop that can be globally traded as a commodity. The focus on “yield” of individual commodities creates what I call a “monoculture of the mind”. The promotion of so-called high-yield crops leads to the destruction of biodiversity.

Industrial chemical agriculture also causes hunger and malnutrition by robbing crops of nutrients. Industrially produced food is nutritionally empty but loaded with chemicals and toxins. Nutrition in food comes from the nutrients in the soil. Industrial agriculture, based on the NPK mentality of synthetic nitrogen, phosphorous and potassium-based fertilisers, lead to depletion of vital micro-nutrients and trace elements such as magnesium, zinc, calcium, iron.

Biodiverse systems have higher output than monocultures, that is why organic farming is more beneficial for farmers and the earth than chemical farming.

The increase in yields does not translate into more nutrition. In fact, it is leading to malnutrition. To get the required amount of nutrition people need to eat much more food.

The most effective and low-cost strategy for addressing hunger and malnutrition is through biodiverse organic farming. It enriches the soil and nutrient-rich soils give us nutrient-rich food.

Plants, people and the soil are part of one food web, which is the web of life. The test of good farming is how well it works to increase the health and resilience of the food web.

Dr. Vandana Shiva is a philosopher, environmental activist and eco feminist. She is the founder/director of Navdanya Research Foundation for Science, Technology, and Ecology. She is author of numerous books, and has received numerous awards, including 1993 Right Livelihood Award (Alternative Nobel Prize) and the 2010 Sydney Peace Prize.