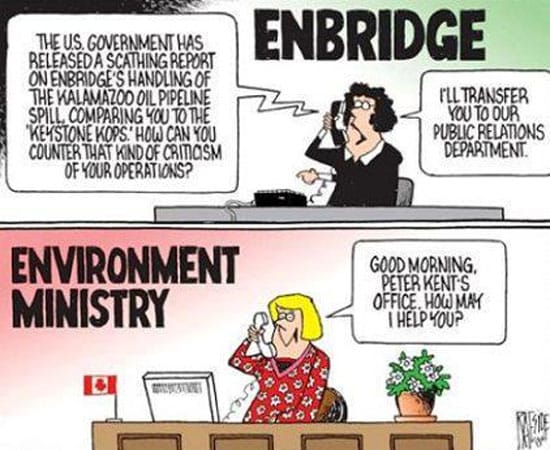 And just in case you think this is an exaggeration …

A scathing report out of the United States that criticized just about every aspect of Enbridge Inc.’s response to a pipeline spill in Michigan won’t change the Canadian government’s support for the company’s proposed Northern Gateway project, the federal environment minister said.

A report by U.S. investigators released last week concluded Enbridge bungled its response when millions of litres of oil began to pour in and around the Kalamazoo River in July 2010, comparing the company’s handling of the spill to the “Keystone Kops.”

The report has provided fuel for critics of Enbridge’s pro-posed Northern Gateway project, which would carry crude oil along 1,170 kilometres of pipeline from Alberta to B.C.’s coast. Even B.C.’s premier has demanded answers.

But the report won’t change the opinion of the federal Conservative government, which has hailed the Northern Gateway pipeline as important for the country, said Environment Minister Peter Kent.

“Pipelines are still, by far, the safest way to transport petro-chemicals in any form,” Kent said in an interview Wednesday.