Despite attempts by the Canadian company to divide indigenous communities, a new agreement will ensure that Bolivia’s resources are used to benefit the country’s people. 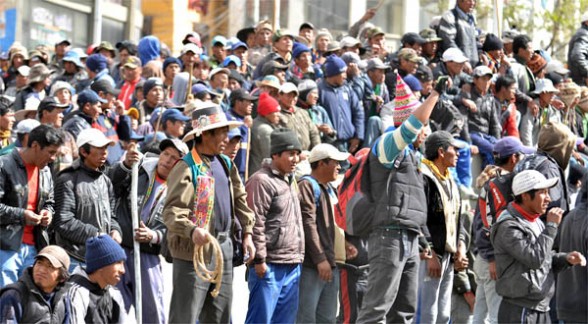 People from Mallku Khota rally in La Paz. The Mallku Khota project has been described as “one of the world’s largest undeveloped silver, indium and gallium deposits.”

President Evo Morales applauded on Tuesday the agreement struck with indigenous peoples from the mining town of Mallku Khota, in the north of Potosi, because it assures the state will be able to continue recuperating natural resources to benefit the Bolivian people.

The head of state met with leaders from the ayllus in this region that were demanding the annulment of the concession granting to the Canadian company South American Silver (SAS).

The agreement states that the mine will be nationalised via a Supreme Decree.

“These natural resources belong to the state, and therefore to the Bolivian people, which is why the national government should carry out the process of exploitation and exploration, with the participation of the indigenous communities in this zone; that is what we have agreed upon,” said the head of state.

Morales lamented that confrontations had taken place between different indigenous community groups, one side in support of te mining activities of the Canadian company, and considered that this confrontation was provoked by the transnational company.

“Here there has been a problem, unfortunately the so-called transnational companies are like that, these companies pit brothers, in-laws, cousins, neighbours, brothers from the same ayllu against one another, I also want to recognise that I too am responsible having not seen what was occurring,” he said.

Within this framework, he recalled the conflicts that were generated during the colonial era in order to facilitate the exploitation of natural resources.

“We have to remember our history, our grandparents who before the foundation of the republic gave their lives, gave their time for the lives of others, for the homeland and Mother Earth which is natural resources,” he argued.

Morales assured that the Bolivian people come from a family that defends natural resources and life, and called for the creation of new leaders that can continue this tradition.

“The people need honest and clean leaders that defend life, the homeland and natural resources,” he said, highlighting the youthfulness and preparation of the leaders of the Mallku Khota ayllus.

Regarding the death of indigenous community member, Jose Mamani, the president affirmed that those that go against life should be “punished,” and urged the Public Ministry to carry out a meticulous investigation. “We can not understand why some people infiltrate in order to use and confuse others, which is why we have also asked the Public Ministry to investigate the death of this community member” he added.

He also expressed his solidarity with the family of the deceased and ratified the government’s decision to help the family.

The agreement signed between the government and the leaders of Mallku Khota establishes the conformation of a legal-technical commission to elaborate the Supreme Decree reverting all the mining concessions granted to the mining company Mallku Khota, a subsidiary of the Canadian company, with the participation of delegates from both sides, as well as representatives from the government and the Potosi governorship.

It also suspends all exploration and prospecting activities and all forms of exploitation of minerals in the deposit.

According to the document, the state will take control of the Mallku Khota mining centre along the entire productive chain.

It guarantees peaceful co-existence, social peace and free movement within all the communities in the region, as well as stating that houses which were occupied must be returned to their legitimate owners.

It also establishes that the Public Ministry should attend to its functions by investigation the events that unfolded in the region.

It also promotes the elaboration and approval of a new Mining Law.

The nationalisation agreement puts to an end a week of conflicts promoted by community members who demanded the expulsion of the Canadian company.

In the midst of the conflict, the community members held 7 people hostage, among them, technicians that worked with the foreign company and a police officer, who were freed last Sunday after negotiations between the government and indigenous leaders from the area.